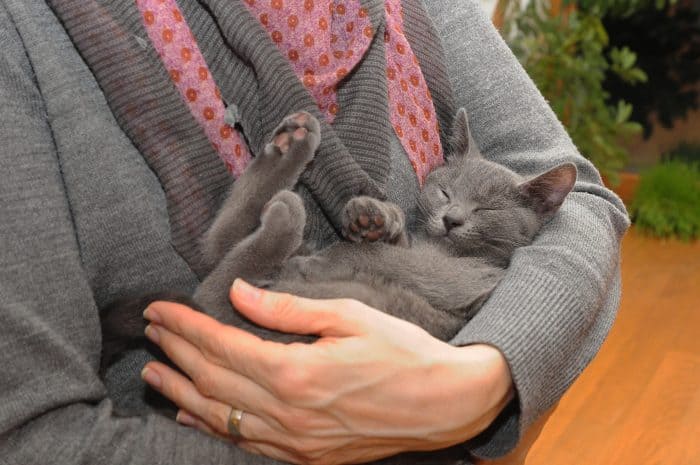 The adorable Chartreux Cat makes one great companion to have around you all the time due to their sociable and gentle nature.

Due to their unique head and body structure combined with their beautiful eyes and awesome personality traits they have become the talk of the town. Apart from their adorable appearance, these cute little creatures have left us amazed with many interesting personality traits as well.

So if you are planning to make the Chartreux cat a part of your family, you should know why these adorable beings deserve all the love in the world!

Take a look at this list of 13 reasons that will make you fall in love with your Chartreux all over again!

1. They have a mysterious smiling face 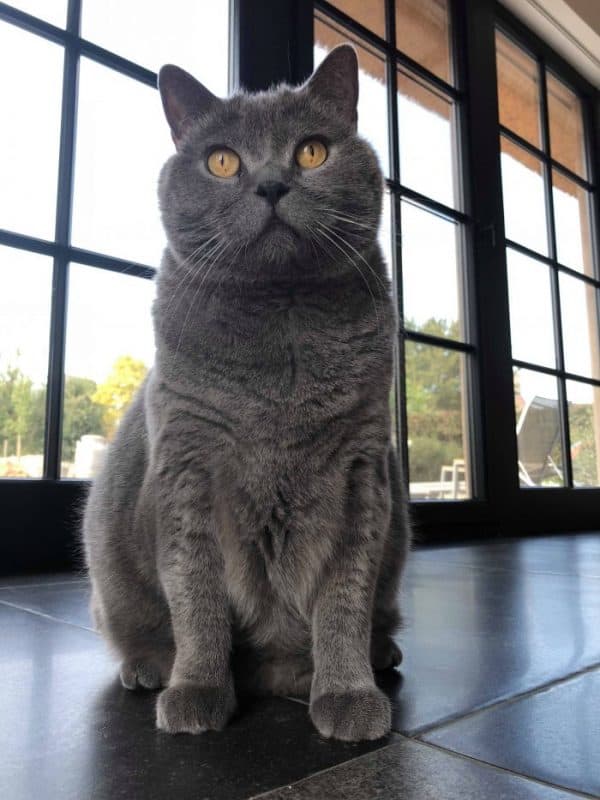 How often do you see a cat smiling at you? Well for most cat owners the answer is ‘Never’!

But, if you adopt the Chartreux, you will come home to an adorable smiling face every day!

These cats have a broad and well-rounded head structure, with a round shape forehead. Their cheeks are full and they have powerful jaws with it.

Their doe eyes have a slight depression among them with a relatively straighter nose and have medium sized ears.

This unique structure of their head and face gave them an always mysteriously smiling facial appearance.

Yes, that’s the case, no matter your beautiful Chartreux is sad or furious with you they will always appear smiling.

You will just love seeing them smile all the time and will also help you feel positive in difficult times and handle those situations calmly.

It’s great to have a lovely companion who will always be there to cheer you up through their beautiful and adorable smile.

2. They know their names!

Yes, Chartreux cats are among the few cat breeds that can quickly learn their name.

They not only just learn their name but will come running towards you whenever you call them.

They are highly adaptable to the surroundings, and loves spending time with you and can also stay alone for long periods if you’re busy with your work.

Give them a lovely and cheerful name that suits their lovely personality, and show them how much you love them.

Remember that giving a good and easily spoken name is crucial as you don’t want others to butcher their name while pronouncing it.

3. They have beautiful eyes

The Chartreux cats come with beautiful eyes with three truly unique and attractive color combinations, which are:

Having such unique characteristics make them easily identifiable from the rest of the breeds.

Many people wrongly believe that they can have green eyes as well, by mixing it with the other lookalike breed of British Shorthair.

Due to their thick double coat, they look bigger than many traditional household cats.

But they are not bigger in terms of height, in fact, they have a relatively short stature of around 9 – 11 inches.

They have a very muscular body shape and looks like a trained muscular athlete cat.

This extra muscle on their body helps them in being more agile and athletic than normal cats.

5. They have a unique double coat

The Chartreux has a unique double coat which is very thick and dense and is actually completely water repellent.

It means unlike other cats, they can easily come out completely dry after falling down in a body of water.

Their double coat is rougher in nature and gives you the feeling that you are touching a woolly sheep.

It is quite easy to keep clean, and the use of your fingers through their coats will do the job.

Usually, the male Chartreux coats are thicker and denser in comparison with their female counterparts.

One more thing, they only come in one unique color combination of blue-gray, with different variants from ash to slate. 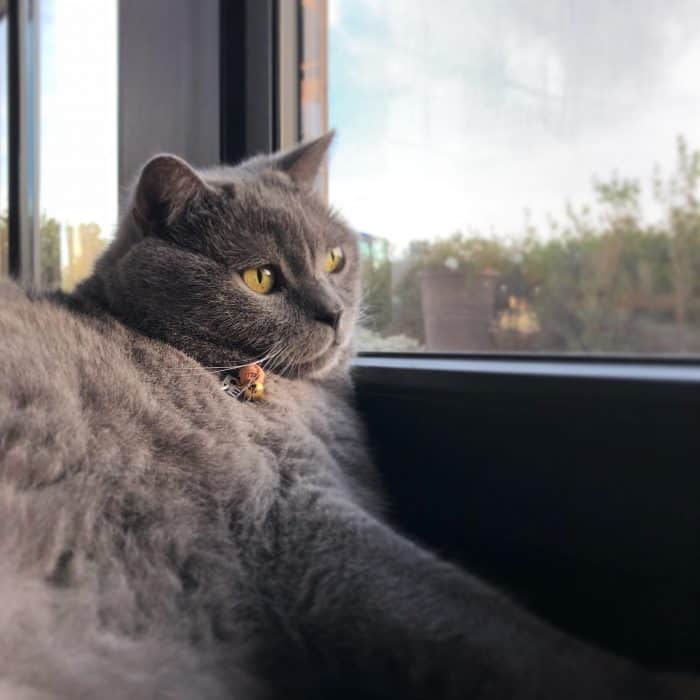 Looking for a quiet companion? Here’s what you need to know:

Chartreux cats are very quiet, and it’s been studied that many of them never made any sound throughout their life.

Even the most talkative ones in the breed make light chirps sounds and don’t meow like other cats.

Probably that was also the reason the French monks preferred them over other breeds, as they don’t like to get disturbed during meditation.

They are great for people who prefer relatively quieter companions.

But, remember they can’t call you for help if they found themselves in a difficult situation.

Due to their obedience, loyalty, and ability to willingly follow your commands, they are often called as dog-cats.

They are much like the dogs, they build strong bonds with you and will follow you around wherever you go.

They are very obedient and highly sensitive about how you treat them, whether it’s praising or scolding.

Be polite and gentle with them and see how much love they will give you back.

At first, they will observe the strangers from a distance from their secret hiding place and won’t come out until you call them.

But that doesn’t mean they are like other cats who don’t want to be around with other people.

They will build strong relationships with people, provided you introduce them to strangers, and there is mutual respect in the relationship.

Worried about having a pet cat in a family with children?

If you have children or kids who come often to your place, then adopting the Chartreux cat might be the best decision for you.

As you cannot ask for a better, gentle and friendly pet for your little humans than the Chartreux.

In fact, you might become jealous by seeing the level of love & affection they give to the little ones in comparison with the other adults.

If you have a Chartreux cat at your home then forgot about watching TV or movie on your laptop alone.

Whenever they find you watching something they will automatically come straight to you and will sit down on your lap.

They are very affectionate and will be your lovely lap pal while watching your favorite TV series or movies.

The Chartreux cats are very intelligent and sharp, which is the necessary requirement for being great at hunting.

They like to play with you in small sprouts and take some naps between.

They usually love to play the same games and like to play the fetching games which is another reason they are called dog-cats.

Give them interactive toys that will help them to further enhance their abilities, and will also help in burning the excess calories to keep them active and healthy.

12. Don’t get involved in fights

If you have other pets, don’t worry about leaving them alone with your Chartreux cat. Here’s why: 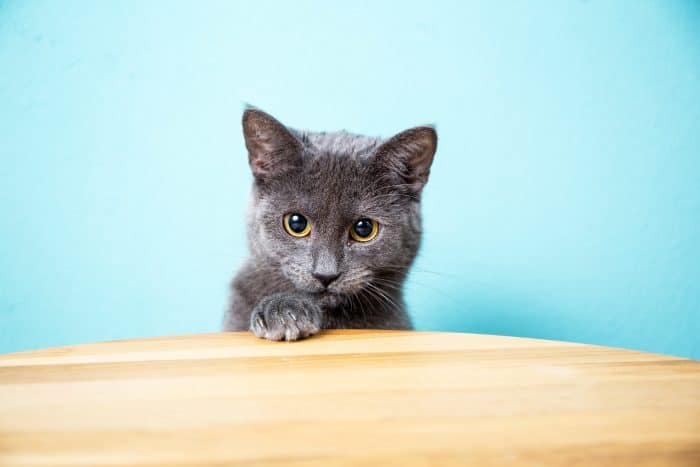 They are one of the calmest cat breeds in the world and also, highly adaptable. The best thing is that they do not get agitated quickly.

In fact, they are known to build good relationships with other pets, it doesn’t matter whether they are big or small.

They never start any fight, nor take part in any, but seeing their calmer personality often helps the other pets to calm down as well.

So if you are still looking for more reasons to love the adorable Chartreux, you should know that they have a very rich history and also, they are very rare!

Want to know more, here’s why:

Various documentation has shown that the Chartreux cats were bred by the Carthusian monks of France, in the early 16th century.

They were used as a working cat in the monasteries of the monks to keep the vermin away.

Well known for their exceptional hunting abilities, they help the monks in keeping their grains safe from the rodent population.

With the passage of time, they gained an esteemed place in the upper echelons of society.

They are still very rare due to the breeding restrictions imposed by the elite people during that time.

They made their entry in the United States during the year 1970, and the received full recognition from all the cats association in 1987.

Q. How can you tell a Chartreux cat?

The Chartreux cat’s unique appearance and friendly nature make them an ideal companion to have.

Here are a few methods to easily identify whether your cat is Chartreux or not:

Q. How big does a Chartreux cat grow?

They are more solid and have a very muscular body shape, and a mature male typically weighs around 7 – 16 pounds.

They seem to look larger than your traditional household cats, but have a shorter stature with a mature male being around 9 – 11 inches in height.

The males are usually the slow growers and can take up to 3 – 4 to reach their maximum size.

Their coat’s texture depends heavily upon their gender, age, and the environment they are kept in.

Whereas, females and less than two years old are allowed to have thinner coats.

Q. Can a Chartreux have green eyes?

Most people mix them with the other similar breed in looks the British shorthairs.

That’s the reason many claims that they have seen the Chartreux cats with green eyes.

But in truth, the Chartreux have only three color eyes, namely brilliant orange, gold, and copper.

While the British shorthair do have green eyes, but they can also be differentiated by the Chartreux through their fur coat.