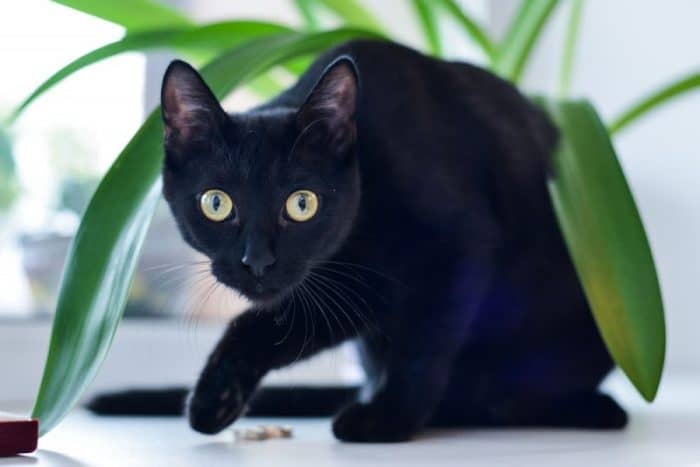 The jet black Bombay cats are adored by many for all the right reasons.

These cats, because of their traits and other physical characteristics, have brought joy to many people.

Let’s find out why do human have a lot of love for Bombay cats.

23 fun facts you should definitely know about Bombay cats: Bombay cats were named after a port and were born to look like leopards, they are famous as little black panthers. Their appearance is deceiving. Bombay cats have a coin like eyes and stare a lot. They like to be in warm places and love food and water. Continue reading for more fun facts.

Bombay cats are well known because of their physical appearance and inquisitive nature, but still many people have no idea about who Bombay cats actually are, as these little cats are good at deceiving others

Let’s have a close look at Bombay cats personality and other fun facts.

1. Bombay cats are named after a port 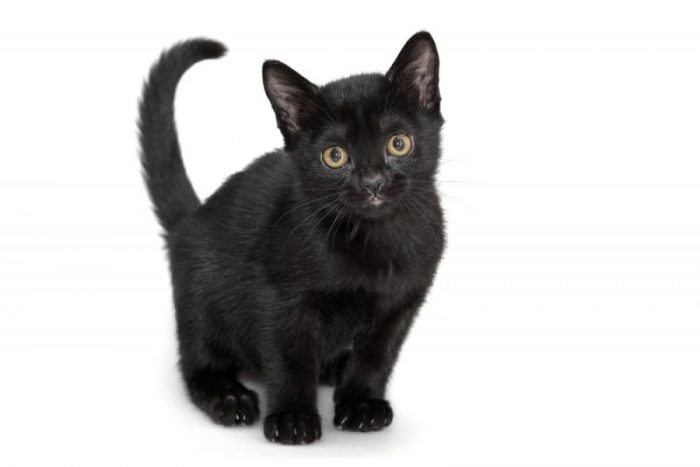 Bombay cats were given this name not because they were born in India for the first time but because of the inspiration.

Bombay cats – a name that was given to this particular breed because of the inspiration form leopards in India. So basically Bombay cats are named after a port in India where leopards are common.

Though the person who named them wasn’t from India.

2. Bombay is not a natural cat breed

Bombay cat breed did not exist until the 1950’s. It was in the late 1950s when the Bombay cats were born as a result of a breeders’ experiment.

4. Bombay cats are entirely black, but some Bombay kittens have white hair

There are some changes that occur, not only in humans but in pets too. Bombay kittens, after their birth, are not completely black. In fact, Bombay kittens have some white hair. However, these white hair disappear as the cats grow and that is when Bombay cats become totally black

Bombay cats have a deceiving appearance. A famous proverb that I can recall while thinking of Bombay cats is NEVER JUDGE A BOOK BY ITS COVER.

Yes, you read it right.

Not only their nature is different, but also their physical appearance in terms of their weight. When you pick up a Bombay, you will realize they are way heavier than they look.

Unlike many other cat breeds, Bombay cats are heat seekers. Whether its summer or winter, you will find your Bombay cat in a warm place such as a sofa, blanket or on your lap.

Being heat seekers, doesn’t mean that Bombay cats are not found in colder areas, or they die in winters. Not at all. These cats have a longer life span, but in winters they like to stay home and snuggle in a warm place.

Many people are attracted to Bombay cats because of their unique appearance. Most people like their eyes. Their eyes are like buttons or coins and are mostly wide open, which gives them a surprised look.

The button-like rounded eyes are mostly of golden or yellowish color, after four months of their birth Bombay cats’ eyes begin to look orange or copper and sometimes greenish or even blue.  These magnificent eye colors with jet black coat look wonderful.

Bombay cat do not only have coin or button-like eyes, but they also have big eyes. The wide eyes and long ears make Bombay cats appear surprised as if they just heard some shocking news or saw something really amazing or horrible.

Bombay cats have a bad habit of staring a lot. They might stare at someone or something for hours, more so the person might start to feel uncomfortable because of their gaze. But the good point is Bombay cats do not stare a lot because they want to hurt someone or they are making a plan against you. Though the intentions are not bad, still we are not pretty sure what’s going on inside their mind. In fact, it is said Bombay cats stare just because they are studying something and trying to learn more about it.

Like many humans, Bombay cats are foodies too. It is not that they eat every kind of food, but whatever is given to them, they eat a large amount of it. Bombay cats don’t have control over themselves when it comes to eating food.

The worse that can happen to Bombay cats because of overeating is that they may start suffering from obesity. Unfortunately, many cats are prone to obesity or being overweight due to eating  large amounts of food.

The best thing you can do is control their diet by providing them an appropriate amount of food. Secondly, keep a fixed time for their eating and decide how many times they are going to eat.

One of the most exciting things about Bombay cats is that they like water and love to be in the bathtub. Keeping in mind, Bombay cats like warm water, neither hot nor cold. So always check whether the water is warm or not. And change the water to after some time as it gets cold.

Secondly, don’t leave them alone in the bathtub as it can be dangerous, either be with them all the time or check them from time to time

Bombay cats prefer sleeping on a comfy bed rather than on the floor or any other place. Maybe they like to sleep with the owner on the bed or perhaps it’s comfortable and warm enough. You might don’t like it and want them to sleep somewhere, but they don’t listen to you and come back to the bed even after you have shown them to the right place to sleep.

Bombay cats may look like  independent cats, but they are totally opposite of it. They don’t like to be alone. They are pretty social and dependent on others. They accompany others and want to be the center of attention.

If you rarely stay home and you are always busy, then having a Bombay cat won’t be the best decision. Bombay cats are sensitive too, and do mind when you leave them alone.

Bombay cats not only like to be around people but more specifically, they like to cuddling on your lap. They want your attention and love; that’s why they come and sit on your lap. Bombay cats want to have a conversation you or might see just what you are up to.

Bombay cats are active and love to play. They do not only play with toys but with children too. So if you have a child at home, then Bombay cat can be the right choice. Keeping in mind that Bombay cats do sometimes become threatened when they cant get along much with children

If you already have a dog and planning to own a cat, then a Bombay cat is undoubtedly the best option for you. Unlike other cat breeds, Bombay cats can easily adjust with dogs and are friendly to other animals too.

There is another exciting thing about Bombay cats; they also showcase dog-like behavior.

Not only Bombay cats can adjust with dogs, but they do sometimes show dog-like behavior. They will follow you and will even rush towards the door when the bell rings. 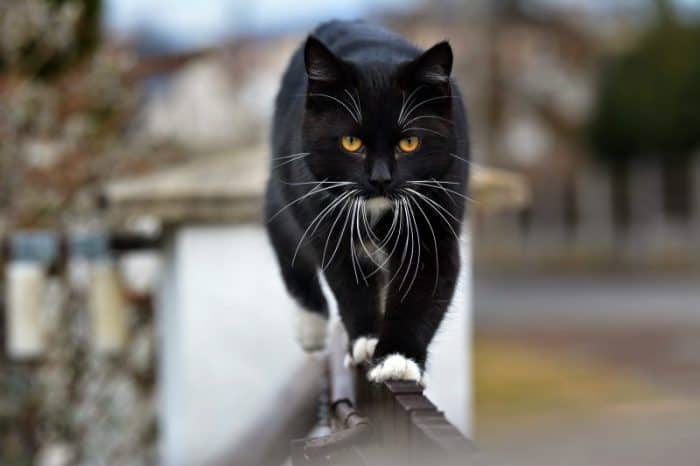 Bombay cats have got a charming walk. Their unique style of walking is pretty famous; many people notice it the first time they see Bombay cats. Bombay cats’ are different from other cat breeds because of their walk.

19. Bombay cats don’t need much time in terms of grooming

Bombay cats are easy to groom. These cats are pretty intelligent and smart; they learn things quickly.

Having a short coat is an advantage too, their hair doesn’t shed much. Unlike cats with long hair, Bombay cats don’t need a lot of time for grooming. You don’t have to brush them every day. Even giving them a bath once a week is enough. Neither do they get dirty nor do they look messy and that because of their color.

Also, Bombay cats are healthy. They rarely get sick but they do tend to get obese easily.

Bombay cats are vocal and have a very different meow. Through their meow, Bombay cats express emotions. These black Bombay cats are talkative, and they meow just to start a conversation with you. They will meow before jumping into your lap or when they need attention.

However, Bombay cats are not loud or noisy at all.

21. Bombay cats are smart and intelligent

Bombay cats learn things quickly be it a toilet training or any other thing. They understand whatever you tell them and respond appropriately. Many Bombay cats even learn new tricks too.

22. Bombay cats can do magic

Yes, Bombay cats can do magic but in a beautiful way. They know how to win your heart, and they do it quite easily. Isn’t that magic? Bombay cats do not only win your hearts but make you fall in love with them too. They are really affectionate and our social. They learn how to take care of you and cheer you up.

These were 23 fun facts about Bombay cats. Let me remind you here that these are just some general characteristics that Bombay cats show or have, but it isn’t necessary that all Bombay cats behave in the same way. Individual differences and exceptions do exist.

23. Bombay cats can cause fewer allergies

Unfortunately, Bombay cats are not totally hypoallergenic, but yes Bombay cats shed little hair and then need less grooming as compared to other cat breeds which eventually saves you from allergies to some extent.

Does the Bombay cat hair color change when they grow old?

It’s natural; some cats hair color changes to grey when they grow old. So is with Bombay cats. When Bombay cats grow really old, their hair color might start changing from grey to black.

Which cats breeds are hypoallergenic?

The truth is that no cat breed is totally or entirely hypoallergenic, though the chance of having allergies because of cats may vary depending on cat breed.