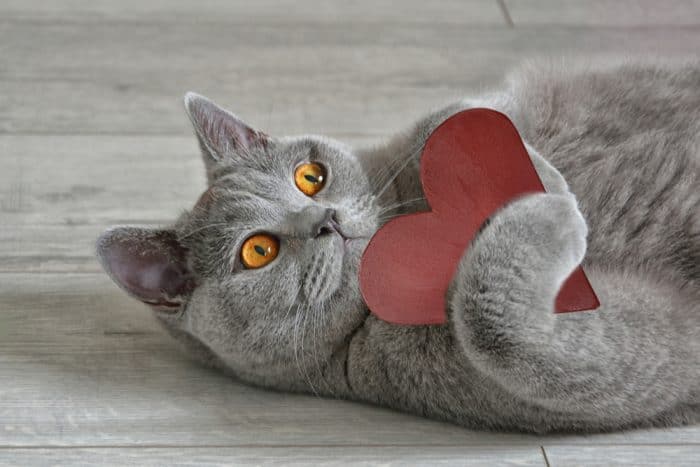 British shorthair cats are an absolute delight to have in your house. They have the cutest round features and are great loving companions.

If you plan to get a British Shorthair or already own one, then it is important to know everything about them!

So, before you decide to go for this breed, here are 23 facts that you should know about British Short-hair cats. 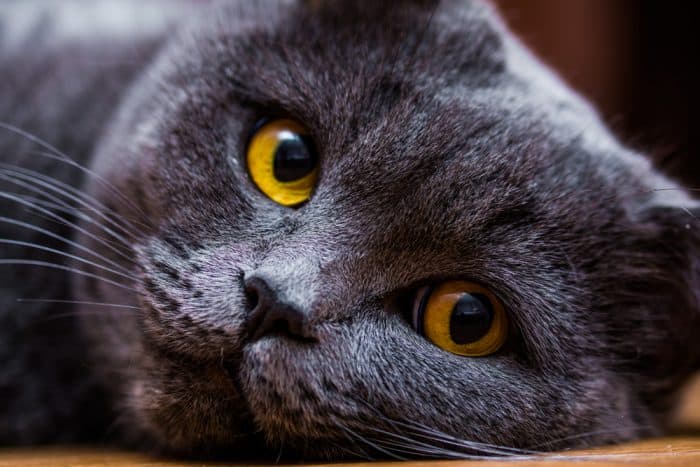 The British Shorthair cat have Roman origins! However, in those times, this cat breed was mainly used to protect food supplies.

There was a huge problem with rodents eating food and infesting houses. Keeping this cat was an ideal solution for people during the era.

Although it is now one of the most popular breeds in Great Britain. Many people in the UK have this cat breed in their homes, and it is loved dearly!

2.   The Breed Was Known for Hunting

If anyone has ever owned the British shorthair cat, it must be shocking to know that this breed was known for its hunting skills.

Their heightened senses ,sight and hearing abilities,helped them to locate food at great distances.

You are likely to find a ”modern day’ British Shorthair lounging around the house. They have selected play times and get excited by catnip!

Safe to say they have not evolved as hunting cats at all.

3. They Were Almost Extinct

As the long-haired cat breeds grew popular; the spotlight was stolen away from British shorthair cats.

Breeds like Persian and Himalayan were much more popular, and breeders stopped investing in British Shorthairs.

This really lowered their population. However, in the 21st century, it regained popularity, and now it is one of the most commonly owned cats in America and Britain.

4. They Come in Shades of Grey

Most pictures you see of a British shorthair cat is in Shades of Grey! They are usually all gray or have a blueish tint to their fur.

However, due to selective breeding, now British Shorthairs have gold, red, black, and even pure white fur!

They used to have copper eyes, but now due to the variation, you can also find British Shorthairs in blue and green eyes both!

One of the most important things to know about a British Shorthair is how it is very specific about affection!

They will only come to you when they wish to, and they don’t bother their owners, but they love them from afar.

In addition to this:

You will see them following you around, but they will never sit for cuddles or enjoy being in your lap or getting petted too often.

As an owner, you get used to the behavior of your cat overtime and adjust to the ”time to time’ affection schedule as well.

Given their particular criteria for affection, it is easy to assume that this breed is quite the moody breed.

They like particular things and do not indulge in typical cat activities either. You will not find them running around or jumping.

Their favorite hobby is to have ‘their’ me time’ where they sit, relax, and enjoy their sleep curled up in a ball.

You simply cannot force them to do anything they don’t want to themselves!

Unnecessary activities or cuddles are all off the table until they decide to do so. 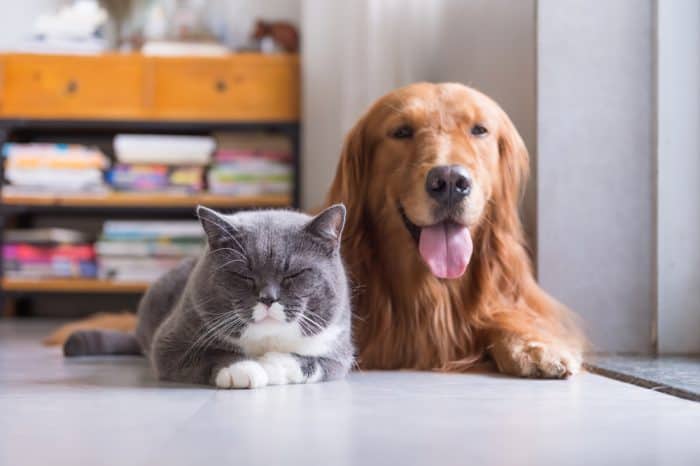 While these cats are moody. They are also known to be one of the chilliest cat breeds out there.

As mentioned, their favorite hobby is to lounge around; they do not like to interfere with you or the other pets that you might have around the house.

Yes, British Shorthairs are very good with other pets.

They might be reluctant to befriend them at first; however, they adjust easily with all kinds of cat breeds and even dogs!

8. Have A Long Life Span

You will be surprised to hear this:

Yes. That is much more than the average lifespan of a cat.

They maintain their health but often suffer from weight gain, which can shorten their life span.

They are good groomers. You will find them cleaning their face, ears and paws regularly.

They hardly develop health issues unless their diet and activity are really neglected.

10. Have one of a kind features

British Shorthair cats have one of a kind features! They are most known for the round face, stubby legs, and floppy ears.

Their hair makes them look chubby, and most people love that look.

It is one of the many reasons it is such a popular household cat all across the globe.

Owners love taking pictures of them! In fact, many famous Instagram cats are British short hairs.

Intelligence is a key feature for British shorthairs. They are aware of their surroundings and can very well recognize their owner’s voice.

They can also sense if the owner is in distress and will quickly come to your aid.

They are quick to learn to use the litter, navigate around the house, and respond to their names!

Owners tend to love how aware British Shorthairs tend to be.

British Shorthairs are considered to be great family cats!

Why is that so?

If you have other cats or babies in the house, then opting for a British Shorthair is probably the best decision you will make!

They are not likely to wreak any havoc, aren’t hyperactive and in general like their peace and quiet.

They are also gentle around babies and other cats or dogs you possibly have. You can count on them to mind their own business.

13. Have issues with weight gain

One of the leading health issues with the British short hair’s is their weight gain.

They tend to overeat and do you enjoy eating a lot for the time to time.

This leads to a shorter life span. They put on weight very quickly as they enjoy eating a lot and in addition to that, they are not very active.

As an owner, it is essential to keep a strict check on their diet and not letting them eat necessarily.

14. Known as The Bulldog of the Feline World

It will be surprising to know that:

The British Shorthair is most popularly known as the bulldog of the feline world!

This is usually due to their weight gain. As British shorthairs age, they tend to grow a belly.

This belly gives them a ”sausage’ like shape as most people describe.

Their round faces, stubby legs, and a visible belly can give them a unique look, often resembling a bulldog.

15. They Are Internet Famous 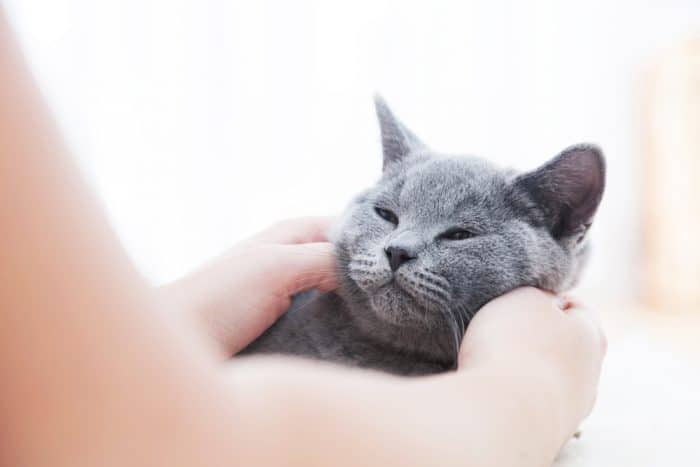 British Shorthairs are Internet famous cats! These cats reached the heights of popularity in 2007 when they appeared in a meme called ”I can have Cheezburger.’

This was when the world started to recognize the British Shorthair for its adorable features.

There are also a lot more famous Instagram cats who are pure British Shorthairs.

16. One of the Most Famous Cats all Around the World

The British Shorthair is definitely one of the more popular breeds in the 21st century!

It an ordinary house cat for Eastern European countries and the, of course, Great Britain.

It grew so popular in the United States that their own species evolved over time; The American shorthair! Which is similar to the British Shorthair in a lot of ways

This is also the reason it is topping the charts for the most bred cat species.

These chubby cats have inspired many animators and artists to make similar characters. One of the popular characters is the cat from Alice in Wonderland.

The British Shorthair is an ideal cat for those who do not like hyperactive pets. This cat loves its peace and quiet!

Their favorite activities include:

Lounging around in their favorite spot of the house, Enjoying the view from a nearby window or having a snack.

They have very specific times to play and cuddle. Otherwise, you are likely to catch them enjoying their own company.

As round as these little furballs look, they do require a certain amount of grooming.

They shed a lot, especially as they get older. As the name says ”short hair,’ It isn’t likely for you to face knots and a lot of furballs.

They do not require a lot of baths or pestering with their daily hygiene. They are quite particular about it themselves!

20. They Have an Inbuilt Smile! 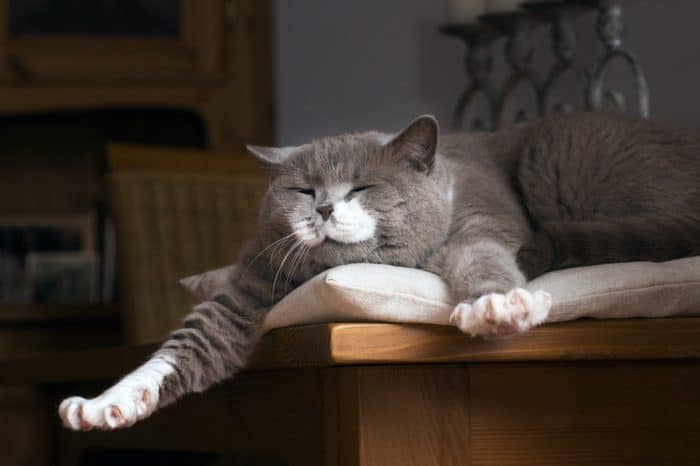 But Yes! They have an in-built smile on their face. This is mainly due to the placement of their whiskers.

This smile feature is what also makes it a loved cat breed across the world.

If you already own a British Shorthair, notice the slight curves at the end of their whiskers, that make it seem like their smiling at you!

Anyone who owns a British Shorthair is aware that this cat likes to establish who is Boss in the relationship.

They might be unbothered most of the time, but when it comes to asserting dominance and showing who the Boss is; they can do that as well!

They do not like when someone annoys them, especially if they are resting.

If you pick them up or go against ”their mood’, then it is likely that you will not have any success.

It is best to allow them to function at their own pace.

They also might get easily triggered and violent if you were to annoy them too much.

22. One of the Most Expensive Breeds

This is one of the cat breeds you will find to be sold in the ”luxury cats’ section.

While you can purchase it at lower costs starting anywhere around $100 to $200, a proper breeder sells them for a lot more!

They are a pedigree cat and often recognized as a symbol of luxury!

Do not confuse their distance with lack of love!

British shorthairs love their owners a lot! They are moody, but when they want their pets and cuddles, there is nothing more adorable!

They won’t leave your site and will circle around you until you give them their dose of attention.

They will instantly notice if their owner is visibly upset, rest assure they will come to your aid!

At the same time, don’t have a ”Me me me’ personality either.

They are likely to leave you alone after they have had their preferred amount of love.

Your British short hair will enjoy affection but not at all times. They love their owners from afar! They get along well with children and other cats too.

A British Shorthair cat costs anywhere around $70 to $100. However, a breeder is likely to charge you up to $1500 for a pure breed.

Is British shorthair an indoor cat?

British Shorthairs are indeed home-loving cats! They aren’t very fond of the outdoors and love their peace.

Does a British shorthair shed a lot?

Yes! They have a double coat fur. The underlayer sheds hence their grooming is essential.