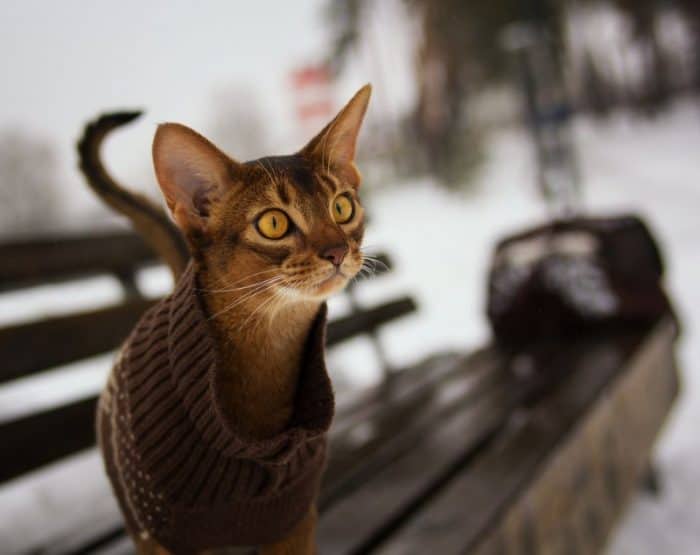 I have been fascinated with Abyssinian cats ever since a friend of mine gave one to me. In this article, I will share what I have learned about the cat and its history.

So what should you know about the history and origin of Abyssinian cats? These cats are believed to be descendants of a specific breed that was regarded quite highly by the ancient Egyptians. Their recorded history goes back to 1882.

It is always interesting to know more about your pet. Thus, we are going to provide you with some details regarding the origin and history of Abyssinian cats.

More about the history and origin of the breed

The Abyssinian cat is among those breeds that are preferred by quite a lot of passionate cat lovers in the world. Thus, their history is bound to generate some curiosity. Let us shed some light on it.

Origin of the Abyssinian cats

A lot of theories can be found regarding the origin of this breed. One of the most common beliefs that have attained popularity is their association with ancient Egyptians. It is believed that these cats are descendants of a cat breed which was regarded highly by ancient Egyptians.

If you have ever seen pictures of cats carved on the walls of the ancient Egyptian civilization, you will have noticed the glaring resemblance they bear to Abyssinian cats.

Some others believe that this breed is a descendant of the African wild cat.

While geographically, both theories hold some merit, the evidence is inconclusive to support either. Thus, the true origin of Abyssinian cats remains a mystery.

History of the Abyssinian cat

Official record with regards to Abyssinian cat originates from 1882. This is when a cat, Zula, was brought from Abyssinia to the UK. It was presented to the UK by a captain of the British army, Captain Barrett-Leonard who was posted in Abyssinia during the time.

While the origin of these cats might remain a mystery, it is well-established that the breed enjoyed immense popularity in the UK for nearly a century.

The breed managed to make a mark in the history of the country as it acquired mentions in significant pieces of work. These include The Book of Cat by Frances Simpson in 1903 and The Standards of Points by Harrison Weir in 1889 among others.

Thus, these cats can be counted as one of the oldest breeds of cats to be documented. This reflects on the popularity that they have attained in the current times.

While there is no denying that this is undoubtedly a fascinating breed to keep as pets; it is essential to know more about their specific characteristics.

This will make it easier for you to decide whether you can indeed manage them properly.

If you are looking for a gentle cat with whom you can cuddle all day long, this is not the breed for you. These cats are quite intelligent who love interacting with strangers and playing around.

They possess impressive skills in watching humans. It does not take long for the cat to make its owners follow it.

If you want to ensure that your cat remains happy, it would be a good idea to give it some puzzle toys that require intelligence. You can also teach it some interesting tricks or get it involved in some course.

Is it safe to get an Abyssinian cat in a home with dogs and children?

Yes, these cats tend to gel well in families with dogs and children. The breed loves attention and thus tends to get along with children well. However, it needs to be ensured that the kids treat it with respect and politeness.

The cat tends to stay out of the way of the toddlers and prefers to be in the company of young children who are old enough to go to school. These kids are able to match up to the energy level of the cat.

The cat does not shy away from being friends with dogs. You will also find them to be quite comfortable in the company of various other animals. These include parrots and ferrets among others.

However, you have to make sure that these animals are introduced in the setting gradually.

Pyruvate kinase deficiency is one of the most common health conditions that owners of this breed need to be aware of. It is a hereditary condition in which the cats suffer from intermittent anemia due to deficiency of pyruvate kinase.

Pyruvate Kinase is a regulatory enzyme which plays a role in energy metabolism in red blood cells. The condition can become apparent even as early as six months of age or at the age of 12 years as well.

The recessive gene responsible for the condition can be removed via DNA screening from the gene pool.

The clinical signs for the condition include:

Treatment of the disease is still unknown.

Other conditions that Abyssinians can suffer from include:

What should I feed Abys?

Their diet is not much different from other typical breeds. It is essential to strike a balance between dry and raw food while deciding on a suitable diet for the cat.

Therefore, it is vital to get the balance right if you want to make sure that your cat remains in optimal health.

If their diet comprises of dry food alone, they will encounter health conditions related to the kidney. On the other hand, if you give them only wet food, they will end up suffering from dental problems.

An important point to remember when it comes to Abyssinians is that they tend to take a tad bit longer to grow as compared to other breeds. Therefore, you might have to keep feeding them with kitten food for a longer duration.

Let us give you some examples of cat food that you can give them without any worries.

What does an Abyssinian cat look like? Medium in size, these cats have short, dense and soft coats. They weigh around 7 to 10 pounds if proper diet is provided to them. Their average lifespan is 14 to 15 years, assuming that they get optimal care. They are found in various colors including:

How can I groom my Abyssinians? These cats have short coats. Thus, grooming and maintaining them is not really difficult. It would be sufficient to groom it once a week, using a stainless steel comb for the purpose. This would ensure that his coat remains shiny as the dead hair is removed.

You might have to trim the nails in around 14 days or so. It is important to brush his teeth regularly. Ensure that vets approve the toothpaste. Frequent veterinary cleanings are also mandatory.

What is the routine care that should be provided to Abyssinians? If you want to ensure that your Abyssinian cat remains in optimal health, you need to make sure that proper care is provided to it.

How much does it cost to get an Abyssinian cat? This largely depends on who you purchase it from. Usually, it tends to cost somewhere around $800 to $1000. It is advisable to buy the cat from a well-known breeder. This is because he would be able to guide you about the care of the cat properly.

It is advisable to purchase from someone who has a profound reputation or has a recommendation. This will ensure that you do not end up being duped to purchase a sick cat.