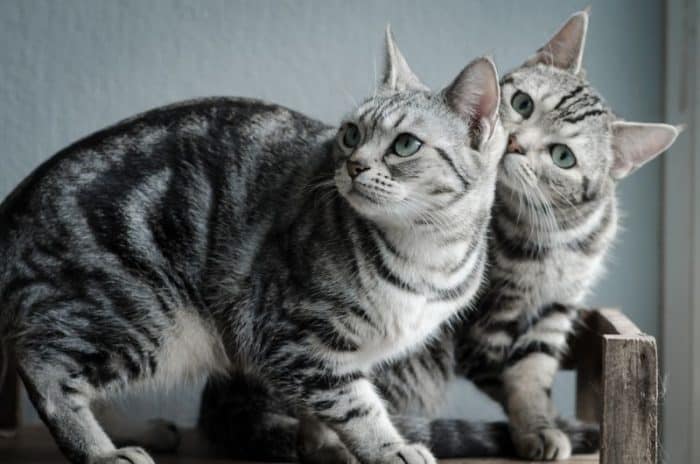 American Shorthair cats are said to be more than just a common domestic housecat. Their physical and behavioral traits are all well-loved throughout the feline-keeping community.

Like any animal, American Shorthair Cats also only show their best attitudes when they are healthy and taken care of. You need to know the basics of American shorthair cats in order to give them the best lifestyle possible.

The personality of American shorthair cats couldn’t be any more perfect.

They are the perfect balance between shy and friendly.

You wouldn’t have to worry about paying attention to these cats all the time.But at the same time, they won’t be too reserved.

American Shorthair cats are very laid back. They don’t mind anything at all unless it’s really bothering them. Most of the times, the cat will be on its best behavior. Even when guests are visiting, it will not panic as long as it isn’t triggered.

These well-behaved cats know their boundaries. They’ll respect your orders but will also expect you to respect their space. Provide as much space as you can, so that the cat can relax when she’s feeling overwhelmed. Moreover, give her toys, a scratching post, and good food. Neither will she damage your furniture nor will she create a nuisance if you do.

I, in particular, had an American Shorthair who scratched open all of my furniture and cushions. That was until I bought this really cool cat scratching post. It has really helped me provide my cat an outlet for its natural urge to scratch and has saved me a couple of sofas in the process.

American Shorthair cats are very accommodating. Their relaxed temperament remains so for the most part. If you notice your Shorthair cat getting agitated, there is probably a good reason behind it. They’re smart and mostly on the mellow side. However, it’ll always love some playtime too.

It is recommended to encourage your American Shorthair to be as active as possible. This way you’ll minimize risks of obesity. A fun activity will also always be a mood booster for your pet.

It won’t be wrong to rename American Shorthair to Adaptable Shorthair.

It is second nature for these cats to adjust which simply adds to their affectionate nature.

For the 2 decades that they live, American Shorthair cats will accompany you through every stage of life. You won’t have to worry about their changes with progressing age because the cat will adapt as per the situations. These cats will stick with you for a very long and happy time.

Throughout the years, you’ll be shifting places. Different people will come and go. You may even move from one city to another. Through all the environmental and social changes, these cats won’t budge.

American Shorthair cats are easy to train due to this quality. They quickly get used to the people around them. They can also adjust to whatever space is offered. Whether you’re in a one-room apartment or a mansion, you’ll find these cats to be comfortable everywhere. This specific reason makes American Shorthairs very easy to keep.

They are also great around other pets as well as children. The only problem will be with other felines or naughty children. As long as the kids don’t hurt the cat, there won’t be an issue. These cats will continue their friendliness around a well-behaved dog too.

Being aware of physical traits helps you:

As their name suggests, American Shorthair cats have a short hair coat. Despite the shorter length, the thickness of their fur is pretty dense. Paired with a lush coat, their unique face shape makes them even more beautiful.

These cats have a small face with a sharp jaw. The striped design all over their body is what makes them stand out among other cat breeds. With over 80 colors and unique patterns, every American Shorthair cat is different from the other.

American Shorthairs are medium-sized cats. Their average height is 14 to 15 inches. They grow between 6 to 15 pounds when they mature. The females tend to be smaller than males in most cases. Despite their small size, they are muscular and strong. Their estimated lifespan is 20 years on average for a healthy cat. However, you can always expect 15+ years for any American Shorthair who isn’t suffering from a fatal disease.

This breed of cats loves hunting and chasing. These traits encourage exercise which is highly important.Otherwise, American Shorthair cats can get obese easily. Overweight or not, their tails are always thick and round.

They have a very soft voice that complements their striking appearance. You’ll find their eyes to have a very intimidating look which is a feature loved by many cat owners.

Your cat, no matter how well-trained, won’t show the best behavior unless she is feeling healthy.

You must know that:

This means that there is little you can do to eliminate these risks, but you can always take precautionary steps to lower the impact. Since these cats are prone to developing serious conditions, you should schedule regular vet visits so that any possible threat is identified in the early stages.

American Shorthairs can gain weight very quickly. Obesity is one of the biggest health issues in these cats. This one issue can further attract a lot of other illnesses too. An obese cat can develop physical disabilities, arthritis, diabetes, and liver issues as well.

Dental diseases are yet another common problem. Food residue can lead to tooth decay along with chronic pain. Dental issues don’t just stop at teeth. Since the bacteria are being constantly swallowed, thestomach and kidneys can also be affected.

To prevent tooth decay, tooth loss, and bacteria from affecting internal organs, make sure your cat’s teeth are brushed regularly. Also, be vigilant of dental checkups every time you visit the vet.

Heart diseases are also a common issue in American Shorthairs. The most likely disease that your cat can develop is hypertrophic cardiomyopathy. It is caused by an overactive thyroid gland that leads to the thickening of the heart muscles.

As these cats are prone to gaining weight, you need to be extra careful with their diet. An obese cat will never be as friendly as a healthy and active cat.

I feed this cat food from Hill’s to all my cats who start appearing a bit overweight. Till now, their formula has always done the trick for me so if your cat is getting a little to fluffy, you might want to check this product out. Bear in mind that the formula is prescribed for cats aged 1-6.

What you can do to tackle this issue is buying specially formulated cat food that controls their weight, like the one that I linked to above. This table summarizes what such cat foods should include.

A groomed cat is a happy cat and a happy cat is a loving cat. American Shorthair cats have low grooming protocol.

Brushing the cat once a week should be more than enough unless something out of the ordinary demands otherwise. Use a soft brush and once in a while, a flea comb too. Naturally, these cats have a shiny coat. To maintain this, use a conditioning shampoo.

Brush your cat’s teeth regularly. You can also use refreshing treats to keep her breath smelling good at all times. Moreover, clip her nails at least once every month to minimize scratching accidents.

Are American Shorthair cats strong?American Shorthair cats are strong in both physical and mental fronts. They were actually bred with the intention of being cats who would control the rodent population. Since the motive was to make them fulltime working cats, they were bred to be very strong. High tolerance and thick coats are a known feature in these cats.