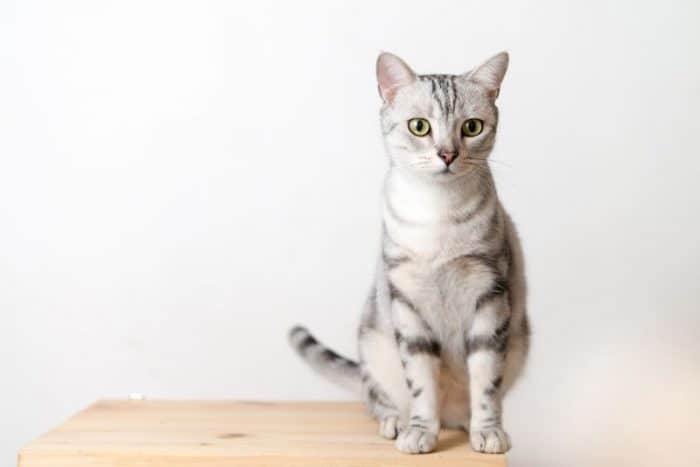 It is not an uncommon practice to have a dog and a cat in the same household. However, before adopting more than one pet, it is important to make sure that they can learn to live with each other.

This breed does not require extra grooming apart from the basics (feeding, weekly combing, etc.) The following paragraphs will discuss several other traits that make this breed an excellent pet choice for anyone.

American Shorthair is a wide-eyed cat with a broad chest and a muscular neck. Its size can vary from medium to large and it can live for more than 15 years. It comes with a short but straight coat that is found in a variety of colors viz. cameo, black, white, red, cream, etc.

American Shorthairs are calm cats with a friendly attitude. It has a relaxed temperament making it an excellent pet for families having children. These cats know how to keep to themselves without getting bored,but also enjoy playing with a playmate.

The cat’s social and laid-back attitude makes it one of the best breeds to have if you’re also a dog owner. The American Shorthair possesses a natural affection towards its family members which also extends towards other pets such as cat-friendly dogs.

Although the American Shorthair cat is known to be a good hunter:

It will not harm your pet birds if you introduce them to it at an early age.

These cats have a nonchalant attitude towards running, screaming children and like to play with them.

The American Shorthair cat isan intelligent cat that is known to adapt easily according to the family needs. Moreover, American Short hair does not require extra care.

Unlike others from the felinecommunity, the American Shorthair does not need inspection or interaction every other hour. It can be left alone unsupervised without having to face any undesired consequences.

If you are an office worker that’ll be away from home, then the American Shorthair is your perfect match.

The American Shorthair cats have a dense coat that comes in more than 80 colors and patterns. However, the most popular as well as common is the silver coat having black patterns.

Taking Care of your American Shorthair

American Shorthair cats are quite tolerant and friendly cats that don’t have special requirements as pets. However, these cats do require basic caring which includes:

The American Shorthair is a muscular cat and has a rather strict diet plan. These Feline friends have a close ancestry with the likes of lions and leopards that are carnivores. Therefore, these cats also have a strictly carnivorous diet.

Unlike dogs, the American Shorthair will not eat everything put in front of it.  These cats only live on fats and proteins and would not sustain their health if given a variety of foods.

Note:Carbohydrates cause serious weight issues in the American Shorthair. It should never be given carbohydrates because its digestive system is not designed to digest them.

Consulting a doctor is a good practice when deciding your cat’s nutrition. Whatever, you feed your cat, make sure it is prescribed by theAmerican Association of Feed Control Officials (AAFCO).

After deciding food for your kitty, make sure it likes it and that it is easy on the digestive system. If your cat is having digestive problems, such as flatulence, it means the food is not right for it. American Shorthairs can be quite choosy when it comes to nutrition and if they don’t like a food, they might even go on a serious hunger strike.

However, if the food is not right for your cat, you should not make an abrupt change. In fact, add increasing proportions of the new food in the old onethroughout the week. In this way, your four-legged pal would not have any dietary issues.

American Shorthair cats have a weight problem and can become overweight if left neglected. A lot of factors affect the quantity of food that you should feed your cat. It is best to consult your vet regarding a healthy proportion and strictly stick to it.

These cats like to have little portions of snacks throughout the day so keep a bowl within range so they can eat whenever they like.A good habit would be to pour half of the food before leaving for work and half after coming back.

It is a common misconception that the American Shorthair cats have a short dense coat, therefore, it requires little to no grooming. The truth is that almost all cats require grooming, some less than others depending upon their coats.

American Shorthair cats do not require much from the owner. Your cat will need a bi-weekly brushing (more frequently in the shedding seasons) with a stainless steel brush so that the dead skin and hair can be brushed off and the natural skin oils can be evenly distributed.

Periodontal diseases are quite common in cats, especially because cat owners are negligent of their pet’s teeth hygiene. Ideally, you should have a weekly brushing session. If not, your cat’s teeth should be brushed at least once in two weeks.

Bathing is not needed often. Bathe your cat only when it is extremely dirty and make sure to use a vet-approved shampoo that does not damage its coat or harm its skin. I would know since I hurt my poor baby with a poor choice for its shampoo. That is before I switched to this 2-in-1 conditions shampoo from EarthBath. Now, my cat smells better than I do (and I honestly have mixed feelings about that.

American Shorthair cats are not known to make a fuss when it comes to bathing them so they might need some convincing in that regard.

Lastly, use a damp cloth to clean your cat’s eyes (use different portions of the cloth for different eyes so an infection might not travel from one eye to another).Also, clean its ears when necessary.

Contrary to the prevalent notion, grooming also constitutes playing with your cat. American Shorthair cats tend to get obese and do not lose weight easily. Therefore, do not skip regular playtime so you can ensure the daily activity of your cat.

If an American Shorthair cat wants to play or needs your attention, be sure to expect a gentle love bite. These cats can have fun themselves but also love affection from their owners. If you are holding your American Shorthair, make sure you support its back feet so that it feels comfortable.

These playmates are quite intelligent and should not be bored with repetitive rounds of the same game. These cats love to learn new things and can also be trained to perform tricks.They love to figure out ways to get their treat from apuzzle toy.

American Shorthairs are listed among some of the healthiest cat breeds and have an average lifespan of 15-10 years. Nonetheless, these cats are known to develop hypertrophic cardiomyopathy (HCM). HCM is a heart disease which is quite common in cats. HCM causes the heart muscles to thicken.

Note: American Shorthair cats having HCM should not be bred and should be removed from breeding programs.

Other cats that are good with Dogs

If you’re still not sure if the American Shorthair is the best choice of cat for you, here are five cat breeds that are known to get along well with dogs.

Do American Shorthairs shed?American Shorthairs, like any other cat breed, sheds. However, the extent of this shedding can be reduced with regular grooming. A bi-weekly combing would ensure that all the dead skin and hair have been removed, giving the coat a splendor.How much does an American Shorthair cost?On average, the American Shorthair kitten can be bought in the range of $600 – $1200 USD. The price of the kitten can vary depending upon a number of factors such as its color, size, the splendor of coat, etc.