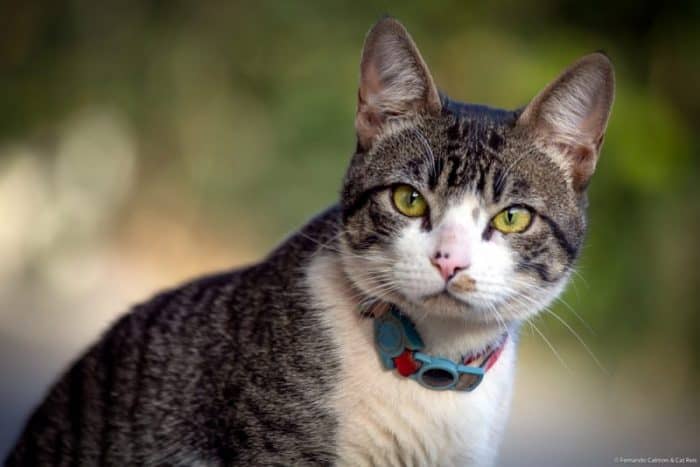 Curious about the major differences between the American Wirehair and the American Shorthair cats? Well, we are here to help you!

Here is a detailed breakdown of the similarities and differences between American Shorthairs and American Wirehairs.

The ancestors of American Shorthair were actually immigrants. They came on Mayflower with the early settlers and earned popularity during the 19th century. A series of pet shows and exhibitions served as a base for their popularity.

In comparison to that, American Wirehairs are the result of spontaneous mutations taking place in the cat world.

In upstate New York, the first wirehaired cat appeared. By breeding it with closely related cats, little kittens with wiry coats were obtained. American Wirehairs are said to be closely interrelated with American Shorthairs so, throughout the article, you will find more similarities between the cat breeds as compared to differences.

The following table further explains the similarities and differences between both cat breeds.

I must say that American Wirehair is one of the loveliest medium-sized cats available with sweet expressions and a springy wired coat.

The major difference between this breed and the American Shorthair cat is their coats.

The coat of American Wirehair is hard as compared to the American Shorthair. Wirehairs may come in many patterns or colors, however mostly their coat resembles steel wool. Due to its hard coat, shedding level is also low and combing activities might damage it.

Therefore there is no particular need to groom it every other day.

In comparison to that, the American Shorthair cat is quite versatile as it comes in a wide range of colors, patterns, and styles.

On average, it is assumed that the American Shorthair comes in more than 80 colors. Like the American Wirehair, it is also a medium-sized cat with a muscular appearance.

Like physical appearance, there are many similarities between personality traits of the American Wirehair and American Shorthair.

They are both friendly, placid, and easy-going. Wirehairs easily get attached to all family members and have a moderate level of social needs.

Unlike American Shorthair, the Wirehair does not always seek continuous attention. However, if they demand it, they will do so with the help of cute gestures.

American Shorthair, on the other hand, is in the continuous attention-gaining phase and it loves to be held. They can entertain themselves, are interested in learning, and love to play new things.

They enjoy the company of other animals as well. Likewise, American Wirehair cats also enjoy being with dogs and other animals. They are quiet and use expressions in case they need anything.

I must say that in terms of personality, both cat breeds resemble a lot.

If you are planning to buy an American Wirehair or American Shorthair cat, you need to carefully monitor the dietary habits of the two so that their nutritional requirements can be met.

It is essential that the cats must be kept in particular order so that possible issues such as obesity can be avoided. American Shorthairs can be kept preoccupied with the help of interactive games and an adequate level of exercise.

The appropriate diet must include a high level of proteins, moderate level of fats, and low carbohydrates. Moreover, the diet should also be filled with meat-based ingredients.

It is important to acknowledge that domestic cats are actually the descendants of wild ones, therefore, if they prefer eating in the wild, it should be of no issue.

People can either obtain commercial pet foods for American Shorthairs or they can offer them meat-based products. Some have also seen their cats hunt for rabbits, rats, and small birds.

There is no need to worry when Shorthairs turn wild and wish to hunt. It is their nature and it cannot be changed.

Likewise, American Wirehairs are also carnivores and they may reject non-meat-based food. They are decedents of panthers and are meant to keep rodents out.

Owners can purchase a commercial diet specifically formulated for American Wirehairs rather than giving normal pet food to these cats.

American Wirehairs are quite strict in their dietary habits, therefore people deciding to own these cats must acquire detailed information about their foods, before making the decision of bringing them home.

The major consideration for feeding American Wirehairs is that they should be fed a high-protein diet. In that regard, this cat food from Blue Wilderness is a top choice as it is exceptionally high in protein content.

The general life expectancy of both American Wirehairs and American Shorthairs is around 15-16 years.

Generally, both cat breeds are identified to be healthy, however, there are several problems that may arise with time, affecting the health conditions of these cats.

Hip dysplasia (abnormality of hip joints) and cardiomyopathy (enlargement of heart muscles) are amongst the most common diseases in the American Shorthair cat.

Mutation of the American Wirehair and the American Shorthair can also create Hypertrophic Cardiomyopathy (HCM), which may cause sudden death.

Therefore, while breeding the cats, special attention must be paid to the cat types, potential health concerns that may arise as a result of their breeding, and screening tests must be performed before breeding cats.

Obesity is another issue that may affect the quality of life and life expectancy of these breeds. The American Wirehair is prone to obesity and it must be the goal of every owner to assure the best health and lifestyle for their pets.

Controlled behavior and activity monitors can facilitate cats in this issue. Proper training must be provided to the cats in order to maintain healthy pet relationships. Eating the right amount of food at the right time and avoiding malnourishment can facilitate the purpose.

On the basis of a detailed overview of the similarities and differences of both these cat breeds, I can say that the American Wirehair and the American Shorthair resemble each other a lot.

They have minor differences in terms of the type of their coat, however, their social needs, shedding level, and personality traits are quite similar.

These breeds have devotion in their nature and they naturally develop affection towards other pets in the family. Their temperament and patience are exceptional, making them unique and friendly.

Therefore, if you want to make any of them a companion, you should go ahead without having a shred of doubt.

Inter-Pet conflicts can be a challenging situation for many owners. If the cats are social, then they can be interactive and care for one another. That brings peace of mind for the individual owner as well as for the rest of the family members. In times of need, the pets may take care of one another.

Their dietary habits are quite similar and they share similar health-related problems. If someone says that both the cats are first cousins, it won’t be wrong. Their striped appearance, attractive coat, and beautiful eyes make them similar in appearance. Both of the cats are friendly and can be the best companions for kids. Moreover, their eating patterns and preferences are also similar. Both of the cat breeds tend to hunt mice and rodents.

Are American Shorthairs and American Wirehairs affectionate? Yes, both the cat breeds are very affectionate, loving, and friendly. They have a placid temperament that makes them trust-worthy and perfect pets to be carried along with children.

Both the cat breeds tend to play with their owners and are keen to learn. Finding the missing pieces of puzzles, hunting the end of the fishing rope, and batting the feather of peacock are their favorite games. They love to spend time with people and score high in terms of affection level and adaptability.