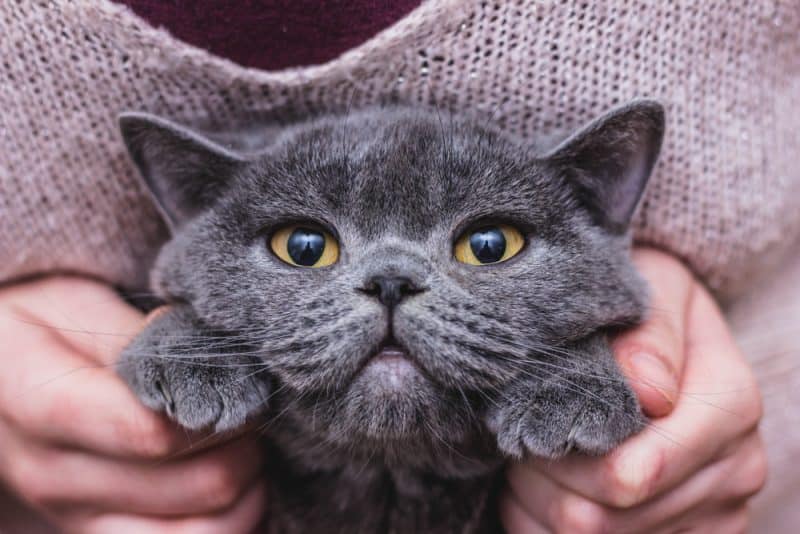 If there is one cat that is as British as a cup of Tea, it has to be the British Shorthair.

British Shorthair is a household breed in Britain and is therefore quite popular all over the world. And so you might be wondering:

Are these cats more friendly? British shorthair cats are friendly and affectionate. They are not like lap cats who like to sit in your lap, but British Shorthairs are, without a doubt, affectionate.

This is exactly the time where I ask you to stick around so you can get up to speed about the different behavioral patterns of your British Shorthair. 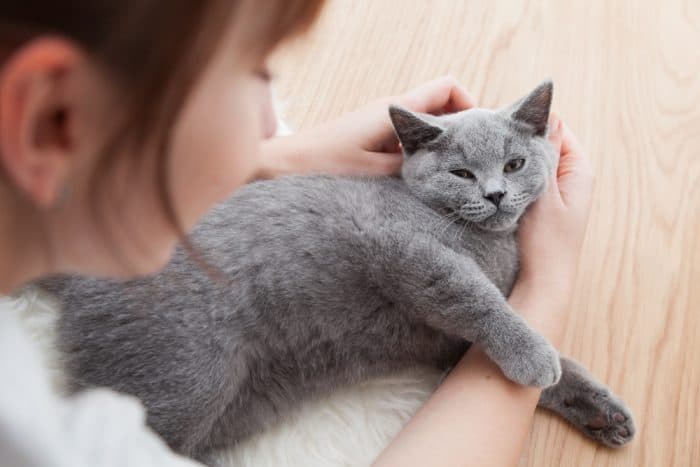 Take a good look at a British Shorthair and tell me, what do you see? Bigger than most cats, short fur, wide face, and an expression that seems to be a sign of imminent danger:

Hey, you! Stay away from me.

This is where your sense of sight might lead you astray. You may perceive them as being mean and snobbish. As it happens, the British Shorthair cats aren’t snobbish at all. They are simply not interested. But don’t confuse this disinterest with them being mean. Truth be told, these cats are pretty friendly, but they make you work for it. Think of them as a friend who cares about you but doesn’t like to show it. We all know someone like that, don’t we?

Laid back, low maintenance, not a care in the world, and perfectly happy to stay in the same position all day every day. This is a British Shorthair for you. One reason as to why they are so laid back has to do with their build. These cats are bigger than most other cats out there and thus are weighty. Due to this reason, British Shorthair cats aren’t lap cats, which may make some people, wrongly, think that they aren’t friendly. This cannot be further from the truth. British Shorthair cats have their own unique way of confessing their love for you.

This is quite obvious, isn’t it? At the end of the day, British shorthair cats are domestic cats. And all domestic cats like to purr under the gentle touch of their owner. The Shorthair isn’t any different from the rest of the cat-clan.

A thing that has to be mentioned here:

Don’t try to pick up a British Shorthair.

These cats hate getting picked up, and well, they will resist it. To them, a couch is always preferable to a lap. This is exactly why you, almost always, see a shorthair taking a nap on a couch and not in a lap. I wish I had a life like that.

British Shorthairs are friendly to other pets, but there are caveats

Cats are hunters. In the wild, cats lead gritty lives and kill their prey to survive. This is hardwired in their nature. To survive every cat establishes an area and marks it as its own territory. This enables them to not only hunt without worrying about other cats meddling in their affairs, but also makes them seem dominant in their social hierarchy.

So why am I telling you about wild cats when we are talking about British shorthairs?

British shorthairs might be domesticated, but it is in their nature to establish boundaries. And their nature makes them defensive against intruders in their space. These intruders can be your dog or a new cat that you have been meaning to introduce.

And this is why you, more often than not, see a feud between two domestic cats. They are both fighting for dominance. Keeping this in mind, introducing new pets to your British shorthair should be done very carefully and in a controlled environment.

Don’t ever introduce a cat, let alone a dog, out of nowhere. This will make your shorthair freak out. Your cat will become defensive and in doing so will, quite naturally, become aggressive.

Always introduce new pets gradually over the course of days. Take your cat near other pets quite frequently to introduce it to them. Host your friend’s pet for a day to let your cat know what’s it like. With time you will notice your shorthair accepting its new friends and they will get along really well.

Every cat has a different personality, so it might take your cat a bit longer or a bit lesser to adjust to its new acquaintances. Don’t be in a hurry. Give your cat as much time as it needs.

How does a Shorthair show affection 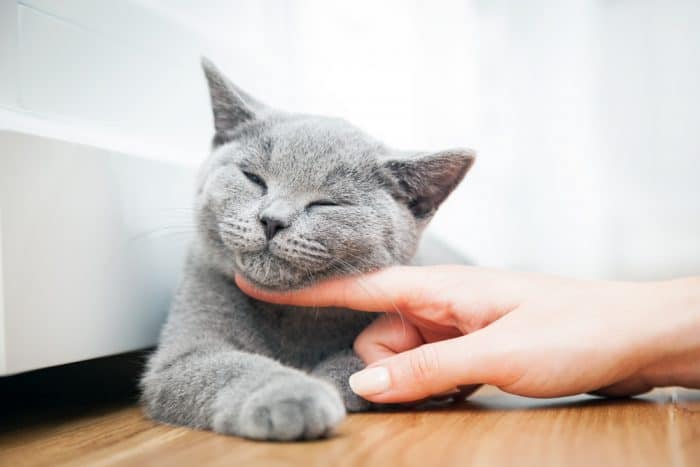 Like I have mentioned before, British shorthair aren’t lap cats. And they only like petting when they are in the mood for it. So how can you spot your cat being affectionate to you? Simple! Pay more attention.

If you find your cat following you around the house, pay attention. It is the shorthair’s way of telling you:

Hey! I adore you.

Just think, a cat so laid back the couch might be its best friend, following you around. If this isn’t affection, I don’t know what is.

Another situation where you might spot your cat’s love for you is when you aren’t your regular self. You might be sick, or you might be feeling down. Whatever the case may be, your shorthair senses it and is, undoubtedly, looking out and hoping for you to get back on your feet. Just look at it standing by your bed waiting for you to massage its coat.

These are but two situations where your shorthair is displaying its own kind of love; there are countless other situations; you just have to look.

Do British shorthairs need a pal to stay happy?

One is always better than two, right? It is also true in the case of British Shorthair cats.

A British shorthair doesn’t need a pal to stay happy. It can chill on its own pretty fine. After all, these are British cats. But two cats are a pretty good idea for a number of reasons.

The first reason you need a pal for your Shorthair is the level of exercise your cat would get playing with a pal. It is quite a stimulus for cats to see other cats jumping around. This makes them want to get up and stretch.  Exercising is not only helpful for your cat’s well being, but it is also a prime factor when it comes to its overall happiness.

The second reason as to why it is a good idea to get a companion for your shorthair has to do with you. There are times when you have to leave your cat at home. In such situations, you might get a cat sitter or a friend to look after your furry friend. But you know what is more economical and better? Making sure that your cat has access to fresh water and food and a friend to play with.

Can I let my British Shorthair outside?

It is perfectly fine to let your British shorthair play outside, but you have to take some precautions if you choose to do so. First and foremost, you need to make sure that your neighborhood isn’t filled with stray dogs and cats. If it is, then it is better to keep your cat inside as British shorthair cats aren’t too fond of running or climbing.

British shorthair cats aren’t cuddly. They will sit near, follow you around the house but they won’t jump in your lap. This doesn’t mean they don’t like attention. They like attention but not too much of it. So petting is fine and is much appreciated, but cuddling is big No.

British shorthair cats make excellent pets. These cats are not as active as other pets and certainly not as cuddly, but these are ideal pets as they are undemanding and quite laid back. So you’ll never have to worry about them getting bored or being unhappy in general.

British Shorthair cats may have short hair, but they have a pretty dense undercoat. This undercoat is the primary reason why these cats shed a lot. So to keep things manageable, it advised that you brush your cat twice a week. Brushing not only keeps your cat’s fur in check, but it also makes your cat happy.

Compared to other domesticated cats, British shorthair cats are some of the healthiest cats around. Aside from a few hereditary diseases, they aren’t prone to many problems.