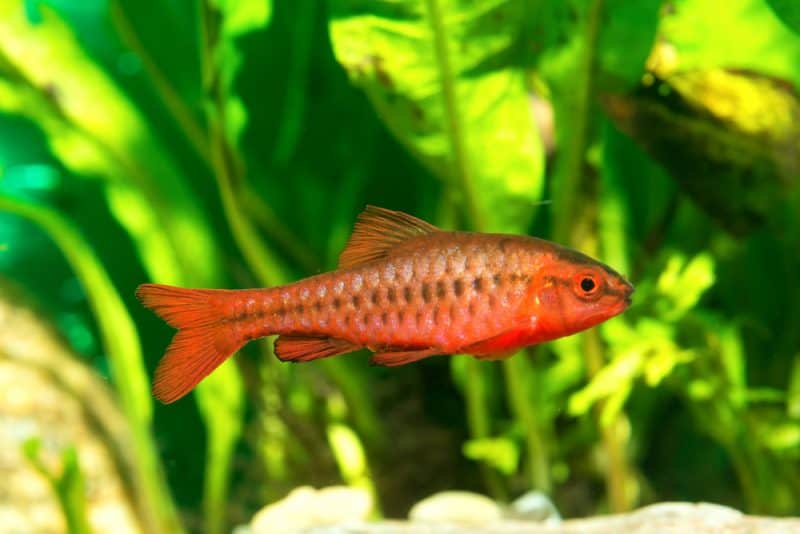 Cherry barb also known as Puntius titteya are beautifully colored small fish and are one of the most popular barb species.

Are cherry barbs aggressive or peaceful fish? Cherry Barbs are very peaceful and should be kept in schools of 6 or more. They are known to be rather shy so you should keep them in a school so that they can feel much more comfortable.

In this article, we will uncover all that there is to know about the temperament and social behavior of cherry barbs.

Contrary to popular belief this, specific species of Barb Fish is very peaceful. They stay away from long-finned fish.

Cherry Barbs are an ideal fish for community tanks but it’s better to keep them in a tank full of small fish. Helpless and small Cherry Barb’s easily become prey for any predator fish. They do great with Tetra fish.

Angelfish are very big in contrast to the Cherry Barb which is why Cherry Barbs would never attack it. However, being larger in size than Cherry Barb’s, Angelfish would probably harass the former a lot.

Cherry Barb’s also are not too fussy when it comes to living with shrimps, especially cherry shrimps.

The most common fish that you find in community tanks are Cherry Barbs. They have serene temperaments and normally do great with other kinds of calm and tame fish including their own species.

You should never keep a Cherry Barb alone:

Always keep them in groups of 6 or more.

You should remember to always quarantine these fish before you place them in a community tank. They are extremely vulnerable to a parasitic disease called velvet so quarantining your fish can help you avoid this velvet disease, otherwise known as the coral fish disease.

Breeding is a time when a lot of fish species, specifically the males, can become quite aggressive.

A well-conditioned Cherry Barb pair should be placed in a separate tank for breeding. The tank should be filled with soft water as well as a number of fine leaved pants such as Cabomba.

The male fertilizes the eggs as the female lays them onto the fine leaved plants.

The female is known to deposit over 200 eggs in under an hour. It is advised to have java moss on the substrate so that they can catch the eggs that fall off the fine leaved plants. The parent fish should be taken out of the tank as soon as the spawning is over as they might devour the eggs.

The eggs will hatch after 24 to 48 hours and after another 2 days, they will swim freely. The Cherry Barb babies will continue to grow for about two months until they reach the adult size. At this point, it is fine to add them to the main tank.

The best thing to do is to put the females in a separate tank until the males cool down and become less aggressive.

It is also important to note that a lot of fish species including Cherry Barbs can exhibit aggression if the ratio of males to females is not correct.

In an ideal scenario, the ratio of males to females should be 1:2 or 1:3. This ensures that the females are not harassed too much by the males for mating purposes. It also decreases territorial behavior among the males.

There are some things that any Cherry Barb owner should know before placing Cherry Barbs together. These fish should definitely be kept in a group as they are highly social and they need the group to be active in the water body.

If you only keep a few of the Cherry Barbs, then you will soon notice that they get aggressive with each other. Staying in large groups actually helps to spread the aggression and fights break out less often.

Other facts about Cherry Barbs

Here are some interesting facts about Cherry Barbs that would make you want to buy these little guys as soon as you can.

They grow to about 2 inches and are meek schooling fish. The males are generally red while the females have a lightly darker and a much duller color. To a naked eye, it looks brown or tan-ish.

Female Cherry barbs are sturdier and somewhat rounder as compared to the male Cherry Fish.

You can easily tell the genders apart by keeping the above differences in mind.

This kind of fish thrive:

In water temperatures that are in between the range of 72 to 78 degrees Fahrenheit.

Cheery Barbs require a lot of space to move around as well as a lot of hiding spots. They also love thick plants as vegetation relaxes them.

Pebbles are also a wonderful addition especially when they are darkly colored. They make great additions to any fish tank plus they make the fish feel relaxed and safe. This kind of barbs spend most of their time at the bottom of the aquarium, unlike other varieties of barbs.

Bright lighting makes the barbs anti-social hence dim lighting is preferred. The best aquariums for barbs are the ones that can hold at least 30 gallons of water, as this provides ample space for the little fish to swim around.

In the wild Cherry barbs consume an array of different sustenance such as bugs, worms, crustaceans as well as algae. These kind of fish are omnivorous. Cherry Barbs are not very picky when it comes to food and rarely leave any leftovers. They enjoy eating fish flakes as well as frozen and live items in captivity.

They also love to munch on various vegetables such as dices seedless zucchini.

When planning the diet for your Cherry Barb:

Always remember to consult a professional to be on the safe side.

Having an enriched diet is very important for the health of the fish and the owner should make sure that the fish are getting all the minerals they need to stay happy and well.

When the Cherry Barbs are young:

It is quite hard to tell the difference between males and females.

As soon as the fish mature, the differences become much more prominent. The female Cherry Barb has a rounder and much fatter abdomen as compared to the male Cherry Barb. Also, the males are a bit more aggressive than the females, their so-called fights are a demonstration of their bright colors.

Are Cherry Barb’s good beginner fish? Cherry Barbs are excellent beginner fish. They will not pick up any diseases as long as you provide them with the best possible water conditions. These species of fish are very hardy and it’s unlikely that you would have to deal with an ill Cherry Barb.

Which is the most common disease among Cherry Barbs? The most common disease among Cherry Barb’s is the Ich. In this condition, the fish develop small white spots all over their body that look like salt grains. You might notice your fish scratching their body against the surface in order to get some relief. Fish actually get Ich when their immune system is not strong due to improper tank conditions. This causes them stress which ultimately leads to the Ich.