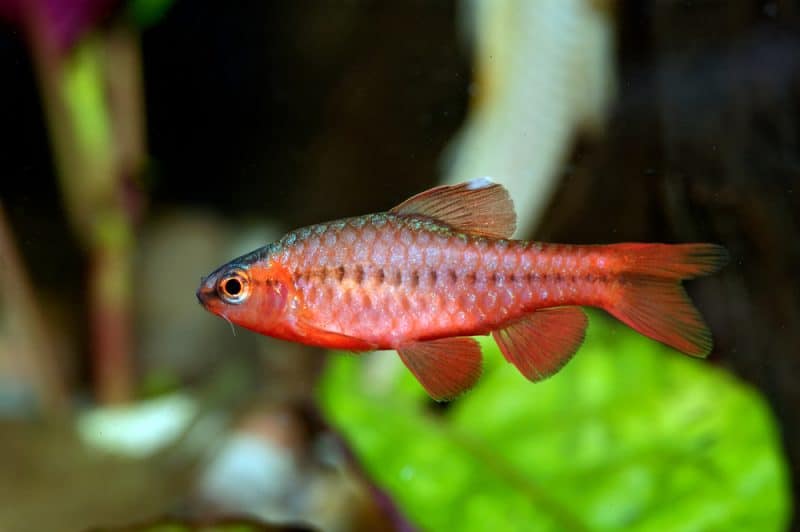 A major decision you need to make when you have an aquarium is the kind of fish to put together. Some fish species are known to be aggressive and they cause harm to other fish species around them. If you have a fish pet with an aggressive personality, you might be wondering if it is okay to put it in a fish tank with others.

Are Cherry barbs good with bettas? Yes, Cherry Barbs can live peacefully with Bettas. You will need to raise them together under ideal conditions. You should consider the temperature, the size of the tank, the gender of the bettas, and even the color of the Cherry Barbs in some cases.

Many people have managed Cherry Barbs and Bettas together and they have always made a beautiful pair. However, these people have followed certain rules to make it work. If the conditions are not right, you will not be able to keep them together for long. In the next couple of points, I will explore all the rules you should follow to keep your Cherry Barbs and Bettas together without issues.

Cherry Barbs are Calm When They are Kept in Large Numbers

Cherry Barbs are schooling species, and they need to be in large numbers to be comfortable. You should have at least five of them if you want to keep them calm. They love to fight and fight amongst themselves, but that is as far as they can go.

If Cherry Barbs have enough of their kind to shoal with, they remain peaceful and calm. This means that if you have enough Cherry Barbs, you can keep them with Bettas. However, you need to study the personality of the Betta as well.

Most Bettas are calm when they are seldom disturbed. That is why it is important that the Cherry Barbs are comfortable among themselves and have no time disturbing the Bettas. However, there are Bettas who are extremely aggressive and may think that another fish in their territory is a threat and try scaring them off.

You may keep the Bettas away for some time and get to know their personality before putting them together with Cherry Barbs. If you realize that they are not extremely aggressive, they will do well with the Cherry Barbs.

How Can I Check if the Bettas are Aggressive?

I am sure you are wondering:

“How can I check if the Bettas are aggressive”? There are three common ways to check.

The first thing to do is to make the Betta see itself. You can put a mirror in front of them for this purpose. Under normal circumstances, it will try to attack the image in the mirror.

The point is not to see if it is trying to attack the image but how violently it does. If it is too violent, you will need to reconsider the decision of adding the bettas to the Cherry Barbs. Another thing to do is to release the Bettas into a larger environment, probably a larger tank and see how it behaves.

Another thing is to place the Betta’s tank in a way that it can see other fish. If you have another fish tank, place it close to a clear Bettas fish tank and see what happens. If it tries to swim close to the other tank in a calm way, it is a way of indicating that it is “accepting” the other fish.

Both fish will be comfortable if the temperature of the water is right for them. Fortunately, both of them can thrive in tap water. You will need to treat the tap water to make it a little more acidic for the Cherry Barbs. The water pH should be between 6.0 and 7.0.

You may have this question on your mind:

“What do I do since they have different temperature ranges.”

Since you can establish a common ideal temperature range for the two, use that. This means that you should have a thermometer for your water tank and make sure the fishes are always comfortable in the water with a temperature that they both can live in.

Since Cherry Barbs are better kept in a group of at least five, they need to be in a big tank to be comfortable. You should consider a tank for at least 20 gallons. In the same way, Bettas also need more swimming space. Hence, the bigger the better.

If you are wondering: “how big is big enough?”

Just make sure that the tank is not crowded. If they need to fight for swimming space, they may become aggressive. Remember to put a lot of plants into the tank since Cherry Barbs love shades and caves. They sometimes love to hide among the plants.

It is widely known that Bettas attack fish with showy colors. A classic example is guppies. Guppies come in varying colors including blue, yellow, violet, red, green, white, and even orange. Male Cherry Barbs are generally red while their females are pale in color.

Your next question will probably be this:

“Do I need to worry about this?”

Although Bettas rarely attack Cherry Barbs based on their color, you should watch out for this as well and isolate both species if such violence occurs.

Are Cherry Barbs Fin Nippers? Cherry Barbs are generally not fin nippers. They are peaceful but they can nip under the following circumstances:

Are Bettas Schooling Fish Like Cherry Barbs? Bettas are not schooling fish. Hence, they fight each other when several of them are together. They prefer to stay and swim alone. Irrespective of the gender of the Bettas, they still prefer to live alone and do not intermingle much with other fish.

What are Some Interesting Facts About Bettas? Some details about Bettas that will intrigue you include:

What are Some Interesting Facts About Cherry Barbs?

There are also details about Cherry Barbs that will interest you: