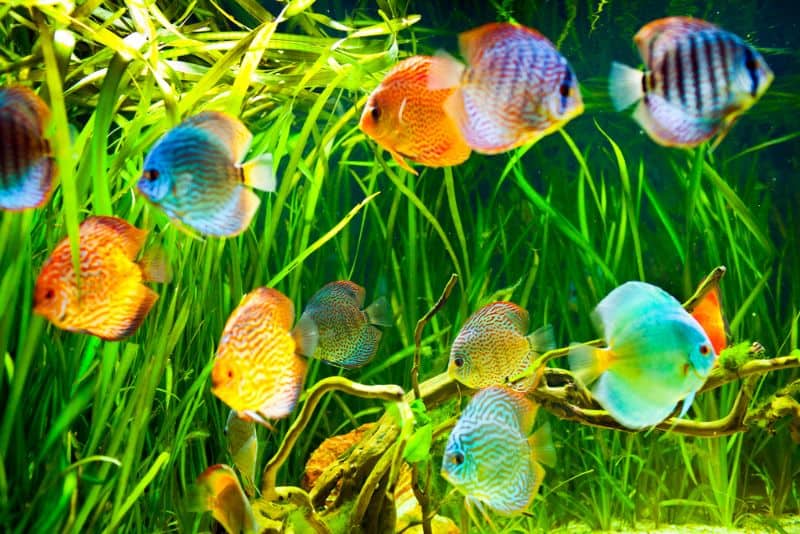 As an aquarist, the most important thing that I want to know before buying a new fish is its behavior. If you’re new with discus fish, you’ll want to know how they’ll behave in your tank.

Are discus fish aggressive? No, they are actually very calm and peaceful. However, they do need a group of familiar discus fish around them. If they don’t bond with their tank mates, discus fish could possibly die. Also, malnutrition and breeding are two scenarios in which they’ll become aggressive and highly competitive.

Let’s find out more about what keeps discus fish happy and what can cause aggression in this wonderful breed.

Aggressive and stressed discus tend to chase other fish. They’ll body-slap or pick on their tank mates. But, if they are already sick due to stress, their bodies would be too tired for all the physical exertion required for such forms of aggression. Instead, a sick discus will hide under a plant until it recovers.

As a discus fish grows, the visible signs of aggression reduce. You’ll now notice different signs of aggression in discus. For example, a couple will bicker on which parent should look after the fry. Similarly, they will peck one another, show bold colors or develop a jaw lock. This happens in pairs when one fish is less mature than the other. It is also possible if the couple doesn’t consider one another fit for breeding. Putting together two fish of the same gender in a breeding box could also lead to such behavior.

The best thing to do is enjoy this as fish nature instead of worrying too much about it. It is only worrisome when the fish start to show signs of sickness.

Discus is a fish species that is very mellow and calm. They like their peace and privacy. It is only in rare cases that they get aggressive. That, too, only happens when an external factor causes disturbance.

First of all, discus usually have a group with which they bond. These could be tank mates from the pet store. If you put together discus fish bought from different stores, they probably won’t bond. There is a possibility that the discus will gradually develop some attraction for each other. However, they can also reject one another.

To prevent such a scenario, make sure you keep 6 to 8 discus fish bought from the same supplier in one tank.

These fish will already be familiar with one another. Hence, they won’t have a hard time adjusting in a new habitat. Possibly, the discus fish would already be living as pairs in their tank at the pet store. Since the pairing would already have been established, there will be little chance of competition in terms of breeding.

If discus fish are kept with other species, they might end up getting bullied. Other fish are usually more aggressive than discus fish. In such a case, discus fish might not be able to feed properly which will lead to malnutrition and stress. Eventually, the discus might die.

From experience, I can tell you that lowering the water temperature and increasing the water pH can lower aggression in discus fish. This should be a temporary adjustment because elongated exposure to new water parameters can worsen the situation for the fish due to stress.

In optimum conditions, discus fish remain as calm as possible. To ensure such a peaceful environment, you must follow the following optimum tank parameters.

Warm, soft, and slightly acidic water is ideal for a tank of discus fish. However, the optimum conditions may vary slightly from one type to another. The best way to figure this out is by asking the fish supplier about the conditions that the discus fish were being kept in at the pet store.

The pH should be maintained between 6.0 and 7.0 whereas 1 to 4 dKH hardness is perfect. The temperature must be kept within the range of 82- and 86-degrees Fahrenheit. You can install an aquarium heater to maintain a constant temperature. The most important thing is consistency. Even the slightest changes in the water will be felt by your discus fish and may lead to aggression.

A proper diet to curb aggression

Your discus fish will need daily care and feeding is a primary part of it. Providing your discus with a proper diet will help curb any stress that they might be feeling and reduce aggression.

You should feed your discus in small portions but regularly. Fully grown discus fish need to be fed 2 to 3 times every day. Feed mature discus fish 4 to 5 times a day for healthy growth. If your discus fish recently bred, the fry will need 10 to 12 meals. At first, the fry feed on mucus released by its parents. After a few weeks, you can start feeding them shrimp and other fry food.

Discus fish prefer live foods. White worms, black worms, and bloodworms are all good options. Brine shrimp, without the salt, can also be fed to discus fish. You will have to keep a balance between the meat and dry foods, though. Fish flakes and fish pellets are easily available dry foods that have a good nutritional value.

If you’re going away, don’t make the mistake of leaving large amounts of food in the tank. This will lead to over-eating which can cause sickness. Fully grown discus fish can survive 2 to 3 weeks without being fed.

Your feeding routine should be such that you give your fish at least 10 minutes to freshen up in the morning before feeding them. Similarly, after the night’s meal, give them 10 minutes to settle before turning off the lights.

Aggression is more likely found in fish that aren’t comfortable with their tank mates. Since discus fish are peaceful, they prefer mellow tank mates. Hyper fish will end up bullying the discus.

Corydoras catfish is also a great option. It has a behavior similar to discus and also prefers the same tank parameters. Other than that, any fish type that isn’t overly active and requires similar tank conditions as that of discus will make a great tank mate.

Often times, aggression in fish can lead to sickness in others or their own selves. A sick discus will seek refuge under a shelter, away from other fish. You’ll have to notice the fish behavior closely to determine if it’s sick.

If the discus has clamped fins and is scratching them, these could be indicating protozoan infection. Imbalanced fish that are having a hard time breathing are usually affected by the nitrite in your tank water. Immediately check the water parameters and take the required action to maintain the optimum range for temperature (82-86 degrees Fahrenheit), pH (6-7), and hardness (1-4 DH). Cloudy eyes also indicate that the water parameters are messed up for your discus.

Bacterial infections affect discus fish very easily. Symptoms of this include a swollen abdomen and protruding eyes. Disappearing tails and fins are also a sign of a bacterial infection. If there are white patches or red spots on the body of the fish, it may be suffering from a skin ulcer.

Look for these signs and research accordingly to find out effective treatments.

Generally, change 10% to 25% of the water on a weekly basis to prevent sickness among the fish.

What temperature should discus be kept in? Discus fish like warm water with gentle currents. 82 to 86℉ or 28 to 31℃ is the perfect temperature range for these fish. Such high temperatures lower the amount of dissolved oxygen in the water. Keep this in mind and make sure to take extra steps to counter this effect like using quality filters.

What is the optimum pH and hardness for discus fish? Wilddiscus and Asian discus like to live in slightly acidic water. The optimum pH is usually 6.4 to 7.0. As for the water hardness, 1 to 4 DH is the recommended range.

Why is discus fish so expensive? Buying a discus is expensive. Not only is the fish priced high, maintaining the tank for them is also costly. The reason why discus fish are sold at such high prices is that they are difficult to care for. The fish owners put in a lot of care to keep the fish healthy. Secondly, breeding discus fish isn’t easy. Pairing them successfully is connected more with luck than anything else and it takes up a lot of time. Therefore, extra money is charged for all that hard work as pet stores sell already-paired discus fish at a higher price.