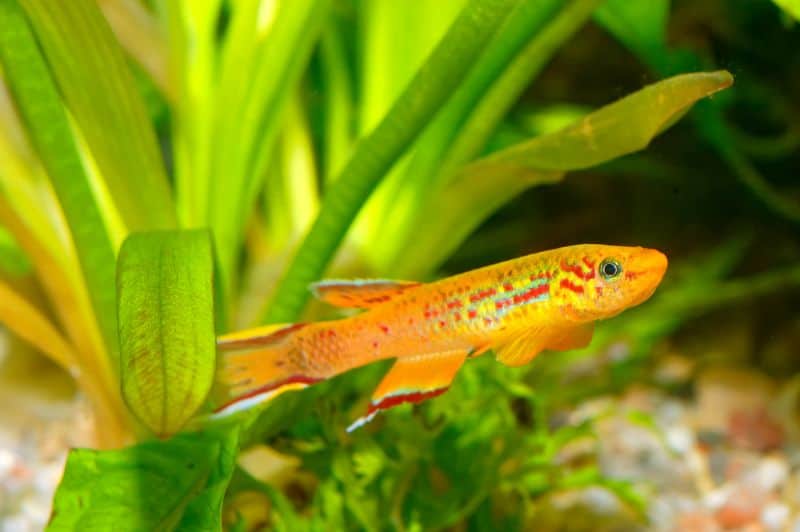 Killifish is one particular group of fish that has a rather complex temperament and can cause trouble if you don’t know your fish’s nature well enough.

So, what kind of temperament does a killifish have? The Killifish is usually a very peaceful fish, but male killifish can exhibit aggression and territorial behavior towards other males in the tank. Killifish are not very good community fish, either.

But the question remains, what do you do if you want more than just one male fish in your tank? And do all species of killifish share the same temper? We will take a look at these questions below.

Even though they are quite small, the killifish is a carnivore that mostly feeds on live food in in its natural habitat. Killifish are usually peaceful creatures, but the male killifish is a completely different story.

It is never a good idea to keep more than one male killifish, especially of the same species, in the same tank. The dominant male will fight most of the time and injure the other weaker males and eventually kill them.

Unless you have a big tank with plenty of space to hide, it is not a good idea to let more than one male killifish in the same tank. Whenever you plan to buy killifish, try buying a pair of male and female fish so you can breed them in the future and avoid any sort of fighting.

Regarding keeping killifish in a community tank, there are only a couple of killifish species that you can keep with other fish. The two particularly well-known species, the Golden Wonder Killifish and the Blue Gularis, are timider and more suitable for keeping in community tanks.

If you want to keep any other species of Killifish, make sure to search a little about their temperament to confirm that you don’t buy an overly aggressive fish.

A couple of fish species that would make good tank mates for most killifish are neon tetras and rummy nose tetras.

Mostly, male killifish show aggression towards each other if they are in a small tank and belong to the same species. Otherwise, they confine to their normal peaceful nature. It is also a good idea to make sure that your killifish will be able to survive in the water parameters of your tank.

Breeding is a time when a lot of fish species show aggression. In order for you to start breeding killifish properly, you must be familiar with what kind of reproductive system your species has.

There are basically two reproductive types:

The annual killifish is the type which originates from rivers that dry up each year. The result of this is that the killifish die while their eggs remain in the soil and hatch when the rain fills up the rivers again. Because their usual lifespan is for a year or two, these fish grow up much faster than normal non-annual killifish.

The method of reproduction for annual killifish in an aquarium is that after the fish lay their eggs in the substrate, the water and the fish are completely removed for some weeks. The damp substrate is left like that and the eggs are allowed to mature over time.

When the eggs are about to hatch, they are placed in an aquarium with water again.

If you have these types of fish, you should begin with placing a substrate to allow the killifish to lay their eggs in. Peat moss is usually a good option for this process. Killifish lay a small number of eggs each day due to which many fish farms do not prefer to breed them. Once they have laid all their eggs, the incubation process starts.

The eggs should then be removed from the substrate and put into fresh peat moss again to start incubation. The peat moss has to be kept warm and moist for the whole incubation period to ensure that the eggs develop properly. Once you can see the developed embryos inside the eggs, you should move them to an aquarium with water to allow the hatching process to start.

Non-annual killifish belong to an environment where the rivers do not dry up and hence, they have a longer life span. Due to this reason, the breeding process of non-annual killifish is the same as that of other egg-laying species of fish. They lay their eggs in the water after which the eggs incubate within it and the fry are born after a few weeks.

When breeding non-annual killifish, you can either choose to keep your tank base covered with plants or keep it clean with only some gravel. Your fish will start laying eggs and as soon as they are done, you can move your adult killifish to another tank. The eggs will incubate for some weeks, after which the fry will hatch.

Non-annual killifish can also be incubated by taking the eggs out of the water and following the same process as with the annual species. However, this process will elongate the incubation process by several weeks.

What tank conditions do killifish prefer?

Knowing what tank conditions killifish require can not only allow you to pair these fish up with those similar to them but can also ensure that your fish live a long and healthy life.

Most killifish are freshwater fish that originate from different continents around the world such as Africa and parts of Europe and America. Because there are such diverse species of killifish available, each one of them has separate requirements. Some fish are used to slightly acidic water with lower temperatures while others prefer alkaline water with warmer water. Thus, it is always a good idea to research a little about the requirements of the particular species you are planning to buy.

There are still certain parameters that suit most species of killifish. These fish are used to a water temperature of 72 to 80 degrees Fahrenheit. However, some species that originate from hotter areas prefer temperatures even higher than that.

As for the water pH and hardness, killifish require slightly acidic water of a pH around 6.0 to 7.0. Water hardness, on the other hand, should be set at around 120ppm to 160ppm depending on your species of killifish.

Killifish can also easily be placed in small tanks. A capacity of 20 gallons is perfect for keeping a pair of killifish. Make sure that you add some live plants along with a substrate depending on whether you want to breed your killifish or not. If you do, peat moss or artificial mop are great options to allow your killifish to breed and lay their eggs.

Most killifish prefer slightly dim lighting, so plan your lighting arrangements in advance accordingly. Along with this, make sure that the lid of your tank is covered at all times because killifish are incredible jumpers.

Killifish are well-known for their beautiful appearance and are an amazing addition to any tank. Every species has a different pattern and color according to the areas they originate from. But one thing they all have in common is that the male is significantly brighter than the female killifish.

Most species of killifish vary from 1 to 4 inches in size, however, some smaller species can grow lesser than an inch. An important query most beginner aquarists have is how to differentiate between male and female fish.

Are killifish sensitive or hardy fish? Most species of killifish are hardy and can survive different water conditions.

How long do killifish live? Most killifish have a life span of 2-5 years in normal tank conditions but the annual killifish might just survive for a year.

What food does killifish eat? Killifish mostly prefer live and frozen food such as bloodworms, brine shrimp and mosquito larvae to name a few. Most killifish would not be up for eating flakes or other processed fish food.