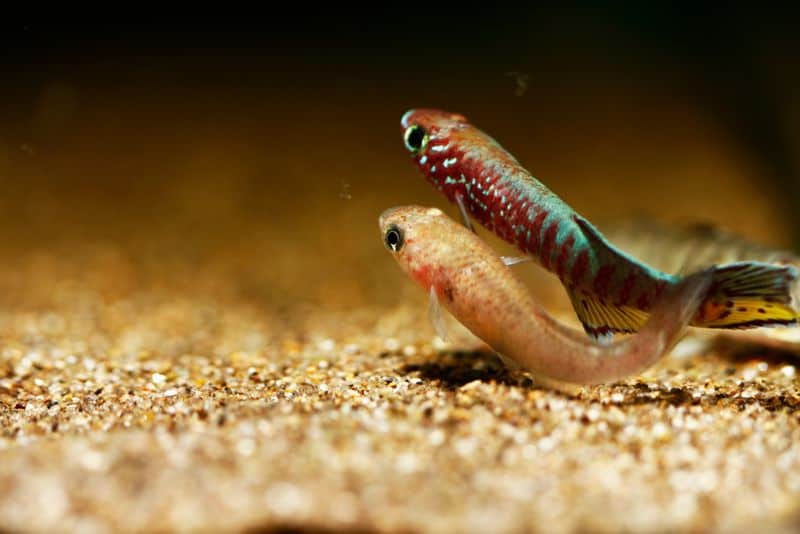 ‘Small Fish-More care’ that’s probably your idea of keeping a fish like killie. Well, considering the highly flexible nature of the killifish, that is not at all true!

Are killifish hardy? Yes! Majority of the aquarium bred varieties of Killifish are extremely hardy and adaptable. They are capable of adjusting to a variety of water conditions. Therefore, these brilliantly coloured, small fish, are easy to care for and breed.

Although, no matter how little care a Killifish may demand, one must learn about its basic needs and preferences to provide it with a happy & healthy life.

A killifish is probably one of its own kind when it comes to accommodation. These fish can be kept in small aquariums as well as in the larger ones. The tank size you choose for your killies depends on their size and quantity.

So, here we have summarized, the preferable water conditions for all sorts of Killifish:

Ideal water temperatures for killifish varies from species to species but mainly ranges from 72-75 °F. Conventional aquarium heaters may be used to raise the temperature. If you are a serious killie-keeper and have many tanks in the same room, then the best option that you have is to heat the whole room. This means, there will be no need for installing heaters.

The pH levels preferred by the killies range from 6.0-7.0 and the total hardness of water should be between 120 ppm and 160 ppm.
The tank should be filtered with a small sponge filter with a gentle air flow. Killies prefer a well-planted tank with low lights.

Killifish are vibrantly coloured and beautifully patterned freshwater fish.
They belong to a large family of fish, that consists of 1250 species which are further divided into ten groups. The different species of killifhs are mostly known by their scientific namesas it helps to keep track of their ancestral lineage and identity.

Some common Aquarium Varieties of Killifish are:

Killifish are further divided into Annual and Non-Annual killifish. The annual killifish live in temporary water bodies that dry up every year and thus, have a short lifespan in the wild (3 weeks-9 months). These fish can survive up to 2 years in an aquarium.

Because of their short lifespan, annual killies have a rapid growth and early sexual maturation.

Non-annual Killifish live in permanent bodies of water and tend to have a larger lifespan. (3 months-5 years).

Some species of killifish like Aphyosemion, Epiplatys, and Procatopus are considered to be “Semi annuals”. Their eggs can survive long periods above the water. The parent killifish attach them to plants and rocks near the water surface and they hatch when the circumstances are suitable. The average size of Killifish ranges from 2 inches to about 6 inches.

Generally, most species of killifish have a peaceful temperament. They thrive well in community tanks consisting of small, peaceful species that require similar water conditions. Examples of these compatible fish are:

However, larger fish like Angel fish and Gold wonder Killifish might perceive their little mates as snacks. Therefore, conduct thorough research before adding a larger fish to a community tank that consists of killies.

Also, the killies are excellent jumpers. Therefore, you should keep your fish-tank covered at all times. The tank should be properly covered by the hood as the small-sized killies can even jump through small gaps.

Killifish are carnivorous and prefer live foods over frozen and dried foods. Some of their favourite foods include crickets, worms, Insect larvae, crustaceans etc. Mature Killifish can be fed with:

Although these live foods can be bought from stores, but one can collect them from fish ponds as well. Daphnia and Tubifex worms are easily available in fish ponds. Mosquito larvae can be cultured at home as well but bear in mind that it is illegal in many countries so you might want to research a bit on the subject of culturing mosquito larvae. Just make sure the larvae do not complete the full cycle and turn into mosquitos.

Also, remove the food that is not consumed by the killie as soon as possible. It may lead to spread of several diseases, otherwise.

Suitable foods for the newly-hatched Killifish fry include microworms, newly-hatched brine shrimp, vinegar eels, infusoria and grindal worms. Microworms can be easily cultured by placing baby cereal in a suitable plastic container. Then water and dry yeast should be added to it. This will give you a paste. After a few days, you will be able to see microworms crawling on the sides of the container.

They can be scraped out with a small stick or any other suitable tool and can be fed directly to the fry. Vinegar eels and grindal worms can also be manufactured with a similar technique.

However, providing with a varied and balanced diet is extremely necessary to raise a happy and healthy Killifish. Therefore, exclusive use of a single food should be avoided. Dry foods like fish flakes should also be mixed with live foods. This will ensure that your killies receive all the essential nutrients for a healthy body.

“Egg-laying tooth carps” is another name for the brilliantly coloured killies. They are closely related to the live-bearing tooth carps (like platies and mollies) but have very different methods of reproduction. They are really easy to breed. Perhaps, this is the prime reason of their popularity amongst killi-keepers.

They lay eggs and can be divided in to:

The top spawners prefer a to lay their eggs in the dark. You can provide them with a dark bottom of the tank spreading a half-inch layer of peat moss. This should be boiled before-hand.

The bottom spawners, must be given an illusion that they are burying their eggs by providing them with a layer of peat moss which is at least 1 inch thick. Some kinds of killifish alternate between top and bottom spawning.

For successful breeding of Killifish a small breeding tank, having a water capacity of 2.5 – 5.5 gallons is most suitable. For annuals and semi-annuals, you can place peat moss, almond or oak leaves at the bottom. The annuals have a great fertility. However, most of their breeding process will be natural and will not require much of your attention and care.
The non-annual fish can be a bit troublesome, though. After they lay their eggs, the parents should be transferred back to the community tank or they might eat their own offspring. Their eggs hatch within 10-20 days. To speed up the process, they can be placed in a moist area or you can turn off  the aeration. This will lead to lack of oxygen in the tank, which in turn triggers the hatching of killie eggs.

Are killifish carnivores? The majority of Killifish are carnivorous, some are omnivorous (such as Rivulus and Fundulus) and only a very few are herbivores such as the pupfish. The Pupfish are ray-finned killies with striking colours. They are considered as vegetarian killies as they mainly feed on plants and algae in their natural habitat. They are usually found in isolated aquatic habitat and are an endangered species who are not usually found in aquariums. They are also highly adaptable and under severe conditions, they can also feed on insects and aquatic invertebrates.

Why is my killifish not eating? A killifish may refuse to eat if it is sick or stressed. Stress can be caused by bullying or inappropriate water conditions. Stress makes a fish susceptible to numerous diseases like Ich and Velvet which further reduce its appetite. In case of Velvet, numerous white spots will appear all over the fish’s body. Such diseases should be treated with appropriate medicines immediately. Apart from that, killifish may refuse to eat if you do not provide it with suitable foods. Usually, killifish prefer eating live foods but they must be supplemented with dry and frozen foods as well to fulfil their nutritional needs.

Are killifish schooling fish? No, killifish are not schooling fish. They can be kept in small groups but they do not exhibit schooling behaviour. Also, the tank mates for a killifish, should be chosen carefully. They may eat smaller fish like guppies or smaller killies. They may even get eaten by larger fish. Inappropriate company can also build up stress over fish, therefore tank mates should be chosen with caution.