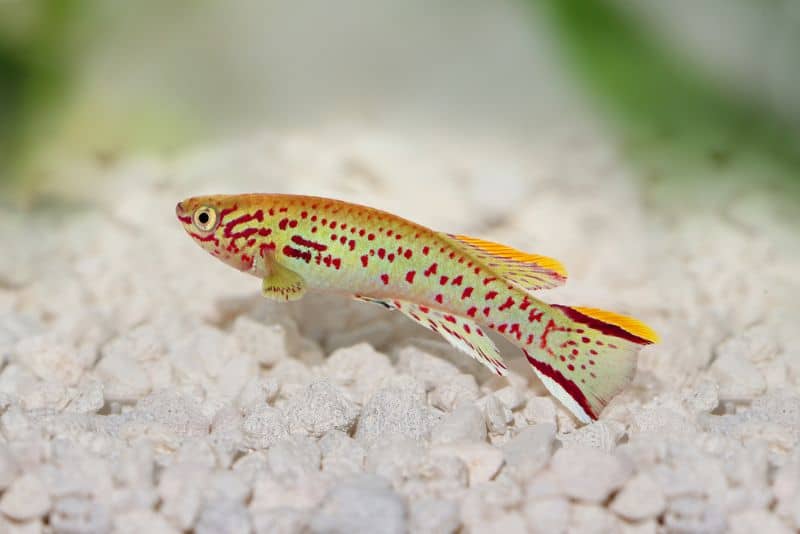 Fish are social creatures that either choose to swim in a school or stick alone. Thus, knowing whether your fish prefer company or not will help you create the perfect environment for your fish.

But what exactly drives this behavior in these fish, and what about their preference for other tank mates? Let’s discuss these things below.

Are Killifish Schooling or Solo Fish?

Naturally, killifish fish are not schooling fish and do not show any type of schooling behavior. However, it is always a good idea to start off with a pair. Similarly, it is your choice whether to keep these fish in a group or not. Killifish will be comfortable with both options assuming you have a large tank.

Killifish are mostly peaceful and timid fish. Even though they are carnivores, they do not usually show aggression towards other tank mates and are good community fish under certain conditions.

Though male killies will sometimes become territorial and start to defend their space. If you put two males in a small tank of the same species, the dominant male will most likely try to drive off the other male fish. This will likely result in injuries or even death for the weaker male.

Females, on the other hand, are particularly timid and do not exhibit any sort of aggressive behavior towards other fish. Even though they are not as bright and colorful as male fish, they will behave well with others. Another benefit of having females is that they yield more fish through reproduction, which is usually why most people buy killifish in the first place.

Killifish Compatibility with Other Fish

Due to their calm nature, these fish can easily be placed with fish of the same size and water preference. Yet, there are some things you must ensure before you mix killies with other fish.

Firstly, make sure that the other tank mates are not too big. As most species of killifish are tiny, they will have a hard time defending themselves from aggressive fish that are bigger than them. Hence, it is important to place them with other timid fish so there is no bullying or aggressive behavior.

Other than this, it is essential that all of your fish prefer similar water conditions. So killifish being mostly freshwater fish, are comfortable with other freshwater fish with similar temperament and sizes.

Some of the best species of killifish that do great in community tanks include:

Moreover, perfect tank mates for killifish include different species of tetras such as rummy nose tetras, cardinal tetras, and neon tetras to name a few. A mix of these fish will do quite well in a community environment.

Knowing what water conditions killifish demand can help you in more than one way. Not only will this allow you to place them with more compatible fish, but will guarantee that your killifish live a healthier life.

As killifish originate not from one, but almost all continents of the world except Australia and Antarctica, different species have different water requirements. Some come from more acidic and warmer waters while others from slightly alkaline and colder ones.

However, one great advantage of having these fish is that they are quite hardy. Most species of killifish will adjust to water conditions that are different than what they require without much effort.

There are still some universal water parameters that suit most species of killifish. The most basic parameters which include water temperature, pH and hardness are slightly more important and should be matched as closely as possible. They are the following:

These parameters are what most species of killifish demand, however, we still recommend you to do some research about the particular species you plan to buy. This will give you a better idea about the perfect environment for your fish. The more you adhere to its specific requirements, the happier your fish will be.

Apart from all these, the basic check on ammonia, nitrite, and nitrate levels along with regular water change will make sure that your tank stays in pristine condition and your fish are always healthy and happy.

There is no doubt that killifish are some of the brightest and most colorful fish on the planet. However, appearance pertains not only to the patterns and shades of the fish but to their overall shape as well.

Killifish are small fish, with most of them being between 1 to 4 inches in size. There still are certain smaller species that are just under one inch as well. Most species of killifish are slim in shape because of which they are able to swim easily in rivers.

There are two types of killifish; annual and non-annual. Annual fish belong to rivers that dry up each year, killing the fish in the process. Hence, their normal lifespan in their natural habitat is only one year. In a tank, these fish can live for 2 years at most, however, the fry of annual killies do reach sexual maturity much faster.

Non-annual fish, on the other hand, belong to normal rivers that do not dry up. Therefore they outlive annual killifish by 3 to 4 years. So in a tank, non-annual fish can live up to around 5 years of age.

Should you keep killifish in pairs or groups? You can keep them both in a pair or a group. A pair of killifish can be great for starters as they can breed, too. If you are going for a group, a ratio of 2 females for every male should be maintained.

What do killifish eat? Being carnivores, killifish prefer live and frozen foods as their main diet. Foods such as brine shrimp, mosquito larvae and bloodworms are great foods for killies and should be a major part of their diet. Some species of killifish are also known for eating algae.

Killifish are particularly known for rejecting flakes and processed foods, even though some people find it hard to get their fish to eat them. Thus, it is recommended to feed them live and frozen food only.

What is the best tank for killifish? A 15-20 gallon tank is perfect for a single pair of killies. Similarly, a larger tank would be needed to place more fish.

Killies prefer dim lighting along with live plants in a tank. Moreover, you can choose to add gravel or any other substrate like peat moss (in case you want to breed your fish) or keep the tank bare-bottomed. This will help you in collecting the eggs when you want to incubate them.

Other than that, it is up to you to add whatever decorations you prefer. These decorations will give your killies a place to hide.