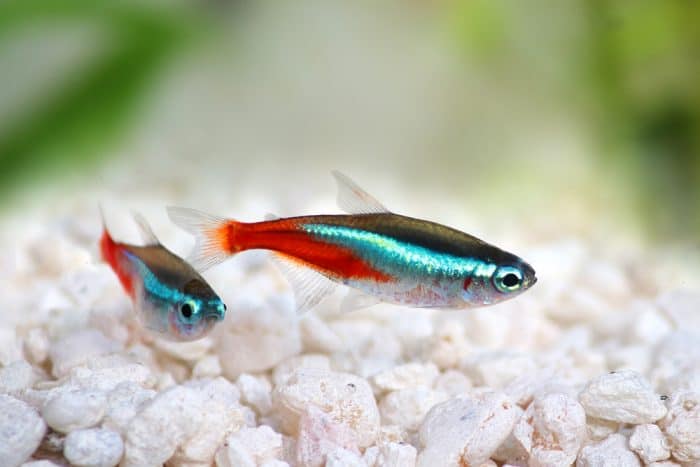 Are Neon Tetras fin nippers? The answer is certainly, YES! Even though they are delicate creatures, they are fond of chasing each other. They also chase different fishes that are in the same tank. In other words, they are playful. Wouldn’t that make them interesting to watch?

Nipping at other fish’s fins seems to be a very normal and instinctual thing for neon tetras…Let’s know why!

Neon tetras are best kept at schools. So if you plan to get a neon tetra, you really should bring along about 15 neon tetras as well and you might as well add some little fish that could live in the same water conditions and are small in size too. However, do not bring a neon tetra in a tank filled with fish from different types. When this happens, you will notice that your neon tetra is nipping at other fish’s fins and chases them. Neon tetras prefer being kept in their school of fish. And by the way, by bringing them in their school, they will nip at each other and avoid nipping at other fishes’ nips. Neon tetras are curious creatures who always suspect new tank mates that belong to a different school. So basically, nipping is just a means of getting themselves introduced to other fishes and it might also be a means of protection. Some people wonder if nipping happens because the fish are hungry. But actually nipping has nothing to with hunger; whereas, fish use nipping as a means of expression. It could indicate territories, desire for matting or just simply bullying other fish. There are many different interpretations for fin nipping. Do not worry if you see the neon tetras’ fins ruined because they heal quickly. Furthermore, a tank crowded with fish increases the risk of the fish nipping each other’s fins. The less the crowd is, the better. A school of maximum 8 neon tetras would be enough. But anyway, nipping will always be there as a natural response of fish. Glow tetras are usually more nippers than other tetras. Neon fish do not have to belong to the same species and that is why maybe they are aggressive against each other.

What is the best tank to keep neon tetras in with a low risk of nipping?

Nipping is always going to be there because this is something innate for the fish. But anyway we could try to decrease the chance of fish nipping at each other’s fins. This would happen when we put into consideration the best tank size and the best number of fish that will be sharing the tank as well the water’s conditions. A 10 gallons tank seems to be not enough for 4 neon tetras sharing the same tank with guppies. They will likely nip at each other’s fins. So, a 30 gallons tank would be an excellent solution to decrease the chance of nipping.  Some people believe that neon tetras are not actually fin nippers but if they feel threatened they will start doing this as an act of defense.

What could fin nipping lead to? Is it serious?

Unfortunately, fin nipping could lead to killing the fist at some point if it reaches an extreme. This is because the fish will be stressed. It is important to know that fish have been tested and declared that they have feelings and they can feel pain. So it fin nipping would hurt them. It is similar to attacking and harassment so yes the repercussions are not so good. So maybe it would be way better to separate the fin nippers from the peaceful little fish that are defenseless. Usually one fish would feel dominant and bully the other smaller fishes. So the best solution is to bring a bigger tank.

Of course animals are instinctual creatures and aggression is a behavior that develops according to their surroundings. Tough environments and shortage of food would certainly make them aggressive. Fish are aggressive especially during their feeding time, mating time,  or during protecting their territories too. Even though some fish could look peaceful and very colorful, they might be aggressive every now and then if they face problems with the tank size or the water’s unexpected changes. When fish become aggressive, they attack each other by nipping at each other’s fins over food or territories. Aggressive fish are usually predators that eat other fish alive; however, not every aggressive fish must be a predator. Moreover, some fresh water fish become aggressive when they grow old. Aggression is a debatable matter when it comes to different schools of fish.

Is your tank suitable for neon tetras?

These are the requirements to guarantee a suitable atmosphere for neon tetras:

Always remember that neon tetras love to live among other neon tetras. They do not like being kept alone. But do not fill your tank with hundreds of fishes because this will cause the fishes to become more aggressive and nip each other’s fins.

What is neon tetras’ typical behavior? They are peaceful, non-aggressive and sociable fishes that love to swim in groups.  They usually swim in the column of water right in the middle.

Why is neon tetra confused with cardinal tetra? Both types are confused because of the red horizontal line which they both have. But the cardinal tetra has the red color on all of its body.