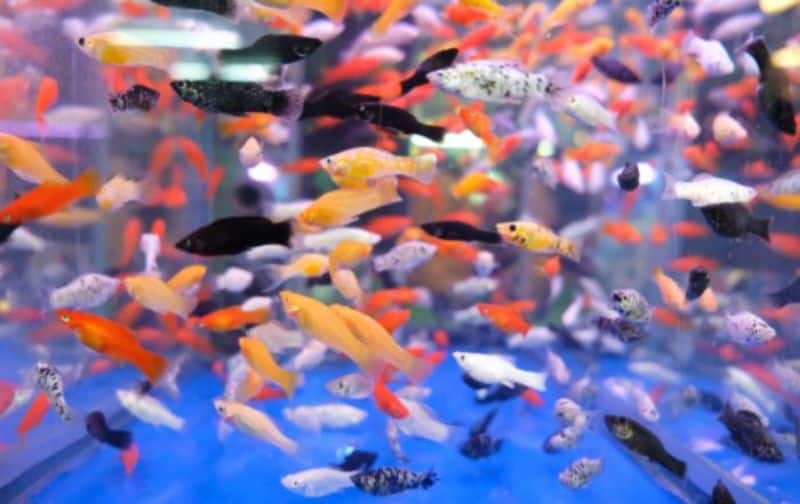 Have you been thinking of keeping platies in the tank and are worried about how many you need to be able to school them and keep them out of stress?

Well, read on to find that out.

So, are platies schooling fish? They Somewhat are schooling fish but don’t form a tight group. They would certainly be happy to have 3-6 of their kind especially if they are the same size.

To understand more about what schooling is and whether platies exhibit this phenomenon or not, I would advise you to proceed to the sub-headings below.

Schooling is taken as a defensive mechanism for the fish where they stay together to protect each other from predators around them.

All those huge groups of fish that we see swimming around in huge flocks (known as shoals) are the ones that prefer schooling.

While in the real world, you would require more than a few hundred fish together swimming in the same direction to be able to say that they are schooling; this is not possible when you have them in a tank.

Here you have a limitation of space and resources and would prefer a smaller number that you can manage well.

So, if you plan on keeping platies together, here is all that you need to know about the process before you get started.

Fish like Tetras are the ones that have exhibited a major liking for schooling and groupings.

This behavior hasn’t been seen with the platies as such.

They do seem to enjoy company when they have it but you would hardly ever see them swimming around in a coordinated manner.

If you have around 5 to 6 other platies in the tank, a mixed group of males and females that are living together, you might one day see that two of the females are swimming together in one corner and the rest in another.

At times the females become really good friends and don’t really mingle with the males much.

The behavior of bonding is not genetic or pre-determined for platy fish and they interact as they please.

Similarly, you wouldn’t need too many of them in the tank to ensure that they have company and are happily swimming around. Having any number between 4 to 6 will put you in a good starting position.

In fact, as per the opinions of many others who have successfully managed to keep platies for years; having one male for every three females would be a good grouping technique.

This is rather important if you want to ensure that they are breeding and multiplying safely and regularly.

It has been observed that platies tend to mate often, sometimes more than you would like.

If a regular pattern is observed, you might get to see new fries swimming around every 28 days in the tank.

This can become quite a lot to handle if you hadn’t thought this through.

If this is not something you would want, then it is suggested that you keep only a few males and more of the females in the tank. Having them in greater number would make the babies a problem for you to handle and manage.

Platies and other fish

As we have discussed above, platies are pretty friendly fish to have around in the tank.

With a life span of around 5 years, you will find that these fish tend to bond easily with most of the other similar-sized fish.  Some of the most preferred choices of fish that you can keep with these colorful platies include:

You can even keep the bigger tetras like silver tips, black skirts, and red serpaes with them.

They all have proven to be good tank mates for the platies as they seem to blend well with the environment and keep platies happy as well.

Does the size of the fish matter in peaceful schooling? Well, it has been seen that when it comes to schooling, size is a huge factor. While other tank fish are not bothered by the size of the other mates as long as they belong to the same species, it isn’t the case for platies.

To keep them happy, you would have to consider genders along with the sizes of the fish. Females are happier being around other females and thus it is a form of grouping you can look into.

Similarly, try to keep all the fish of the same size. The bigger platies are often seen bullying the smaller ones around and this can cause the younger ones to stress out. Creating a stressful environment defeats the whole purpose of schooling and you need to make dire efforts to ensure that this isn’t the case in your tank.

How to keep your platies happy? Apart from bringing in their buddies, you can also provide these platies with aquarium salt in the tank. It makes them happy too and creates a friendly environment for them to move around in. Although it creates no specific difference at first, but generally people have reported that adding some salt to their tank makes the platies a lot livelier and happier. However, when doing so, make sure that the other species in the tank are not bothered by salty water.

Platies are pretty friendly fish to have around. They are usually happier and not really stressed by much that is happening around them. Creating a group of around 6 of them along with keeping other friendly species of fish would work in your favor.