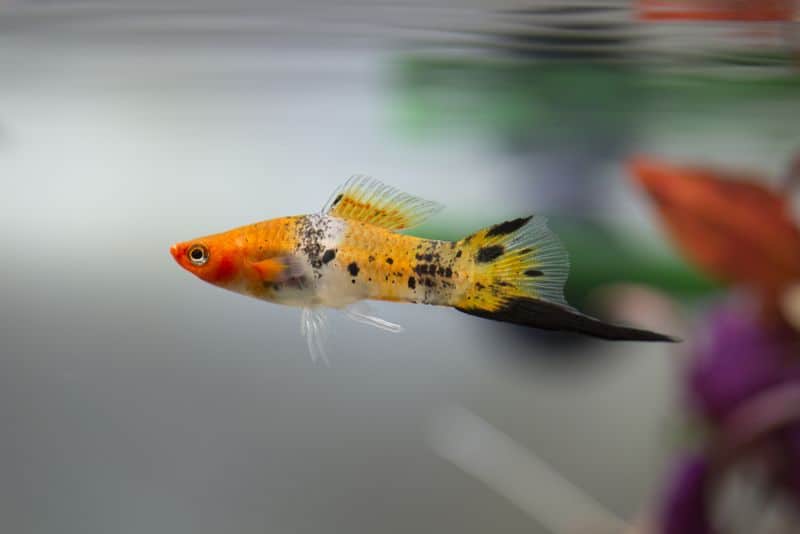 To be able to identify whether your swordtail is the bully, or is being bullied, here are a few things that should be in your knowledge.

Stress as a major reason for fin-nipping

Some fish tend to bite or pinch the fins of other fish, which is basically known as ‘Fin Nipping’. Some species are natural nippers such as barbs and cichlids. While others like swordtails only resort to fin nipping when they are either stressed or aggressive.

If you have identified your swordtail as the aggressive fin-nipper of your tank, then you might as well be determined to bring justice to the weak and set things right. For that, you must first fix whatever’s bothering your little stressed-out bully.

The potential reasons behind a swordtail’s stress and aggression are mentioned below:

Although swordtails are sturdy tropical fish and are able to tolerate a wide range of water conditions. However, sudden drastic changes in water parameters should be avoided. The temperature that best suits swordtails ranges from 65-82° Fahrenheit.  Generally, they prefer moderately alkaline and hard water.

To prevent any possible complications, like fin nipping, it is important to keep a track of water parameters and to keep the water properly filtrated.

The male to female ratio isn’t quite right

Male swordtails tend to be very aggressive towards the males of the same species. So, if your tank isn’t huge, then you should definitely opt for a ratio of 1 male for every 2-3 females. If you keep male swordtails only or too many males, frequent fights will result which would cause the death of weaklings. Being in minority, the females will be constantly chased by the males (building stress upon them) and shortening their lifespan.

The basic care of the swordtail is to provide it with an aquarium that is sufficiently large. It’s not that it can not survive in a 10-gallon tank, but it is not particularly suited to cramped quarters and will seldom breed in this confined space. A 20-30-gallon tank would be much more suitable for the swordtails.

Apart from that, if you are unable to arrange a bigger tank, then at least you should avoid overcrowding. Do not add too many fish to your tank. Because this may result in male swords fighting with males of other species.

Also, the swordtails will not have enough space to swim around which will build up stress not only on swordtails but on almost all the species in your tank.

Swordtails as a victim of fin-nipping

Generally, swordtail fish are very peaceful and active species. They are social and enjoy good company, especially when housed with similar passive species of fish. Swordtails adjust well and make great companions with similar cousins, such as platies, mollies, angelfish or even the peaceful types of Corydoras.

However, care should be taken when adding fish that are larger in size than the swordtails, such as the Tetras, Goldfish, Oscars, etc. Being larger in size, these fish may eat or bully the swordtails. Their extensive fins can also be very much tempting for the bigger fish. If you do not remove the fin-nippers immediately all your swordtails will end up with frayed fins which might not grow back to their full length.

Usually, swordtails will retaliate to such bullies. However, the weak submissive ones may be bullied till death or away from food, the latter of which will result in stunted growth.

It doesn’t matter whether the fin-nipper in your tank is a swordtail or any other fish, you need to stop it as soon as possible. Or else, all the other fish in your tank will suffer from the stress of keeping out of its way.

If the fish is a natural nipper, then the very first thing you should do is to remove the offender from the aquarium and place it in a separate tank of its own. If you can not arrange a separate tank for it, then, unfortunately, it’s time for you to find a new owner for it.

However, if the fish has become a fin-nipper bully due to something unsettling in its environment, then you should figure out what exactly is upsetting your little buddy and solve the problem accordingly.

Again, as mentioned above, swordtails may turn into fin-nippers due to stress and aggression. Thus, it is very important to take the best possible measures to eliminate and avoid swordtail aggression.

Fin-nipping does not only damage a fish’s appearance, but it also makes it susceptible to diseases.

An injured fish should be treated with a fin rot solution to heal nipped fins and prevent infection. That’s because if wounds are left open and untreated, they will attract bacteria of all sorts. In such cases, the injured fish should be given appropriate medicines which mainly include antibiotics (these are easily available in pet shops.)

Moreover, the stress that builds inside the victim fish may continue to affect their health long after the fin-nippers are removed from the tank. This will make them vulnerable to numerous diseases if the problem is not addressed at the right time.

To help your fish, you first need to identify its problem. If you’re not sure, then consulting a vet would be a better option. Generally, you should check if the water parameters are at appropriate levels and whether the water is clean or not. Try changing the place of the aquarium or changing your fish’s feed. Also, do check for any symptoms of illness in your fish.

What does it mean if a swordtail is constantly staying near the surface? Under disturbed circumstances, swordtails may often stay near the surface of the tank. It may be due to a change in routine, environment or water parameters. Make sure the water is properly filtered and the fish are supplied with ample oxygen.

Another possibility is that the swordtail may be developing an illness. Immediate action should be taken if swordtails keep swimming at the top of the tank for a prolonged period.

What are the signs that my fish fight with each other? Apart from fin-nipping, many other symptoms of fighting can be displayed by your fish. For that reason, they should be carefully monitored.

Your fish might have split fins as a result of tussling. The fear of a bully can cause bullied fish to hide more often. You may as well witness scrapes, scratches, torn lips or missing scales. Damage to the eye, wounds, and sores are also a common indication that your fish fight with each other.