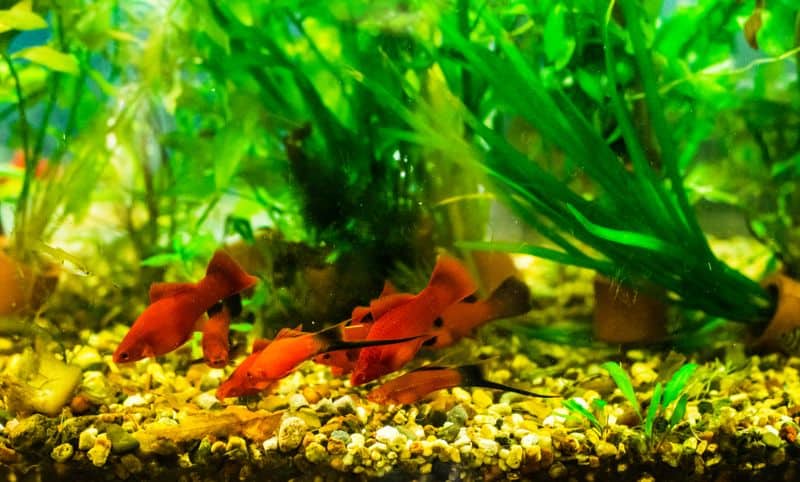 Swordtails tend to bring an energetic aura to the aquarium. But if kept in schools, they may as well bring lots of trouble!

Are Swordtails Schooling Fish? Unlike most community fish, swordtails prefer swimming in a loose group of up to 4-5 members. They can not be kept in larger groups. This is mainly because of the aggressive and territorial nature of the male swordtails. However, they do require some degree of social interaction.

Therefore, to keep your swordtail happy and healthy, it is very important to know about it’s traits and tank-mates.

‘Schooling’ basically refers to the practice of a group of fish swimming in the same direction in a coordinated manner. Their body positions are very much co-ordinated and they have synchronized movements. They do so in order to protect themselves from predators or potential enemies and swim more efficiently.

The schooling ability of fish is influenced by genetic factors. Perhaps, this explains why Swordtails are not known to have schooling abilities despite having a generally peaceful nature. They can, however, be referred to as ‘shoaling’ fish. That is, staying together for social reasons.

Shoaling includes dealing with threats efficiently, companionship, improving their forage etc. It’s nothing to worry about if shoaling fish stop grouping in aquariums. This happens only because, the fish do not see a need of it anymore.
Swordtails make excellent community fish but have a hard time living with many of its own kind in the same tank. This is mainly due to the low tolerance of male swordtail fish towards other males.

As they mature, swordtails have an unusually high desire to express dominance on other male swordtails which eventually leads frequent fights. The alpha male will protect his harem and will pick on the weaker male(s) as many times as he can. This causes the weaker male to go into hiding and builds up immense stress upon him which can even cause death.

Therefore, it is advisable to keep 1 male for every 2-3 female swordtails. This means you can not keep swordtails in large schools. But it will definitely help the male to remain busy and prevent any further territorial disputes. Crowding the tank with only males can help to distribute the aggression evenly but then, the females may have a hard time. Hence, it is better to keep both male and females but in appropriate ratios.

Also, you need to keep a sharp eye on your swordtail, as sometimes they may even eat their own or other fish’s fry.

Swordtails are fast swimmers and hang around on almost all levels of the tank (bottom, middle and surface area).
They require a tank of at least 20 gallons that is well planted and has plenty of room for swimming.
Being an active fish, it will be highly distressed if not provided with enough space to swim around. In low capacity tanks, overcrowding should also be avoided.

Despite the fact, that swordtails are tolerant to a wide range of water temperatures and conditions, drastic changes should be avoided. Swordtails prefer hard and moderately alkaline water with the pH ranging from 7.0 to 8.4. The temperature best suited to the swordtails is 72–82 °F or 22.2–27.7 °C. The water should be regularly changed and properly filtered.

Maintenance of water parameters also involves maintaining appropriate nitrate, nitrite and ammonia levels.
Since swordtails are excellent jumpers, it is very important to keep your tank covered. Especially, if they are new to the tank or environment. Otherwise, they might jump out and you may end up with a dead fish or two.

Swordtails combine well with other good-natured fish of similar size. But as an individual, this fish varies from being peaceful, harmonious tank mates to being bullies. Older males, especially, can become aggressive with each other and other species. Thus, the tank-mates of a swordtail should be selected carefully.

Fish such as Mollies, Platy fish, Angelfish, Armored Catfish (Corydoras) and plecostomus, and larger Characins such as the Black Skirt, Red Serpae, and Silver Tip make good tank mates for the swordtails. However, it is to be noted that swordtails and platies might sometimes interbreed. If you do not wish to fill your tank up with a mix breed offspring, you should immediately separate the two!
Also, fin nippers such as certain kinds of tetra should be avoided as the elongated fins of the swordtails can be very much tempting for them.

Fish like Goldfish, Oscars and certain types of Cichlids are not compatible with swordtails either as they have different environmental and nutritional requirements. Also, they do not let the swordtails live in peace. They may either eat or kill the swordtails.

A thorough research is highly recommended whenever adding tank-mates for your fish.

Is it okay to keep male and female swordtails in separate tanks? Keeping female swordtails in a separate tank is actually pretty convenient. However, isolating the males can become a problem. Initially, the genetic aggression between them will be evenly distributed and none of the swordtail will be targeted much. But with the passage of time, males might feel a bit lonely and may become depressed. This can deteriorate their health. For that reason, it is advised to keep them combined with a ratio of 1 male for every 2-3 females.

Why is my female swordtail aggressive? There can be a number of reasons as to why a female swordtail becomes aggressive. Such a behaviour may be observed when a fish is introduced to a new environment or if a male swordtail is chasing a young or pregnant female around. The swordtails are somewhat shoaling fish as well, so make sure you add in at least 3-4 of the same kind in your tank. Otherwise, the swordtail fish, be it a male or female, might feel isolated and will become aggressive.

Can female swordtail change their gender?This is a common misconception, but a female swordtail has never been observed to develop a male sword after giving birth. Therefore, it would be incorrect to say that swordtails change their gender. However, late-developing males can often be confused as females. Some males do not mature early and develop the “sword” a bit late.
In order to avoid such confusions, the tail should not be relied upon for gender identification. Instead, the presence or lack of the simple gonopodium should be used for that purpose.

Why is my swordtail hiding constantly? If you have recently brought your swordtail to the aquarium and it begins hiding, then it might just be adjusting to the new environment. Or let’s say, its just a shy fish and you shouldn’t be worried. All you need to do is to give it some time to adjust and socialize. If it prolongs this unusual behaviour, then try adding some fish to your tank that are compatible with swordtails.

But if you have had your swordtail for a while and it begins behaving strangely, then you might as well recheck your water parameters. If they’re perfectly aligned with the swordtail’s requirement, then look for any possible bullying or harassment cases in the tank so that you may address the issue accordingly.

If that possibility rules out too, then you have to examine your swordtail’s body really closely to look for any signs of illness as that might be the reason for its odd behaviour.