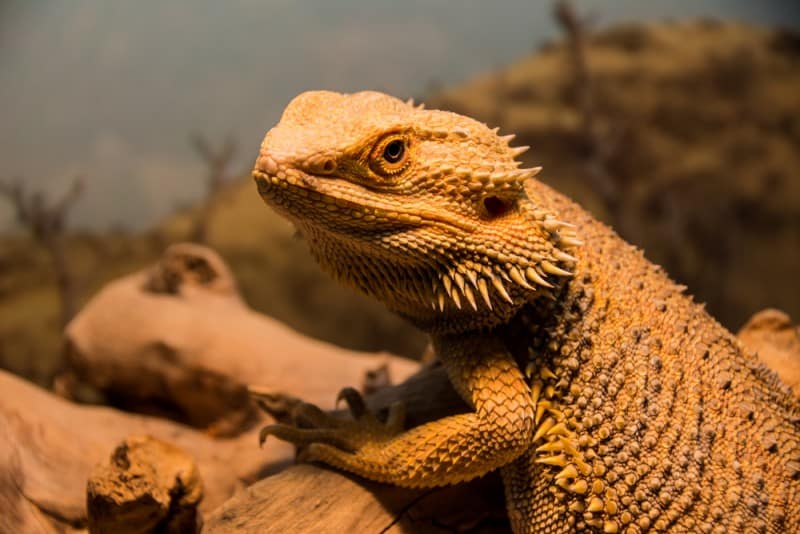 Did you just witness your bearded dragon wave at you?

Are you thinking about waving back at it?

Are you scared that it’ll mean submitting to your bearded dragon?

Well, let me solve your problem:

Why Do Bearded Dragons Wave?

Waving is common for bearded dragons, and waving back is your own choice. If you wave back, it shows that you are submitting to them. This can either be appreciated by your dragon and they’ll get more comfortable or they’ll just be confused. Either way, waving back at them won’t cause any harm to either of you.

Should you wave back or not?

So let’s get this question out of the way first.

However, it’s not the waving you should be concerned about, but rather the reason behind it. And especially to other things or in other situations. Those can indicate that maybe your bearded dragon is uneasy.

What are those reasons? Read on below to find out.

Why do bearded dragons’ wave?

When I talk about the bearded dragons and their act of waving, I literally mean waving. They would literally raise either of their front feet and move it across in a semicircle motion.

There are many misconceptions about why they wave, and one of them is that your little friend reptile is saying hello. It does sound cute but obviously it’s not true.

So, before you start to develop any misconceptions, I’ll tell you why they wave.

The most common and widely known reason for a bearded dragon waving is submission. When these bearded dragons see someone superior to them, they wave their hand and submit themselves.

Even in the wild, when they see a superior dragon, they wave at them. Whereas the superior bearded dragon bobs its head to enforce its superiority.

Presence of another bearded dragon

Waving is an act of communicating when it comes to bearded dragons. If they see another dragon near them, they may wave at them. It may be a sign of them being scared or them taking charge or showing their authority. It can either be “Hey! I see you and I am aware of your presence” or “Hey! You’re in command and I’m fine with that”.

It’s not just their other mates but they may also wave at other pets in the house, like a cat or a dog. So, try and look out for the reasons why your bearded dragon is waving.

Bearded dragons also wave when they are scared. If you have another pet in the house, and it visits or comes in the sight of your dragon often, chances are that they may be scared and submitting themselves to the other pet.

Although the other pets in your house are very sweet and harmless, your bearded dragon is not aware of this fact. Hence they would wave and submit to them because they fear other pets not just because of their presence, but also because of their size. They may be saying “Hey! Please don’t hurt me”

It is best advised that you keep your pets afar from each other because your bearded dragon may get scared easily and get uncomfortable, which I am sure you wouldn’t want.

Does your bearded dragon’s tank have a mirror or a shiny surface?

Is the tank reflective?

If so, the waving may be a result of that. Yes, the poor thing sees its own reflection and they think that there is another bearded dragon in the tank, and this may result in them waving and submitting to themselves.

The act may happen at different timings and when there are no other visitors around. Your bearded dragon may also try and scratch the glass or move around faster than normal because the poor little fellow might be scared.

Make sure these other behaviors occur with waving act or else there may be something other than their own reflection that is causing them to act abnormally.

Like most pets, bearded dragons are also not a fan of change and feel uneasy after a change occurs. The change can be moving from one room to another, moving into a new tank, or even a new corner in the room, it can make them uncomfortable and they may start waving. This will settle down as soon as they get comfortable with the new spot.

These reptiles are very observant of their environment. If they see a toy or some kind of clothing near their tank, they may easily confuse it with a predator and start waving at them to ensure they don’t get hurt.

Try and remove any such things and see if there is some change in the waving. If it stops, it was definitely the object present in the room.

Just like humans, when baby beardies see each other, they may not react or show signs of aggression but still be seen waving. This kind of activity means that they are just trying to interact with each other and nothing else.

But one thing that you will have to be sure about will be that neither of them gets aggressive at any given time. This may mean that they want their territory to themselves because let’s face it, bearded dragons are a reptile of solitary, be it in captivity or in wild.

Are they seeing outside?

If your beardie’s tank is placed somewhere near a window and they can see outside easily, it can have a very positive effect on them.

But, this also has its problems, in case your little pet sees some birds or a cat outside from the window, they may think of them as threats. This can result in the waving activity.

Keep an eye out for these minor things to ensure your reptile friend is comfortable in its house.

As mentioned before, bearded dragons like to have their space to themselves, whether they are in the wild or in captivity.

Even in the wild, bearded dragons don’t prefer to roam around together. And if they are in a group, it’ll be a loose one, where any one of them can move away from the rest very easily to maintain their own space.

Therefore it is advised to keep the dragons in seperate tanks.

What does it mean when a bearded dragon opens its mouth at you?

Why do bearded dragons close their eyes when you pet them?

It’s their way of communicating that they don’t like being petted. Try and hold them up, and if they still close their eyes, they are not liking this either. So just let them stay in their tanks.

How do you tell if a bearded dragon likes you?

Bearded dragons show their liking towards their owner in multiple ways: