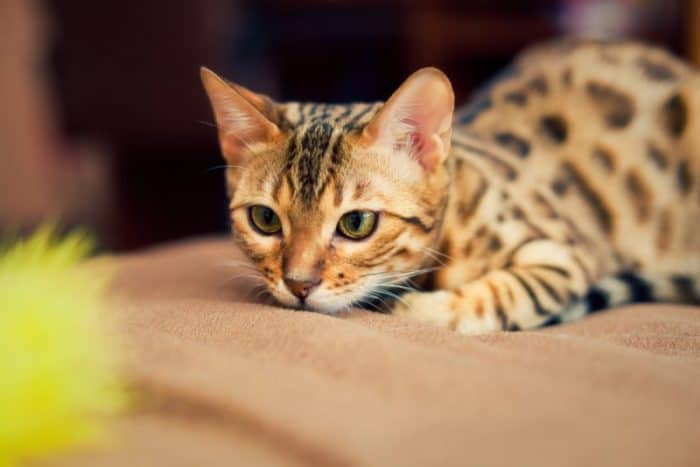 I have always been mesmerized by the changing eye color of Bengal cats. So, I finally decided to write an article on this topic.

Do Bengal cat’s eyes change color? Although some Bengal cats do change their eye color, a lot of them don’t. There are some clear patterns based on age and eye color of the kitten which can help you distinguish whether yours would change its eye color or not.

The changing color of Bengal cat’s eyes is something that we need to dig deeper into in order to understand its complete scope.

An overview of Bengal cat’s eyes, eye-color, and shape

The innocence of their eyes mingled with beautiful color combinations that match their upper furry coat is amazing to witness. No wonder why pet cat owners do not seem to get enough of these alluring eyes.

The eyes of a Bengal cat are a bit different from those of a regular domestic cat. But not just that; all Bengal cats do not have the same type of eyes either.

From their shape to intensity and colors, the eyes of all Bengal cats are somewhat similar to each other, yet have some major differences.

For instance, the eyes of Bengal cats are mostly round-shaped but the edges might vary. So, if you wish to actually understand the anatomy of Bengal cat’s eyes, then the first thing to do is have a general idea of its color and shape.

As stated earlier, it happens in most of the cases that the Bengal cat’s eyes change color at some point between 4 weeks to 1 year of age.

However, some of the breeders and Bengal cat owners also claim to have not witnessed any minor change in the color of their cat’s eyes.

This means that although the breed does have the tendency of changing eye color until 1 year of age, the color transformation is not a sure thing.

Also, people have varying experiences as the eyes of their Bengal cats have reportedly changed from orange to green or brown to golden and vice versa.

As I have been lucky enough with my Bengal beauties and their changing eye colors, let’s look into some more information about different color combinations of eyes and their anatomic layout.

The anatomy of the Bengal cat’s eyes

Given below is a detailed description of a Bengal cat’s eyes.

The shape of all the Bengal kittens’ eyes is circular. The round shape starts from the ears and ends in a slightly pointed structure near the nose. This is also the usual shape of a cat’s eyes but unlike the other breeds, Bengal’s eyes look more innocent yet furious at the same time.

Bengal cat’s eyes are not bulging outwards at all.

They are more “digging inside” rather than popping outside like those of a domestic cat.

The intensity of the eye’s shape is more related to their predecessors that belong to the wild animal family. This intense look of the eyes in Bengal cats plays a major role in making them appear wilder and frantic.

The Bengal cat’s general look is pretty much similar to a wild Asian Leopard cat.

So, when we talk about the gap between both the eyes, it is similar to that of the Asian Leopard cat. This means that the usual gap in domestic cat’s eyes is not found in Bengals.

The nose is more bulged towards the outside that happens to make the gap lesser and hence, the Bengal appears like a wild animal.

Variety of eye colors in a Bengal cat

The most common eye colors in Bengal cats are:

Most of the Bengal cat owners, including me, would agree to the fact that all these three colors are somewhat related to each other in a sense that either of the colors is likely to transform into the other.

For example, if the cat’s eye color is orange, then chances are that it might change into green. Similarly, brown color sometimes changes into golden, but that is very rare as it usually converts into orange or some other closer shade.

I have personally seen some Bengal cats with a golden and blue eye color, but neither the breeder nor the owner had any idea of how it happened or the logic behind it.

The eye color of Bengal cats either remains the same or changes later into something that is never expected out of it.

Other than this, seal sepia and seal mink are types of Bengal cats that are born with lighter shades of eye color which can also change into light orange or brown.

If you really wish to go into details like different stages of Bengal cat’s eye colors, then here is a list that would help gain some basic knowledge about it:

Is there a connection between the coat and eye color of a Bengal cat? Some of the Bengal cat owners claim that the color of the eyes is related to that of the coat. For instance, if the coat’s color is brown, then the eye color would be orange or golden.

Moreover, the eye color of seal sepia and seal mink is always light that compliments their coat’s color quite well.

So, if you have a Bengal cat that is brown colored or its pattern is shaded in brown, then the eye color would probably match its coat.

Although the golden color is commonly found in newborn Bengal kittens, it usually changes into green, orange or hazel. Also, some Bengal cat owners with a rare shade of the eye color claim for the animal to be relatively expensive.

Having said that, the color of the eyes is not one that matters in how the cat will turn out to be physically or nature-wise.

Do half Bengal cats also change eye color? Not necessarily. The thing is that almost all mammals, including humans, have the natural tendency of changing their eye color early after birth.

If a Bengal cat is born with shiny blue eyes, then the color will probably become lighter or change completely into light brown or hazel.

When to stop expecting a Bengal cat’s eye color to change? If your kitten does not change its eye color until 1 year of age, then there is no possibility that it will begin afterward.

A lot of Bengal cat owners are seen inquiring their cat’s eye color on online forums with pictures. They are curious to know if they should still expect a big change after 1 year of their Bengal’s birth.

Therefore, the best thing that I would suggest to do is remain satisfied and happy with what you have and love the pet regardless of its physical features.

Why Do Cat Eyes Shine in Photos?