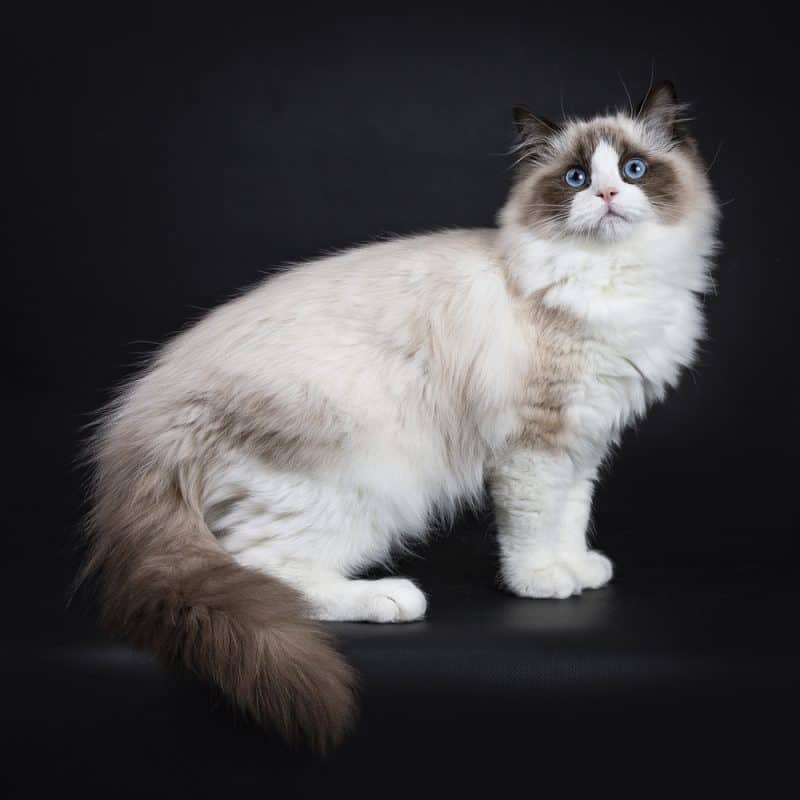 The award for the cuddliest, fluffiest and the most adorable cat goes to…. Birmans or Ragdolls?

If you are new to the entire cat enthusiast galaxy, then I’m sure you will easily confuse both these cat breeds with one another. Birmans and Ragdolls are more alike than you think.

Differences between the Birman and Ragdoll cat breed? Birman and Ragdolls are cats that are quite similar to one another in terms of their appearance, but when it comes to their size, Ragdolls are much larger than Birman cats. Another big difference between the two is that Birmans tend to shed less and hence require less grooming as compared to their Ragdoll counterparts.

Let’s take a look at some other differences between Ragdoll and Birman cats. 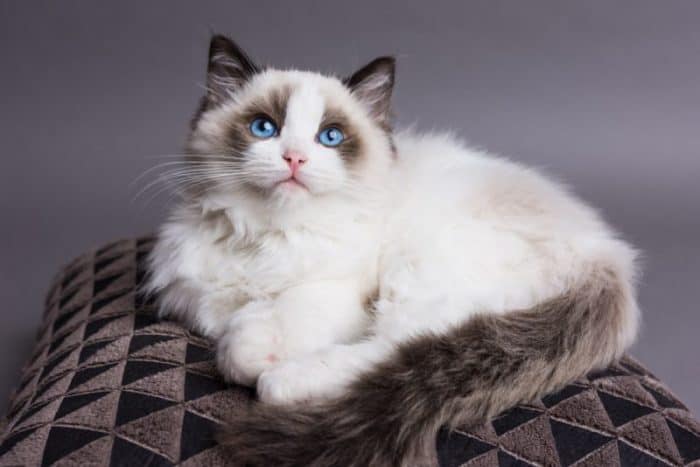 Ragdolls are extremely lovable creatures that love to be the center of attention. These beauties, unlike most cats, love to be picked up and go limp like a ragdoll once you pick them up, hence the name. They are also called puppy cats because of their lovable nature.

Ragdolls form a deep bond with their owners and love to follow them around the house. Ragdolls have a very mellow personality, and they are not as vocal as most cat breeds, they are actually one of the quietest cat breeds on the planet. These cats are a great addition to any household, and they are ultimate lap cats.

These beautiful creatures are attached to their owners, but that doesn’t mean that they don’t get along with new people. Ragdolls are curious, and they love to socialize with strangers, this is why it is very easy for Ragdolls to get stolen as they do not resist much.

Another great thing about this breed is that they are not big climbers. This means that your shelves and furniture are safe. Ragdolls usually like staying close to the ground, and the most they will do is jump on the sofa.

Ragdolls are known to be excellent companions, and they are never pushy. They love to spend hours with their masters and are rarely known to bother them. Another distinctive personality trait of Ragdolls is that they aren’t really that active. They prefer to spend their days relaxing or sleeping.

Birman Cats are loyal, loving, gentle, and social creatures that are also stunning to look at. These kitties get easily attached to their owners and are known to be super affectionate. The best thing about Birman cats is that they get along well with not just children but also other pets such as birds and dogs.

These cats are really intelligent, and because of that, they are easy to train. Another fact about Birman cats is that they are usually soft-spoken and their voice has a bell-like a ring to it. Hence, these friendly creatures are anything but noisy.

If you are someone who does not have a lot of time on their hands, then getting a Birman might not be the best decision you make. Birmans, unlike most cats, don’t do that well alone. They are social creatures, and solitude is something they do not prefer. These kitties love to interact with others, and I would not recommend leaving a Birman alone for hours on end.

Ragdolls have a medium to large build and can weigh anywhere between 3.6 to 6.8 kilograms. That said male Ragdolls are much larger than female Ragdolls, the males weighing about 5.4 to 9.1 kilograms or even more.

They have wedge-shaped heads, and their skulls are rounded muzzles with flat tops paired with chubby cheeks. Ragdolls have a medium-sized body with very soft and thick hair, and their tails are super fluffy.

Ragdolls are bicolored felines with white legs and an inverted V on their face. They also have a white abdomen and seldom can you find a Ragdoll with black patches and stripes on its back.

They have dark tones on their nose, tails, legs, and ears. Ragdolls can be found in six different colors such as chocolate, seal, red, blue, cream and lilac, etc.

Ragdolls have big eyes and are different shades of blue. All in all, they have a very intense look. These long-haired felines are stunning to look at.

Birmans are known for their distinctive big blue eyes, and all Birman kittens are born with blue eyes. Unlike most cat breeds, Birmans are not prone to any eyesight issues.

These fluffy creatures are long-haired, and they have single layer and silky fur all over their bodies. These creatures do not need to be groomed as much as Ragdolls as they do not have an undercoat and so are less prone to matting and shedding. Weekly brushing is sufficient for these felines. Birmans also possess a coat that is in shades of white an cream.

Birmans have a rectangular body that is medium in size with a broad face and distinct Roman nose. They have big rounded eyes that can be found in all shades of blue. They have cute little ears that are of the perfect size both in width as well as height.

The trademark of this breed is their pure white contrasting symmetrical gloves on each paw, and these gloves tend to extend to the back of their legs finishing with an inverted V extended half to three fourths up their hock.

The Ragdoll is a fairly new breed as compared to breeds such as Persians that are though to be around for hundreds of years. There isn’t any recorded history when it comes to Ragdolls, but experts believe in two or three different theories.

One theory is that Ragdolls were selected by a woman known as Anne Baker in the early 1960s. She is said to have chosen cats that have a similar experience to the Ragdolls we know of today.

It is believed that Anne Baker borrowed cats for her Black Persian breeding program that is where she saw a handsome male cat. The beautiful kitty looked like a male Birman. This male cat was the offspring of a female white angora cat known as Josephine. The male cat was named Raggedy Ann Daddy Warbucks. Ann Baker then used this male cat to produce litters that shared his amazing features. She also went ahead and used his brother, Blackie to diversify the gene pool further.

Another legend is that Ann Baker adopted Josephine from a shelter, and the poor kitty was involved in an accident. The accident left Josephine immune to pain, which resulted in her relaxed and floppy personality. This is how the Ragdolls get their name; they go limp like a Ragdoll when they are picked up. 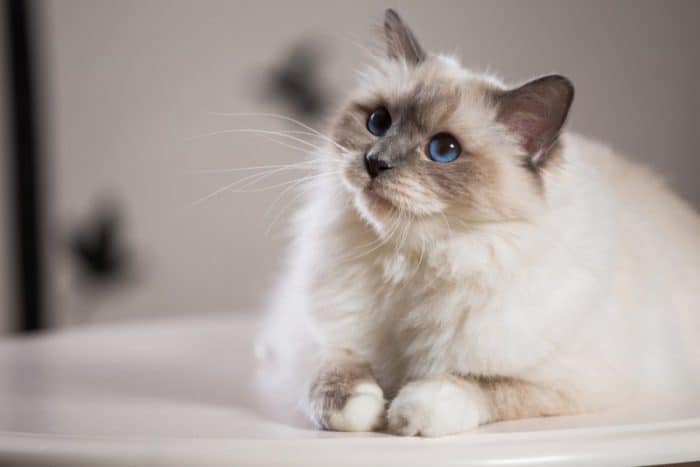 As apparent from its name, Birman cats are said to have originated from Burma where they were pets to the Kittah monks. These cats were considered to be sacred. In 1919 the Kittah people gifted a Birman pair to two Englishmen in France, Auguste Pavie and Major Gordon Russell. These beauties were sent to the Englishmen as a thank you gesture for saving the temple of the Kittah people.

Unluckily, the male Birman could not make it while the female kitten survived and then produced a litter or Birman kittens. This was the introduction of the Birman Cat breed in the western world. Due to the war, a lot of pedigree breeds suffered and so did the Birman cat breed. After the war only two Birmans were left, Xenia Kaaba and Orloff. The offsprings of this pair help to re-establish the foothold of their stunning creatures in France.

In the 1950s Birman litters were produced using Birman parents. By 1955 the Birman cat breed was recognized as a purebred aristocrat in Europe.

The first recorded Birman pair was imported to the US in 1959 by Dr. and Mrs. John Seipel. Frances Price is actually the oldest Birman breeder in the United States of America. She has been running a successful breeding program for over 30 years.

Ragdolls are not as active as most cat breed such as the Bengal and their slow lifestyle can actually lead to them getting obese. Obesity can lead to several different health conditions, such as diabetes.

Each individual disease stated above has its own list of symptoms, but here are some of the most common signs that may indicate a urinary tract disorder:

Another prevalent problem in long-haired cats such as Ragdolls is hairballs. Ragdolls can suffer from digestive issues due to the accumulation of hair. Cats clean themselves, and that results in them accidentally ingesting loose hair which can easily accumulate in the digestive tract and cause problems.

If your cat is unable to pass the hair naturally, then you might notice the following symptoms:

Another disease that can be frequently seen in Ragdolls is the Polycystic Kidney disease, which is a hereditary disease. In this disease, cysts filled with; liquid grows within the kidney of the cat. As the cat grows, the cysts too increase in size and can even lead to severe outcomes such as kidney failure.

Birmans, like most cats, suffer from gum and dental diseases. The gum disease is a result of the accumulation of bacteria, food, and minerals along the gum line. This can cause the deep structures of the teeth to become inflamed. Tar is formed on the gums, and when it undermines the gums, it’s known as gingivitis. Due to this small pockets form between the teeth and the gums that harbor bacteria and promote bacteria growth. This gum infection can actually spread throughout the body and lead to liver and kidney failure. You can help your cat by brushing its teeth and feeding it dry food.

Another health condition that is prevalent in Birmans is feline lower urinary tract disease. This affects that bladder as well as the urethra of the cat. This condition can be a result of stress, bladder crystals, bladder stones, not urinating enough or infections.

Birman cats are prone to a heart disease known as hypertrophic cardiomyopathy, which can lead to heart failure. The sad thing about this condition is that it cannot be cured, but it can be controlled using medication.

Birman Cats also suffer from problems that affect the gastrointestinal tract. Gastroenteritis is a health condition that is caused by an infection, obstruction within the bowel, or poisoning.

Ragdolls can cost around 400 to 500 dollars, and if you are looking for show quality cats, then the rate can go as high as 1000 dollars and above.

You can purchase a Birman kitten for about 400 to 600 dollars on average. The cost really depends on the breeder. Honestly, it’s a very small price to pay for such a beautiful feline.

Ragdolls can live up to 15 years or more an average provided they get everything they need to stay healthy.

Birman cats live up to 12 to 16 years on average. So if you are looking for a companion that will stick by your side for a long time, choose a Birman.

Some Birman cats may have this instinct to give small nips, usually when they feel overexcited or are feeling a strong bond with their owner. But they are a very loving breed and are safe to keep with children and other pets.

The Ragdoll is an affectionate and intelligent cat. Ragdoll cats tend to be more interested in humans than some breeds of cats.