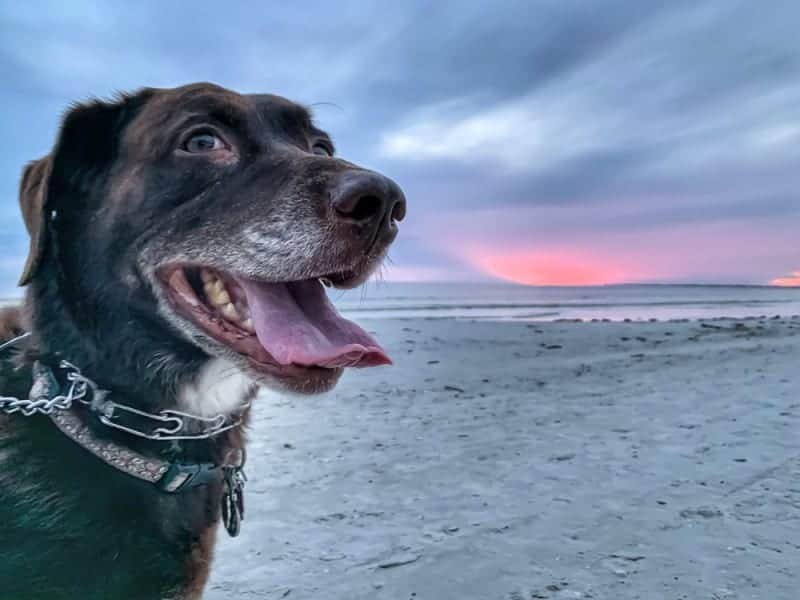 Labradors are perhaps one of the most popular breeds all over the world. But, some people are conscious about their dogs being authentic breeds. Therefore, I will discuss why black labs have white spots.

There are all sorts of possible shades that Labrador Retrievers can be born with. They range from cream to yellow to red for colored Labradors. In fact, you can even find silver Labradors, although they may be somewhat of a rarity. But, Kennel clubs and breedings authorities officially recognize only three coat colors:

But, there can be slight variations in the officially recognized colors. You might ask yourself, Why Does My Black Lab Have White Spots? Some black labradors have white spots or mismarks, but that doesn’t necessarily mean they aren’t purebred labradors.

Historical Importance of the Black Coat

You might believe that the Labradors originated from the place, Labrador. But in reality, the Labradors originate from St. John’s dog of Newfoundland, Canada. Yellow and Chocolate Labradors were not considered desirable and discriminated against. Black has long been the preferred color among the labradors. Interestingly, discrimination against the chocolate and yellow labs exist simply because people think black ones are more clever.

As absurd as it may sound,

Until the turn of the 20th century, yellow and chocolate lab puppies were frequently euthanized at birth. The idea was to only breed black labradors going forward. Fortunately, their color depends on complex genetics, which is why gorgeous varieties of labradors still exist. Now, let’s take a look at genetics.

What Makes The Coat Color?

The three coat colors recognized in Labrador Retrievers result from two genetic loci. The first gene effect is called B (brown) locus along with its recessive mutant ‘b’. The second is called E (extension) trait along with its recessive mutant variant ‘e’.
How these two genes, also known as ‘alleles’, are present in the DNA actually determines the color of the Labrador. The mentioned gene alleles interplay between two genes in the form of BB, Bb or bb and EE, Ee, or ee. Let’s take a look at the combinations and their corresponding colors:

You can read more about their genetics from this excellent resource.

Color oddities have been found from time to time in Labradors. Moreover, these mismark have been recorded for well-documented dogs. People generally have a misconception that mismarks are a sign that a labrador is not purebred. Actually, the pedigree of these dogs says otherwise. Mismarks can, in fact, occur in purebred dogs too.

These color oddities can be found in the form of white hair markings on the chest, a white ring on the tail, brindling, and other forms of markings on the various body parts. These markings are called Mismarks, and they occur rarely in certain labs.

You must be wondering:

The mismark might indicate the possibility of having a mixed breed labrador, but by no means does it prove it. Labrador ancestors, the St. John’s dog, had mismarks on their feet, chest, and muzzle area.

Owners of black labs who are unfamiliar with these mismarks often have doubts in their minds. They ask themselves things like:

Fret not, as this article will go through all of your queries and possibly clear out all your confusions.

Getting Your Labrador Registered

If you own a purebred dog, you should definitely get it registered. Most of the time, the breeders get your dog registered under an official kennel authority when it’s just a pup. Some notable kennel clubs are:

The dog registries have been upholding the integrity of the registry for a long time and hence have attained certain breeding standards to verify a purebred labrador. Only purebred labradors can be registered under a registry. According to AKC, a small white mismark is permissible on the chest but not desirable.

ALL About Labs (Video)

How to Confirm if a Labrador is Purebred

For all owners/breeders with a mismarked black lab, it’s recommended to get a DNA profile and registry done under an affiliated Kennel Authority.

What are Purebred Labrador Breeding Standards:

The AKC has set certain breeding standards for Labradors. These standards include guidelines about the size, shape, and color of various aspects of a Labrador.

The AKC describes a lab’s temperament as “gentle, outgoing and non-aggressive“. A mixed-breed might show a different temperament. Labradors are effortless in their movement and make excellent companions. In fact, their behavior truly does justice to the term, “Man’s best friend.”

Where do Bolo Pads Come From?

Dual FC CH Banchory Bolo (1915-1927) was the first dog to earn the dual championship in England. He was a part of the Labrador Club; Banchory Kennel. Bolo was a carrier of the chocolate gene and had a trait of white hair under the feet/paws. Banchory Bolo had gained popularity and was one of the earliest dogs with these spots under its feet; hence the name “Bolo Marks” or “Bolo Spots”. The Bolo marks are not considered mismarks.

Despite all the breeding standards and registration issues that might occur due to the mismarks, one should accept their lab just like any other purebred. Failure to meet the registry standards do not make any dog less worthy of acceptance. The standards are arbitrary and man-made. The grim reality is that dogs are not photocopying machines. A little melanin here and there should not make a dog less worthy of the same love and affection.
The best way to deal with this misconception is to educate ourselves. We should spread awareness and clear any misconceptions regarding mismarks. A mismark does not make your Black Lab any less of a Labrador.

It’s about time we discuss further queries owners have relating to their labradors.

Can purebred Labradors have white markings?
Yes, they can. While they may indicate a mix breed dog, mismarks do not guarantee that a dog is a mix bred. Mismarks can occur in all 3 color types in a Labrador Retriever. They are completely normal, occur naturally, and do not indicate any medical issues. These spots are most commonly found on their chest, feet, and tail.

Are Black Labs smart?
Loyalty, affableness, and companionship are two of the primary personality traits of Labradors. They are the preferred breed for family dogs and hunting companions. Moreover, they make excellent security dogs, guide dogs for the disabled as well as an amazing company for kids and the elderly. So yes, they are quite smart and adapt to a variety of roles easily.

Can Labradors have white patches?
Labrador Retrievers, since their origination in the Newfoundland, have had white spots on their coats known as mismarks. These mismarks are naturally formed due to their ancestral gene structure, and there is nothing medically wrong about it. In fact, the AKC Labrador even allows for dogs with a small white spot on the chest.

1 thought on “Why Does My Black Lab Have White Spots?”