British Shorthair versus Exotic Shorthair – the Cheshire cat or the lazy man’s Persian?

This is such a tough choice to make!

Let’s dig in deeper in their furry coats to find out more!

An adorable cross between the Persian and American Shorthair cats, the Exotic Shorthair cats are here to woo you. They have this infectiously happy personality with just the right amount of flare and feisty.

They are mischievous and adventurous, they will liven your house up with their little mischiefs and adorable personality. 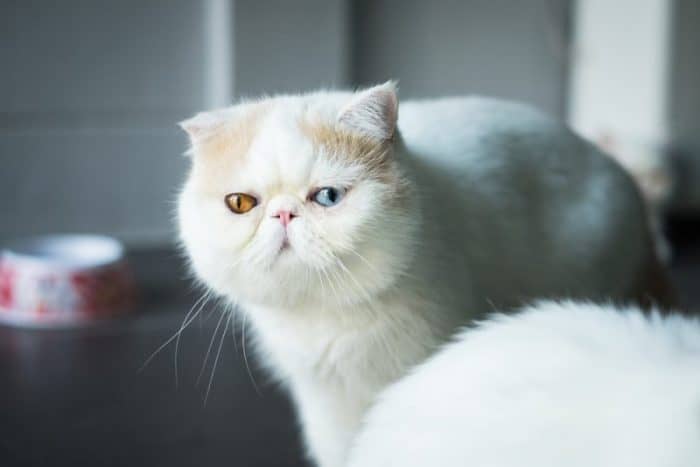 Here’s the best thing about the Exotic Shorthairs:

They are hyperactive and mischievous but they are not difficult to look after. They have this no-drama temperament and won’t demand excessive attention. When they do need your attention though, they’ll let you know by snuggling up with you or by playfully biting at your feet.

These cats are generally very affectionate and they get along with kids and all members of the family. Being the loyal cats that they are, Exotic Shorthairs will always be more attached to their direct owner than any other member of the family.

They are not very chatty, they’d rather stay quiet. Ideal for pet owners who need their house to be quiet or aren’t big fans of excessive meowing.

This sturdy little British fella is more calm, composed and likes to keep to itself. British Shorthairs might seem distant but they are actually very affectionate. They just have their own way of showing their affection. They won’t cuddle with you but they’ll follow you all around the house. They aren’t very physically affectionate but they’d be there to greet you at the door every single time you come back from work. They love and love dearly but in their own furry way.

The most noteworthy trait of a British Shorthair is their patience. They have the temperament of angels. They are patient, intelligent, quiet and non-reactive.

Originally bred from the European Wildcat and the Egyptian Domestic cat, British Shorthairs have the hunting instincts of their European ancestors. So, having a rodent pet around a British Shorthair isn’t the best idea.

British Shorthair versus Exotic Shorthair: Can You Trust Them Around Kids And Pets? 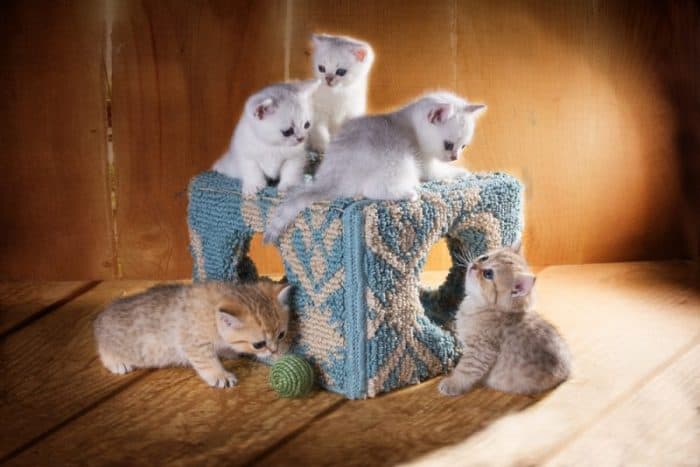 Exotic Shorthair- The Friendliest of Cats

The Exotic Shorthair is an absolute delight with children. They get along to kids of all ages as they are playful, very active and extremely adorable.

Be it any game, the Exotic Shorthair is always up for it!

Cats, even the friendliest ones, can go violent if they get hurt. So, make sure your children know that your cat is a living being just like them and not a toy.

Exotic Shorthairs make friends with other pet animals pretty soon as well. May it be a rabbit, another cat or even a dog, they have the potential to become the best of friends.

You need to keep one thing in mind:

Exotic Shorthairs get really stressed around clingy or overly friendly cats and dogs. They also develop strange stressed responses towards aggressive animals. You will have to make sure that the said animal is socialized and trained enough for it to be around other animals.

British Shorthairs – Patient To a Fault

British Shorthair cats are amazing with children. They have just the right amount of patience to deal with children (that’s right, their patience knows no bounds). Actually, they both are quite beneficial for each other.

British Shorthairs can get quite lazy. Children actually help to make them active and pull them out of their usual lazy routines. This is a very good change for these cats.

An important thing here is that you must supervise your kids around this cat. British Shorthairs are actual angels when it comes to patience but that doesn’t mean you can let little kids hurt your cat. Children can think of the cat as a toy and might hurt it by accident, so you need to keep a close check on them during playtime. Educate your kids early on about the cat though, let them know that it has feelings just like them, it gets hurt exactly like them as well.

Just like children, British Shorthairs get along quite well with other animals as well. They will have fun playtime with dogs and other cats.

You need to keep British Shorthairs away from birds and rodents, they are hunters after all! 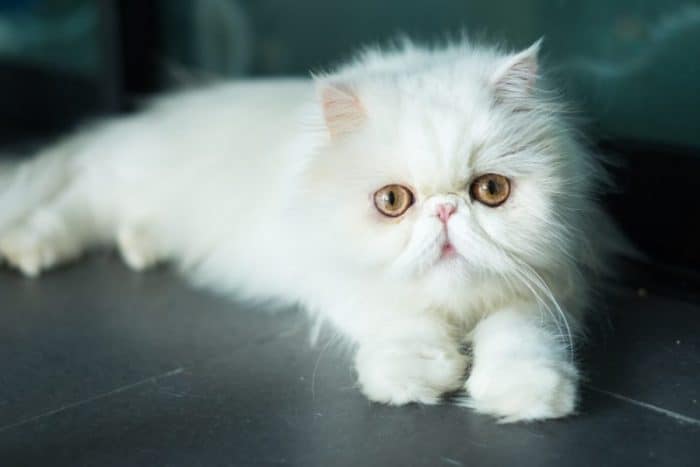 Both these cat breeds have thick coats that need regular grooming. They both are brachycephalic to varying degrees that means they have a flat face, foldings around their nasal region and are not likely to but can develop breathing issues. And, they both need to have a proper diet intake to remain healthy.

Exotic Shorthairs have thick, glossy coats of short hair that needs to be groomed every other week to minimize shedding and maintain the sleek, shiny look. They tend to shed more in summers relative to winters, so that’s when you need to groom them once every week.

Exotic Shorthairs have a number of foldings around their eyes and nasal region. You need to wipe those folds clean with a damp cloth. Exotic Shorthairs tend to get some dirt accumulated in these folds. There is also the mucus and tear residue buildup. So, to avoid any kind of infections and make sure your cat is completely clean, wipe those folds regularly along with the general brushing and grooming.

British Shorthairs also need to be groomed once every two weeks. They don’t shed as much as the exotic shorthairs but their thick coat of fur does need brushing every fortnight. Other than a few regular rituals, British Shorthairs do not need any elaborate grooming routines.

One thing that you can’t forget:

British Shorthairs are one of the healthiest breeds out there. They don’t get sick often and lead quite healthy lives.

They do have a few genetic diseases namely:

British Shorthairs are mildly brachycephalic but they don’t suffer from any retinal or respiratory problems that are linked to the flat skull condition.

Another health problem of the British Shorthairs is their obesity. The lazy british fella doesn’t like to move but loves to overeat, which can lead to serious weight problems. With the British Shorthair, your prime concern must be to get them moving. Make sure you engage them in physical activities on a daily basis.

These diseases, however, do not surface up often in British Shorthairs as the cats carrying these diseases aren’t allowed to breed.

Exotic Shorthairs, on the other hand, have quite a few genetic problems:

Intelligent, patient, calm and collected, easy-going – that’s a British Shorthair cat for you.

British Shorthairs are not as active as other cat breeds, but they are way more intelligent than a number of cat breeds combined. You can train them to do tricks, play interactive games with them and even have them solve those cat-puzzles.

British Shorthairs are actually a crossbreed of the European wildcats and Egyptian domestic cats – hunting instincts are in their blood. So, don’t be surprised when you see your British Shorthair hunting up a mouse, rodent or even a bird, this is what they were born to do!

British Shorthairs have this thick, plush coat of fur that is undeniably one of their most striking features. This furry coat has actually two layers and this is what gives them quite a plush and furry look. The outer coat doesn’t shed as much as the inner coat does.

There’s no shedding a good grooming routine can’t take care of though, just make sure you groom your cat once every two weeks. This will keep the shedding to a minimum.