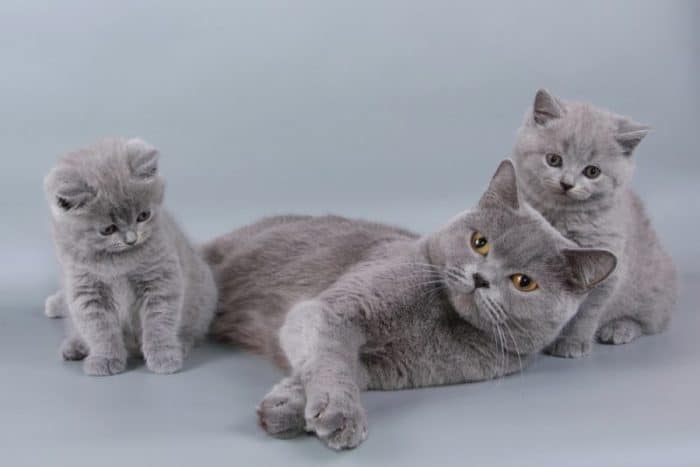 The British Shorthair and Scottish Fold are two very similar cat breeds with a few but very significant differences. Your pet is your reflection so that this decision can become a little tricky.

British Shorthair cats are sturdy, independent, loyal and very affectionate cats. They have a rather subtle way of expressing their affection and love for you. They are patient; they don’t react or show violence of any kind. They can be classified as a loving, introverted cat. However, if you are looking for an energetic, cuddly buddy, then Scottish Fold is just the right cat for you.

Still confused? Read on to make a more educated decision!

Peeking Into The Origins 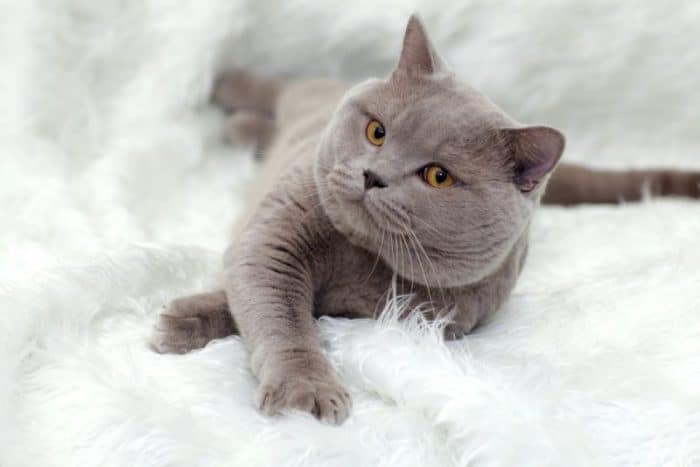 This British-blue cat was the first-ever cat to be exhibited at a cat show and that too, in the mighty palace of Queen Victoria!

The patient and affectionate British Shorthair “Cheshire cat” seems to be a cat right out of a Disney movie!

They were naturally born as a result of a natural mutation of the domestic Scottish cat!

They were born out of this rare gene mutation of the cartilage in their bodies.

As a result of this mutation, their ears got the folded appearance. They are often called the “owl-cats.”

The super adorable, folded-ear cat, the Scottish Fold is every pet owner’s dream.

Three words that aptly describe a British Shorthair would be sturdy, independent, and calm.

Sturdy as in its physique, this is a muscular cat. Calm in its poise and character, British Shorthairs are level-headed patient cats. They will walk away in the face of conflict rather than losing their calm.

These cats will neither hiss nor attack their opponent even when provoked- a trait very rare in cats.

This tells us a lot about British Shorthairs, actually.

They are not your usual reactive, hyper cat. They don’t get angry easily. They have this solid personality inside that thick muscular coat.

But this also means that they don’t show their emotions a lot.

Don’t expect a British Shorthair to cuddle with you or stay in lap for even a short time.

This is what you need to know:

They are loyal and affectionate, but they value their me-time.

While this is an extraordinary trait because you don’t need to keep them engaged all the time or worry about them, it also has its side effects, if you will.

This breed is ideal for pet owners who aren’t home the whole day.

But they tend to get lazy.

A British Shorthair can spend the whole day lazing around in their own favorite spot without moving at all.

This can lead to some serious health problems. Obesity is quite common in neglected British Shorthairs.

The solution to this is pretty simple, though – just find time to engage your cat in interactive activities at some point during the day. This will be your British Shorthair’s exercise!

The Scottish Fold – The Affectionate Extrovert 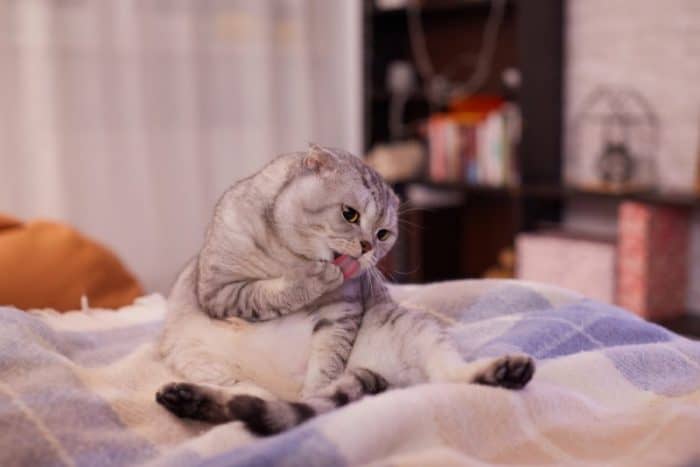 Scottish Fold is a dream cat.

It is affectionate yet calm, loving yet not clingy.

Unlike the British Shorthairs, Scottish Folds love to cuddle!

They are your little cuddle buddies who stay light years away from drama. Just like the British Shorthairs, Scottish Folds are neither very reactive nor violent.

Here’s the thing about Scottish Folds:

They have an extroverted personality.

They love hanging out with a crowd of people, they loved being picked up and cuddled, and they are one of the most affectionate cats you’ll ever encounter.

Just like they give attention and so much affection to their owners, they expect the same back.

Your Scottish Fold will actually get depressed or sick of it is left alone for long stretches of time. You have to set up a certain time for them and their playtime if you want to avoid that.

British Shorthairs are ideal pets for households with kids and pets.

This cat is unperturbed most of the times. You never have to worry about your kids when they are around British Shorthairs since they are calm and remain very patient throughout almost any situation.

Same goes for other pets as well, especially dogs.

British Shorthairs have no problem mingling up with dogs after they are properly introduced or ‘bonded.’

So, again, an ideal pet for families with other pets and/or children.

Scottish Folds are the dream pets for any family.

They are calm, love to play, and shower you with affection – you are their cuddly-buddies!

One thing that you should be mindful of is that your children must know that this is a cat that they are playing with and not a toy, kids can easily hurt the cat.

Same goes for dogs too:

Scottish Folds get along pretty well with well-trained dogs ( dogs that have received a proper amount of socialization).

Looking After a British Shorthair

British Shorthairs are low maintenance cats. You don’t really have to do any extra rituals for this cat; it just has the usual cat needs. Nice food and water dish, a litter box and some attention, that’s all a British Shorthair needs.

You just need to brush its teeth and coat every week and clip her claws every other week. That’s pretty much all your British Shorthair needs in terms of physical maintenance.

Emotionally, a British Shorthair might seem detached, but its feelings run very deep.

These cats are extremely loyal and loving.

Since British Shorthairs are quite independent, they don’t really need you to pamper them at all times.

You just have to arrange for some interactive games for your cat in order to pull it out of its laziness and eventually health problems.

Looking After A Scottish Fold 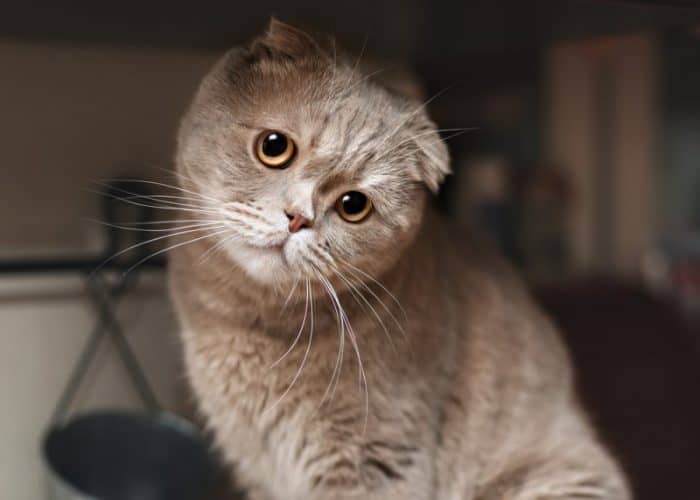 Very much like the British Shorthairs, you will have to groom your Scottish Fold every week and clip its nails every two weeks.

Scottish Folds crave attention, however. Unlike the British Shorthairs, they want to snuggle up with you, sit in your lap while you stroke their back .. the list goes on.

You need to know this:

Scottish Folds are certainly not as independent as British Shorthairs. They either need you or another pet-friend to share their day with.

They want you to shower them with affection and play with them at least for some time during the day, so this can be a little challenging for people who have long working hours.

But then again, you can’t expect to have a pet that you can conveniently forget about. A pet is a responsibility; you have to take care of it, both emotionally and physically.

Here’s the thing about Scottish Folds:

They tend to develop a certain degenerative joint disease as they age.

You must be on the lookout for the signs and symptoms of this disease while grooming your Scottish Fold.

Do all British Shorthair cats have orange eyes?

The prerequisite for a British Shorthair to be a show animal is that they should have deep orange eyes.

Scottish Folds are very affectionate cats, and they absolutely love to cuddle! This is actually a Scottish Fold’s way to show its love and affection. If you are at work for long hours, be ready to be showered with cuddles as soon as you enter your home!

Deafness is a health problem that is usually associated with the Scottish Fold breed. For a long time, this perception has been stuck with Scottish Folds that their folded ears are the cause of their deafness.

However, the actual reason for their deafness is proven to be their genes associated with blue eye color and white coat.

A number of blue-eyed, white cats have this health problem and so do Scottish Fold cats.