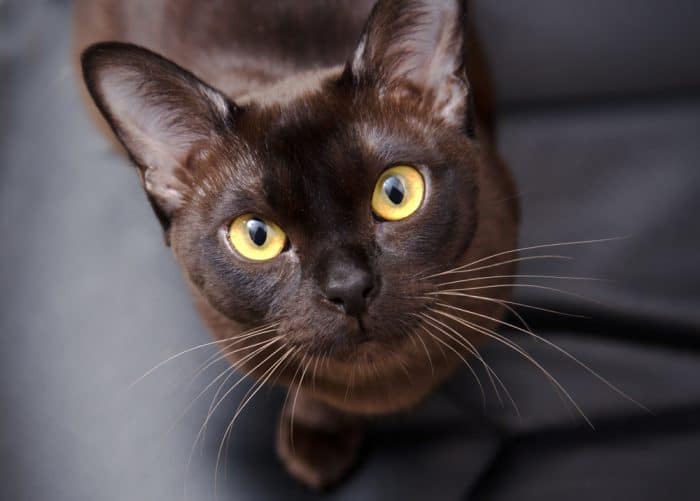 We have all been there. You are looking to get a pet cat but can’t decide which breed to pick. And after a lot of searching and fumbling around, you come down to these two.

Now the question is:

Should you choose a British Shorthair or a Burmese cat?

Well, to be fair I won’t tell you which one to get. I will tell you everything you need to know about these two breeds so that you can make an informed decision.

So without wasting any more time, here is what you need to know about the British Shorthair and the Burmese cat. 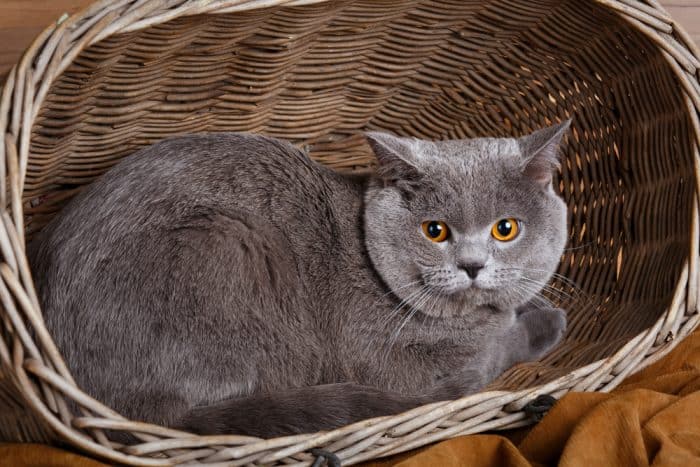 Let’s start with the British Shorthair.

A British Shorthair cat is a large, muscular feline. The cats of this breed are often larger and thus heavier than most other cats of the same age. The head is large and round with broad cheeks, small ears, and the characteristic short muzzle. The large, round eyes on the Blue Shorthair are copper in color. The eye color can vary quite significantly depending upon the particular variant.

While British Shorthairs are larger, they are of short height and have a stocky build with a short to medium tail length. Their coat is short but dense. In addition to being short and dense, the coat on British Shorthair is soft and smooth to the touch with a crisp texture.

When it comes to the lower body, the British Shorthair have a pretty solid skeletal construction. Though on the shorter sides, the legs are heavy and meaty with strong bones. The paws are round and are small compared to the overall size of the kitty.

Moving on to the Burmese cat, they have a body shape that is in stark contrast to the round, chubby looking body of the British Shorthair.

The Burmese cat is slender looking and has a long, lean body. Where the British Shorthair had a large rounded face, the Burmese cat has a wedged shaped face with large ears, almond-shaped eyes, and a long muzzle.

When it comes to the build, the Burmese cat has a pretty muscular body. They may not look it, but they are surprisingly heavy for their size, thus earning the nickname “Brick Wrapped in Slick.” Their legs are in proportion to their body: Long, lean, and muscular. The paws are neatly rounded. They have a medium length tail making the Burmese cat a medium length cat on the whole.

The coat on the Burmese cat is very short and has a satin-like finish. Unlike the British Shorthair, a Burmese cat has a pretty fine coat with a shiny finish. The natural colors include dark brown and chocolate brown.

Have you seen Garfield? What was Garfield like? Chill, loves food, loves human but not too much, loves to sleep, and being lazy in general. A British Shorthair is an embodiment of Garfield.

British Shorthair cats are friendly, amiable, and caring. They have a cool and lazy vibe which shows in their demeanor. They can get along with kids and other pets provided you introduce them gradually. When they are young, the kittens are playful. Adults of this breed don’t like to play that much and would prefer to sleep. But this doesn’t mean these cats don’t like attention or they don’t love their owners, far from it.

A British Shorthair will show its affection for you in its own unique way. It will follow you around the house, will keep an eye out for you, sit close to you and once in a while will jump in your lap. This is its way of saying:

I love you and don’t you dare confuse it with indifference.

In addition to being lazy, the British Shorthairs are somewhat independent. They won’t let you hold them or carry them frequently. Because of this independence, you can leave a British Shorthair alone for a few days without any ill effects.

If I were to describe the temperament of a Burmese cat in one sentence, I would say this:

A Burmese cat is a dog in a cat’s outfit.

When young, Burmese cats are as people-loving as a puppy. But unlike the British Shorthairs who lose their cheerful nature in adulthood, a Burmese cat maintains this people-loving attitude even when they are fully grown. These cats love to be petted and played. And just like dogs, a Burmese can be trained to play games like ‘fetch’ and ‘tag.’

Given that they are so friendly and playful, it is needless to say that a Burmese cat gets along great with kids and other pets. They have absolutely no problem adjusting to other cats, even dogs. This makes them a tremendous kid-friendly pet.

But this playful nature of the Burmese cats means they are entirely dependent on humans. This dependency makes them a bad choice if you have the sort of life which would compel you to leave your pets at home, alone.

Both the British Shorthair and the Burmese cat suffer from numerous health issues.

In the case of British Shorthair, issues like Hypertrophic Cardiomyopathy, commonly known as HCM, and Polycystic Kidney Diseases aka PKD are very prevalent. Both of these issues are genetic and are therefore inherited from a parent.

HCM is a condition in which a portion of the heart becomes swollen without any obvious cause. This swelling or thickness of the heart results in difficulty to pump blood. This can lead to a whole host of other issues including but is not limited to sharp chest pain, heart failure, and sudden cardiac arrest.

Just like HCM, PKD is also a genetic issue. It is characterized by the renal tubes in Kidneys developing cysts. The conditions result in complications like hypertension, renal failure, infection in kidneys, and in more severe cases, kidney failure.

Despite the issues mentioned above, the British Shorthairs are considered long lived cats. These cats have an average lifespan of 14-20 years. Members of this cat breed frequently live to be more than ten years old.

The Burmese cat also suffers from various genetically inherited disorders. These include Hypoklaemea, Diabetes mellitus, and an acute teething disorder.

In Hypokalaemia, is a condition in which there is a low level of potassium in the blood. This low level is often responsible for a slow heartbeat, which can cause cardiac arrest.

Diabetes Mellitus is more prevalent in European and Australian cats. It is like diabetes in humans where the body either develops a resistance to the insulin, or the insulin production is lowered, causing persistent high blood glucose levels. If left untreated, the condition can cause dehydration, weak legs, and even death.

Despite these disorders, a Burmese cat can live to be 14 -17 years old. This life expectancy is excellent, considering the number of possible genetic defects. 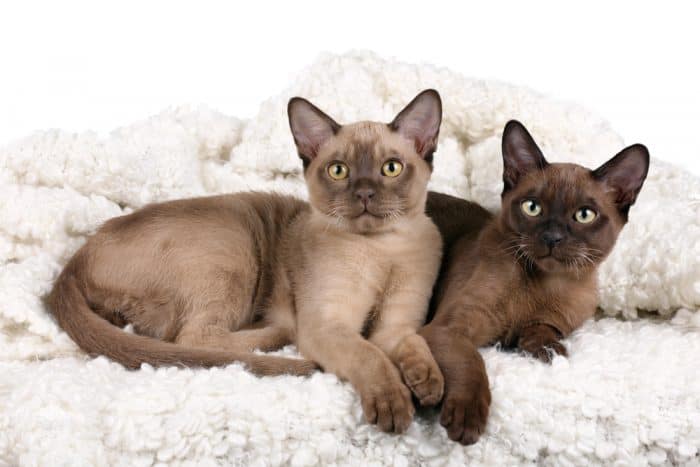 Starting with the British Shorthair, the chubby feline may seem oblivious to any contact, but it requires careful maintenance. Their coat may look short, and you may assume they don’t shed a lot. But contrary to your assumption, a British Shorthair sheds a lot owing to the density of its fur. So brushing twice a week is recommended.

Aside from brushing, British Shorthair can develop dental issues. In order to make sure that doesn’t happen, brushing the teeth occasional is a good practice.

Moving on to the Burmese cat, their short fur means very little grooming is required. Washing the Burmese cat from time to time get rid of unwanted particles and mucus buildup, which can cause eye infections. Get your vet’s advice on how often you should wash your cat.

A British Shorthair can grow to be as large as 14 inches in height, and male Shorthairs can weigh anywhere from 7 to 12 pounds. As a result, they are classified as medium to large in stature.

Burmese cats are not strictly indoor cats. They are playful and would love to roam outside. But this doesn’t mean they should be left to play outside as it can be dangerous for your Burmese.

Do Burmese cats get lonely?

Burmese cats are people loving. They are often described as more likes dogs than cats. And as you might already have figured out, you can’t leave the Burmese cat alone for a long time.