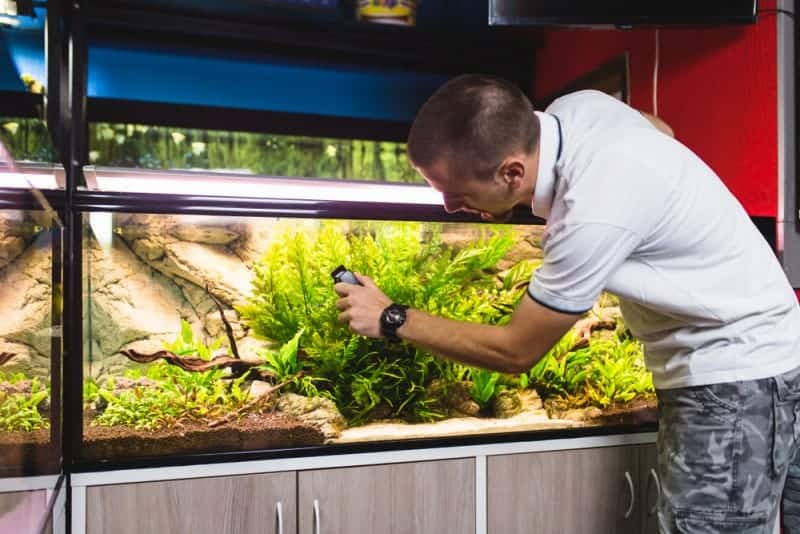 As a fish owner, I’m sure that the one thing you get to hear the most is the importance of keeping your fish tank clean to prevent them from getting sick. It is true that bacteria and debris can build-up in the tank, which is why regular maintenance is necessary. Otherwise, the fish may get seriously sick.

But, is the clean environment for your wish costing you your health? In some cases, yes, cleaning the fish tank will make you sick. The fish tank is full of bacteria, hence the need to clean it up. Some of these bacteria are bad for humans and lead to serious illnesses.

Should that restrict you from providing your fish with a hygienic fish tank? Not at all! Find out more about how you can balance your safety and the cleanliness of the fish tank by reading through this post!

Not all bacteria are bad.

In fact, some bacteria must be a part of your fish tank in order to keep your fish alive. One of these is the nitrifying bacteria. It is responsible for maintaining the nitrogen cycle in the tank. This nitrogen cycle is what keeps the fish tank’s environment non-toxic and healthy. The nitrogen helps break down the waste into lesser harmful chemicals. Similarly, there are certain bacteria that maintain the balance in the water.

Alongside these good bacteria are some harmful ones. Although they may not pose any threat to the fish, they can transfer to humans in the form of something very serious. The bad bacteria usually come from sick or hurt fish. For instance, if a fish is suffering from tail rot, there is a high chance that some unwanted bacteria have grown in the water. Moreover, Mycobacterium marimun is another common type of bacteria found in fish tanks in homes.

Salmonella brings forth a bigger risk of bad bacteria in the fish tank. Researchers have found that some cancer patients were affected by bacteria that traced back to their fish tanks. Some bacteria can even hurt humans if it is inhaled. However, in most cases, the bacteria only attacks if the cleaner had a cut or bruise from where the infection gets into the bloodstream.

In case bacteria from the fish tank attacked you, you wouldn’t be able to find out until it gets too late. Yes, I know that sounds horrifying. However, if you have a doubt that you may have been infected, there are a few red flags you can look out for.

One of the most common bacteria in fish tanks is Mycobacterium marinum. These bacteria are found in tanks that have fish with injured fins. Moreover, the transfer of these bacteria is possible by two means:

Right off the bat, if any of the above has happened, you should know you’re at risk. Even if you had no bruise or cut and none of the fish bit you, still beware if even one of the fish had injured fins or tail.

Mycobacterium marinum cause skin lesions. This is one of the most noticeable and prominent symptoms of the infection. But, the issue is that these lesions appear after two to four weeks of the attack. By this time, the bacteria have entered the bloodstream. These lesions are rather painful, but sometimes, they are completely painless too.

There is no other red flag that appears sooner. However, the infection is treatable even when the lesions are spotted. The complication that makes treatment difficult is the misdiagnosis. Since this infection is rather rare, doctors and patients misinterpret it to be a fungal or parasitic infection.

The most important aspect of treatment is the right diagnosis. If you know you recently cleaned your fish tank with a bruise or cut on your hand, or your fish bit you, let the doctor know. The sooner the infection is diagnosed, the quicker it can be treated.

More often than not, antibiotics are enough to clean the bloodstream. The skin lesions heal on their own once the bacteria are eradicated from the system. Minocycline, ethambutol, and clarithromycin are some of the common medicinal treatments used.

If the situation had gotten worse, antibiotics may not be enough. In such extreme cases, surgery is mandatory. This only happens in rare cases where the infection has gone too deep. It’s best to not let your infection get to this stage. If you clean your fish tank often, do not ignore the smallest of unusual symptoms to keep your health intact.

Despite the huge risks, you can never skip cleaning your fish tanks. It is your responsibility as an aquarist to keep your fish tanks in the perfect condition. But, that doesn’t mean you must risk your life for this. Here are some cleaning tips to make things safe and easy for you!

You should know the basic safety measures. These will minimize the risk of infections. The number one rule is to always wear gloves. Use arm length gloves every time since you’re usually dipping your entire arm in the fish tank to clean it. Secondly, never take a risk when you’re injured. Even if it is one small paper cut, postpone the cleaning or ask someone else to help you. It’s better to be safe than sorry.

Moreover, use the right tools. If you plan on cleaning off the algae, use an algae scraper. You can find different sizes and shapes in the market for easier cleaning. In case of deep cleaning, you’ll need a metallic scraper or razor blade to scratch off the tough stains. Be extremely vigilant with these tools. Also, keep the rest of the supplies, such as sponges and cleaning agents near you. This way, you wouldn’t have to dip your hand in the water again and again. Doing so can increase the chances of external bacteria entering the fish tank.

Do not overclean. This can remove the good bacteria from the tank, which may make your fish sick or kill them. Yes, overdoing and underdoing can both make the fish sick. Let the filter and gravel do their job for the most part. Only deep clean the tank once a month. As for how often to change the water, that depends on the size of your tank and the number of fish you own.

What fish diseases can be passed to humans?

There are a number of fish infections that can quickly transfer to humans. These include vibrio, mycobacterium, salmonella, campylobacter, escherichia, Aeromonas, and a few more. In case a human comes in contact with a fish that has any of these infections, there is a huge risk of a serious illness.

How do you disinfect a fish tank?

In order to disinfect your fish tank, you’ll need a disinfectant spray bleach. First, empty the tank. You’ll have to move your fish elsewhere. Next, wipe the tank clean before you spray the bleach on the entire surface. Let it sit for 10 minutes and then rinse it off. You can alternate the commercially available bleach for a DIY disinfectant if you have a recipe.

The term drowning means that water fills up in the organs that breathe in air. Since fish don’t have these organs, technically they cannot drown. However, the equivalent of drowning for fish is asphyxiating. This means that the fish suffocates due to the lack of oxygen in the water.

Why my fish die after I cleaned the tank?

Fish get accustomed to their environment. They are sensitive to the minutest of changes. Over time, the debris, uneaten food, and other remains alter the water. When you suddenly clean the tank and change the water entirely, the fish are unable to tolerate the sudden change. As a result, they either get sick or die.