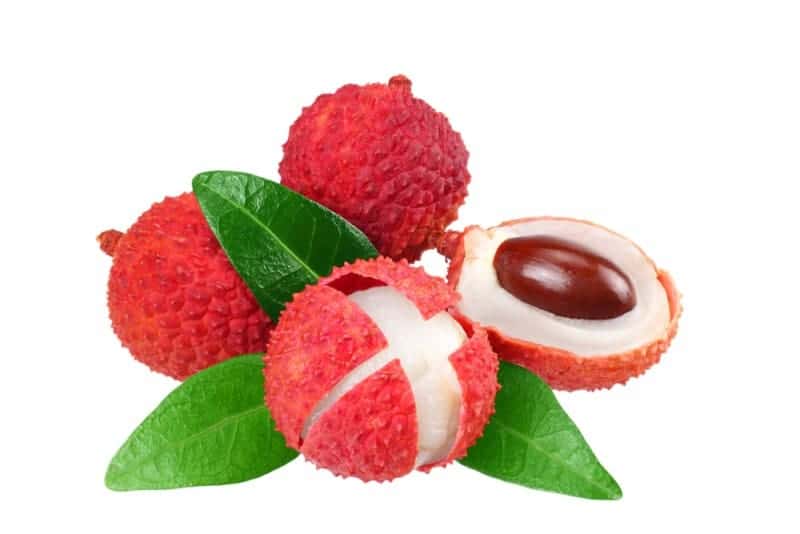 There is a huge variety of commercially available dog food. It comes in the form of kibbles, biscuits, and even wet preparations. Most of these have been designed keeping in mind a dog’s daily nutritional needs. There are even special feeds available according to your dog’s breed, age, and specific medical conditions. Most of the high-quality dog feeds are good enough to be used as the only source of nutrition for your dog. It is convenient, and you are sure that your dog is getting nothing but nutritious, good quality, safe food. I wish it was this simple with dogs though. Most of them eye your human food curiously and would sit and drool in front of you until you are forced to share your meal with them. It is always a good idea, however, to make sure that what you are eating is also safe to be shared with your dog, since some human foods can be overtly toxic for them. What about fruits? Specifically, lychees? They are sweet, succulent and irresistible, no doubt. But should you let your dog share some with you?

Based on my research, the opinion on this question is divided. Unfortunately, not a lot of scientific data exists to back up either side of the argument. Some say feeding dogs small amounts of lychee occasionally may be ok, while others strictly caution against it. I generally like to always be on the safer side of things. If enough evidence doesn’t exist to establish human food as safe for dogs, I would just not feed it to my dog. After all, there are plenty of other things out there that you can give them without being worried that they would get sick in the long run.

Some people, however, like to throw caution to the wind and experiment when it comes to their pets, and even children. Others argue that they have been giving lychees to their dogs and nothing has happened. Therefore, for the sake of a balanced argument, I decided to delve deeper into this topic. We will look into what exactly lychees are made up of, and whatever evidence exists when it comes to its consumption by canines.

What are lychees? What do they contain?

Lychees are a small, fleshy, aromatic, tropical fruit. Originally grown in China, they have become a popular food that is grown in warm tropical climates worldwide. Lychees have a very characteristic red outer skin that can easily be peeled off to reveal a white, translucent fleshy fruit. Inside the fruit is a brown ovoid pit. Over eighty percent of the fruit is water, the rest being mostly carbohydrates. Lychees are rich in vitamin C as well. Interestingly, there have been reported cases of children developing low blood sugar or hypoglycemia, vomiting, and encephalopathy (brain dysfunction) after Lychee consumption. This was found to be due to the presence of a compound called methylenecyclopropylglycine (MCPG) in the fruit, which can cause these symptoms in malnourished people. Now, the chemical itself is neither toxic to humans nor to dogs, and there is no available data on its effects in dogs, so I really cannot safely pass any judgments there.

It is recommended that even humans only contain Lychees that are ripe, since unripe ones can potentially contain toxins. Strictly speaking, no ingredients found in a Lychee are proven to be toxic to dogs, but I would still be cautious owing to the lack of scientific data.

If I do share Lychees with my dog, how much can I safely give?

While I have repeatedly been warned of caution when it comes to feeding lychees to your dog, I did not come across any case reports of dogs actually becoming very sick because of them. Maybe, if you really must, you can share a little with your dog. However, don’t give more than a couple at most, because they can still cause an upset stomach if nothing serious. Again, at this point, I would like to remind you that there is no available data on the long term effects -if any -of feeding Lychees to dogs, so I would recommend against making it a habit.

Is there any caution I should exercise while feeding Lychees to my dog?

As has been pointed out with other small foods as well, be careful not to give your dog anything that can potentially choke it. Make sure you don’t give it the whole fruit to munch on, or leave the skin and pits lying around in a place where your dog might be able to reach and swallow them. Lychees have very rough, inedible outer skins, and a pit that is big enough to lodge in the respiratory passages and block it. So, if you have decided to give your dog Lychees, peel them, remove the pit, and only give the flesh. Lychees are not meant to chew toys for your doggie!

Should I keep an eye on my dog after I have fed it Lychees?

It is always a good idea to keep an eye on your pet after feeding it anything for the first time. You never really know if their stomachs would be able to handle them. In rare instances, even foods that are not known to cause allergic reactions do end up cross-reacting in certain individuals. For this reason, monitoring your pet may be worthwhile. Whenever introducing a new food, keep the quantity small. While it is unlikely that your dog would show any symptoms after eating just a few Lychees, it may get a loose stomach at best.

I forgot to remove the pit from the Lychee before feeding it to my dog. What should I do now?

Well, if the dog is still fine, do nothing for now. Just be more careful in the future though. It may not always be lucky. As I said earlier, Lychee skins and pits carry a potential choking hazard, so you should be careful not to give them to your dog. You should also be aware of what to do in case your dog does start to show signs of choking. These include

You should be able to perform the Heimlich manoeuvre and once stable, should immediately rush your dog to the nearest pet emergency or vet.

Are there any long term problems that might develop in my dog if it eats Lychees?

Due to lack of evidence, I cannot really say yes or no to that. Logically, since Lychees have high water content, they wouldn’t really predispose your dog to problems like obesity or metabolic disorders. Whether any of its contents can act as slow toxins for dogs is yet to be found.

I cannot give a green signal, and I cannot give a clear cut negative answer to whether a dog can eat Lychees or not! A lot of vets say it may be ok for your dog to consume small amounts of the fruit occasionally. However, just do keep in mind that there is no available scientific data to prove that Lychees are completely safe for dogs to consume. At the end of the day, it all really does come down to you. If you feel comfortable sharing Lychees with your dog, do it. But be careful to peel off the skin and remove the pit before feeding them. Also, don’t make it a regular part of their diets. And if you’re anywhere near as paranoid as I am, just pick a fruit that is safe for dogs, such as bananas, de-seeded apples or berries. This way, you can pamper them and be guilt and worry-free too.

Contents show
Best Fruits for Dogs (Video)
What are lychees? What do they contain?
If I do share Lychees with my dog, how much can I safely give?
Is there any caution I should exercise while feeding Lychees to my dog?
Should I keep an eye on my dog after I have fed it Lychees?
I forgot to remove the pit from the Lychee before feeding it to my dog. What should I do now?
Are there any long term problems that might develop in my dog if it eats Lychees?
The final answer