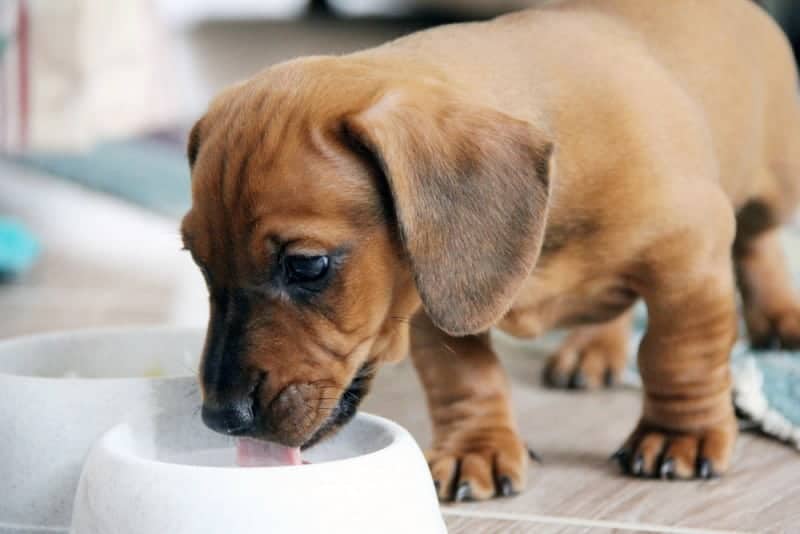 Let’s agree to this:

The idea of giving your dog almond or soy milk has popped in the head of every dog owner at least once.

And after reading the nutrition label, it would be pretty hard to convince you of otherwise.

But what if we told you, this idea doesn’t nearly sound as good as you think?

That’s what we’re going to cover in this article. You’ll get to know everything that’s necessary to answer this question, and by the end, you will definitely be ready to answer it.

So if you’re ready, let’s dig into it!

What Is Almond Milk?

Before we decide whether we should give our dog either almond or soy milk or not, let’s understand what these actually are and how they’re made.

To make almond milk, almonds and water are blended together to make a paste. This paste is then strained to remove the excess pulp, which leaves behind a smooth liquid, which is the base of almond milk. Most companies that make almond milk further process this almond milk by adding different additives, thickeners, preservatives to improve its shelf life and texture.

Some companies also produce almond milk in a variety of flavours such as chocolate and vanilla to improve its taste. This means adding further additives to it. Most of the types of almond milk available these days also contain a large percentage of sugar, although unsweetened alternatives are also available. There are also several DIY recipes to make almond milk on your own.

The reason why almond milk is flavoured so much is due to its low-calorie and low-fat properties. Almond milk is also free from lactose and high in vitamins and minerals. However, as perfect as it may seem for humans, it’s not even nearly as beneficial for dogs.

Most dog owners are involved in a debate as to whether they should feed their pooches almond milk or not. But is that really a good decision or not? Let’s take a look below:

Few people know this, but dogs usually become lactose intolerant once they pass the growing stage. This is because the production of lactase often slows down as dogs enter into their adulthood. Therefore, feeding them regular milk, which contains lactose, can cause diarrhea and vomiting in dogs. Because almond milk is a plant-based, it does not contain lactose and therefore can be easily digested by dogs.

Most dogs tend to love the creamy texture of almond milk, and many dogs also like treats made out of nut butter. However, if your dog consumes too much of these, it might cause problems with them both in the short and long-term.

It’s no secret that almond milk isn’t cheap. Because of the long process and time it takes to make almond milk, and considering the price of almonds themselves, a gallon of almond milk can cost a lot. Even if you decide to make it at home, just a pound of almonds can cost you around $4 on average.

Also, let’s not overlook the fact that keeping a dog already costs a lot in terms of buying dog food, regular vet bills, purchasing grooming material, and all that. If you add almond milk to the list as well, it’ll only further increase your expenses that you could have spent on something that’s actually useful to your dog. And if giving your dog almond milk causes diarrhea, your budget won’t be going lower anytime soon.

Firstly, there’s the fact that dogs don’t need milk at all. Only whilst their puppies need milk, and that too from their mother in order to grow. But once they pass that stage, their bodies stop producing lactase and they no longer possess the ability to digest it. Thus, milk is actually not a natural part of a canines’ diet, and feeding it to them will only do harm.

But since almond milk is lactose-free, some might argue that almond milk can prove beneficial to dogs. But the truth is that the nutritional value of almond milk to dogs is so insignificant that it doesn’t actually do them any good; except for costing you a lot of money.

More so, many of the almond milk brands are misleading in terms of ingredients, which can create problems on its own. First of all, almond milk doesn’t contain more than 2-10% almonds in total, with the rest being water. Secondly, it can contain a lot more than just almonds and water; ingredients like sugar and additives which are unhealthy for canines. Even if some brands claim that their almond milk is unsweetened, it will still contain preservatives and other additives.

Almond milk can cause obesity

One of the reasons many pet owners think giving their dogs almond milk is okay is because of its low-calories. But what they don’t know is that despite its lower calories, almond milk still contains heaps of fats, which can create a lot of problems, specifically obesity.

Almonds like other nuts contain lots of fats and many of those fats are transferred to almond milk when it’s processed. This high-fat content can over time cause obesity and diabetes in dogs. And if you’re already having issues controlling your pooches’ weight, almond milk will only worsen the case. Plus, if they’re already suffering from obesity, it’ll only increase their chances of developing pancreatitis.

Almond milk is not as nutritious as you think

Most people overestimate the health benefits of almond milk. While almond milk does have a few benefits over regular milk, it doesn’t really matter when it comes to feeding it to your dog. The reason lies in the process involved in producing almond milk.

When almonds are strained, they lost most of their nutritional value, and you’re left with milk that’s only half as beneficial as whole almonds or even less. Many people also consider almond milk to be high in protein, but the story is a bit different here too.

Most brands of almond milk only contain around 2% of almonds, the rest is just water and additives. This is due to the straining and filtering process, which greatly reduces the nutritional value of almonds, including the protein content.

From the above information, we can conclude the following:

Although it’s okay to give your dog almond milk in moderation, giving them too much too frequently can cause problems.

Always make sure that your almond milk is free from additives, and make sure it’s unsweetened. Keep an eye out for ingredients like xylitol and raisins. And never replace almond milk with a mother’s milk for puppies that are weaning. In our opinion, you would be better off giving your dog treats like beef treats and dog biscuits that are much more nutritious than almond milk.

What Is Soy Milk?

Soy milk is another type of plant-based milk that many dog owners wish to give to their dogs.

Soy milk is made by soaking soybeans and then grinding them to make a thick mixture. This mixture is then boiled and then filtered to remove any particles. Similar to almond milk, soy milk is also further processed with additives and preservatives.

Nutritionally, soy milk is comparable to cow’s milk as it is much nutrient-dense and healthier than almond milk. It has almost 3 times as many calories and 6 times as many proteins as almond milk. Soy milk also contains monounsaturated and polyunsaturated fats and isoflavones that reduce inflammation.

However, soy milk is still too caloric dense and usually contains too much sugar, which can harm your dog’s health.

So, is it really okay to feed your dog soy milk?

For that, we’ll have to go into depth again. There are both good and bad sides to feeding soy milk to dogs, just like almond milk. Let’s take a look at a few of them below:

As we discussed before, dogs lose the ability to digest milk once they pass their growing stage. Thus, a good milk replacement is plant-based milk; like almond or soy milk.

Isoflavones in soy milk have shown to have anti-inflammatory properties, and some evidence suggests that soy protein helps in reducing urinary incontinence in canines.

Although soy milk might have lots of proteins and other nutrients, there’s no hiding the number of calories it contains. Just a cup of soy milk contains almost 130 calories. Compare that to the number of calories a dog needs a day, which is usually around 25 to 30 per pound of bodyweight. It becomes pretty clear that soy milk will very soon start creating problems like indigestion and obesity over the long-term if given in large amounts.

Soy milk can cause allergies in dogs

Not all dogs take soy milk easily, as some might already be allergic to soybeans. If that is the case, you will start seeing symptoms like excessive licking, vomiting, diarrhea, and ear infections pretty soon. From this, it doesn’t seem like even testing soy milk on your dog is a good idea.

Soy milk can contain sugar and other harmful ingredients

Most brands of soy milk aren’t made keeping in mind the needs of dogs. They are usually filled with sugar, which further increases the caloric density of soy milk, making it even more unhealthy. But more than that, it might also contain chocolate flavoring or raisins, which are both toxic to dogs. Another ingredient, xylitol used to sweeten soy milk, can also prove hazardous to dogs.

You just want to make sure that it’s free from any toxic ingredients, and that your dog doesn’t have a persisting allergy to soy. Also, only feed them soy milk in small amounts as it contains a lot of calories. You definitely don’t want your dog taking up calories from milk which isn’t even providing them as much nutrition as they get from food.

We saw the good and bad in both almond and soy milk, and now you can easily take the decision of feeding it to your dog or not. If you’re still confused, it’s okay to feed your dog both almond and soy milk, unless they don’t have an existing allergy to either of them. Even then, we recommend you to make sure that your dog’s diet consists mainly of quality dog food and whole foods such as cooked meat, which provide them the nutrition they need.

1 thought on “Can Dogs Have Almond Milk or Soy Milk?”