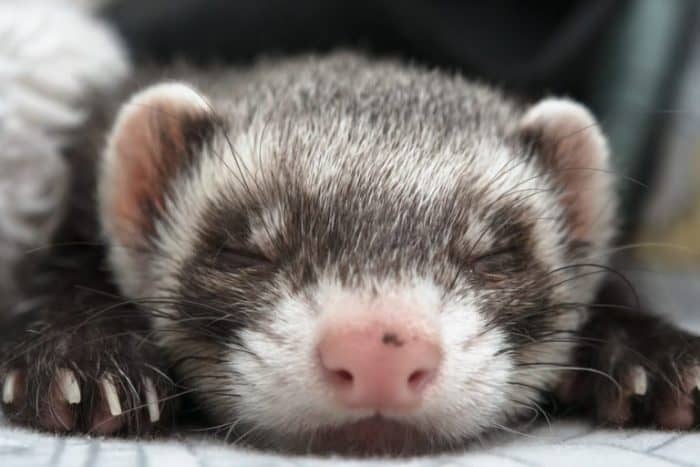 Ferrets may have the same or different nutritional needs from other pets basically, so some foods must be avoided for them to be kept healthy.

Can ferrets eat bones and dog food? They can be given raw, fleshy bones to keep their teeth healthy and clean, but they cannot eat dog food. Dogs are omnivores, so their feeds are made of a little-mixed amount of meat and more plant-based proteins and grains

They can eat grains such as corn, wheat, soy, or peas which are not at all fit for ferrets because of complex carbohydrate content.

Again, ferrets differ from dogs when it comes to nutritional needs and they have a short digestive tract. So instead of feeding them conveniently with dog food, it just might cause them deficiency, give them an upset stomach which may, later on, lead to severe diseases.

The Amount of Food for Ferrets

There should be a planned “menu” for feeding ferrets on a daily basis, but they should have a steady, and readily available source to sustain them whenever they are hungry (dry variety like ferret kibble, kitten feeds, or meat-based cereals).

Give them about a ¾ cup daily with a mixed variety of other foods such as fresh raw meat, cooked or raw chicken, mashed baby food (meat based), or egg dish (occasionally, preferably once or twice in a week only). They tend to eat almost every 2-3 hours because of their short digestive tract, so a determined measurement per serving is advised.

Most readily consumable Ferret foods have a high-fat content which can be quickly perishable, so it is better to prepare it with enough fresh food but discard anything that is left uneaten within 1-2 days and always wash the bowl before refilling to avoid spoiling the new batch of food you will give.

A kit (juvenile ferret) can consume a bowl of food which is about the size that can feed adults for once in a week, but since they mature rapidly, their diet and appetite also change quickly. Some other studies see temperature changes may affect their appetite. Once the ferret feels the cold weather, they hibernate as other mammals do.

They might need an average of 34% muscle, 20%-30% of high fat from chicken or lamb (whatever fits your budget), fleshy bones, organs, eggs for raw diet, along with any readily available kibble, frozen day old chicks, or chicken liver (is among the cheapest, safest, and convenient foods for them).

Since dog food does not fit a ferret’s diet, you can use kitten feeds as an additional supplement instead, as it safer for them.

Dog food and cereals contain more grains and vegetable proteins which are not good for ferrets. So, in choosing dry food for your pet, make sure it has high protein and fat content in order to ensure nutrient absorption.

Mixed with any variety of raw food, the best and most recommended brands are Marshall Farms ferret foods or Drs. Foster and Smith Original Ferret diet feeds. For younger aged, either give it softened with clean, warm water or stock a little bowl of it dry in its cage to have something ready to consume if it gets hungry.

Ferrets have a very different physiological structure amongst other pets so to keep them healthy, pick the right foods for them.

Feeding them ordinary dog and adult cat foods are not safe because they are strictly carnivores, they have a shorter digestive tract span and they are unable to process some food contents like complex carbohydrates, fiber, and vegetable proteins which can later on cause them severe digestive, pancreatic, liver and kidney disorders.

Ferrets are playful and tend to steal things which can be harmful to them.

Like if they live with other pets such as dogs or cats, your ferrets might steal dog or cat food which can be dangerous if ingested in high amounts without you noticing it. In case this happens, feed them fatty foods right away to help them easily flush out everything they took in especially the fibers and carbohydrates.

If you notice your pet ferret acting strangely after all these, seek veterinary consult right away. But to prevent incidents as such, better separate them from your cats and dogs, especially during their feeding time.

When ferrets get sick, before administering synthetic drugs for treatment, some important factors should be considered first.

You must specifically determine which organ system or parts are affected if the infection could be chronic or acute, what may have caused the infection and its possible antibiotic counterpart, how much dosage is needed, and how often must it be given on a daily basis.

Most of the time, infections come from wounds that weren’t noticed, or sometimes caused by bacteria found in the foods they ingest. Antibiotics are easier given through mixing them in food or injectable as it is a bit harder to give them orally in pill form. While for infections in the skin, topical antibiotics are alright provided that its ingredients do not cause dysbiosis that may harm the pet.

If you choose antibiotics which are mixed with their food, be sure to consult the vet to provide your pet ferret with bactericidal ones and those that do not cause other deeper problems such as gastrointestinal diseases like ulcers, digestion blockage or intestinal bleeding.

Specific Drug Branding That is Ferret-safe

Quinolones, such as Enrofloxacin, are the safest tested and commonly used class of drugs in treating Ferrets as they are safe to give either orally, intravenously or injected intramuscularly.

It is the most effective one to battle against Pasteurella and some other gram-negative infections using oral penicillin can cause , so it is best given injected to be safer, but with caution to patients with urinary tract infections.

Do not use aminoglycosides as they are proven to be potentially nephrotoxic to ferrets. Metronidazole is used for anaerobic infections, but incidents of anaerobic infections in ferrets are mostly just isolated, so the use of this drug is actually uncommon to other infections except waterborne.

Determining side effects is yet unknown this time, so a new concept in drug administration to ferrets is developed which is called the “pulse therapy.”

Pulse therapy involves once a day drug dosage rather following the timeframe for humans and other bigger mammals which is to give multiple dosing. Any drug that is effective in pulse therapy has a “post-antibiotic effect” which means they are still effective even after the concentrations in the body system decrease. Most probably, it should only be given at a high dose for a limited time only.

Is Dog Food deadly for ferrets? Yes, because it doesn’t fit their nutritional needs as it has contents that they cannot digest plus most of it are solid with complex carbohydrates and fiber because of grains, not enough taurine and it has amino acids that can make them sick, thus leading to fatalities or death.

What else might happen if they ingest high amounts of dog food? It can affect your ferret’s heart health (can cause cardiomyopathy), leading to congestive heart failure, affects proper eye function, and other severe digestive and excretory tract diseases and blockage.

How much does ready to eat ferret kibble/ feeds cost? Cheapest brands range cost at least $11, while premium grades cost up to $30. Always remember to variate their food menu and mix or intervene it with fresh raw meat, fleshy bones or cooked chicken and other food for carnivores to keep their teeth clean and digestion healthy.

Can they develop allergies from food? Yes, whenever they start vomiting it means their system rejects the food content. So to be safe, always variate their food groups daily, meaning do not give the same food every time!

Can I feed them frozen food? Yes, as long as it is purely frozen meat! Not fish, not vegetable or fruit, but exclusively meat! Frozen day-old chicks or mice available in pet stores are a good and cheaper choice and of course safe enough for their consumption.