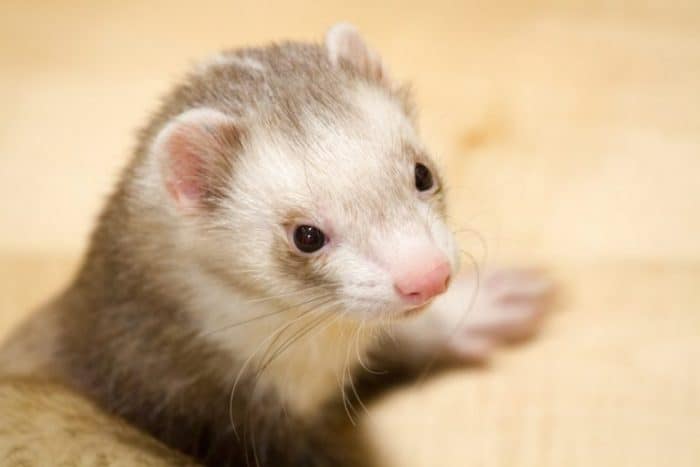 Ferrets have a specialized nutrient need, making them highly sensitive to some other kinds of food which could be specifically safe to humans or other animals but might not be as safe to them. Always be extra careful to ensure your pet ferret’s overall health in good condition.

Can ferrets eat honey and sugar? Partly yes, but not really! They cannot because their system does not process anything sweet and it can be really harmful to them and their short spanned digestive tract. But sugar has one important use for them in allowing ingestion; when ferrets are insulinemic (insulin deficient).

Honey can become a first aid when they have seizures put a little amount on their gums to stop it and immediately give it meat right after to flush the little amount of honey faster. Generally, too much of anything sweet and sugary is bad for them.

Let’s learn more about that…keep reading the article to know how to provide your ferret with a proper diet!

Honey can be given as first aid to calm down insulinoma symptoms of ferrets. Rub a small amount of honey or Karo syrup on their gums to be absorbed by their mucous membranes when they suffer a hypoglycemic shock, coma, or if the ferret is unable to swallow. But if it is at least conscious and able to eat, dilute the Karo syrup in a little amount of water to thin it and let your ferret drink some for it to be easily absorbed. Again, give it just small amounts because too much can be a cause of a bigger problem.

Insulinoma is a rare kind of pancreatic tumor common in ferrets. The pancreas has two main functions- to supply necessary enzymes for digesting food, and it supplies Insulin, the hormone which regulates blood sugar levels.

Both functions are applicable to humans and animals, and ferrets alike, but because ferrets have a special, and different dietary system from humans so not all that seems healthy to feed them, is good for them, like fruits, vegetables, grains, containing complex carbohydrates and high fiber, and anything other than meat that is either salty or sweet.

There is no determined cause of insulinoma, but most cases studied were monitored to be related to high complex carbohydrate and fiber consumption (for ferrets). The portions that malfunction when they suffer insulinoma are the ones producing insulin (called the islets) and the beta cells therein.

Once the cells go out of control, they produce abnormally high levels of insulin than what is needed and as they multiply (like cancerous cells do) they form raised lumps or nodules in the pancreas, and too much insulin causes their blood sugar levels to drop too low (hypoglycemia).

Visible symptoms include (late stages) slow and unclear thinking, inactivity, loss of appetite and weight rapidly, vomiting, they drool or seem to have discomfort in their mouths, rear leg weakness, and if their blood sugar drops very low they develop twitching and seizures which may lead to comatose or even death if left untreated.

Honey Used as Remedy for Dehydration

While duly observing your ferret’s behavior when sick of a low blood sugar level, a first aid that can effectively alleviate symptoms such as dehydration before taking your pet ferret to a veterinarian for rescue is to use a little honey, Karo or Linatone mixed with water (if it is still able to swallow or eat) as a drink to help heighten the blood sugar level rapidly then afterwards feed it with duck soup to help it regain strength

Considering Surgery for Insulinoma of Ferrets

The size of a ferret’s digestive tract is usually as small as a macaroni hole so anything that can cause blockage can actually be dangerous especially if the tumor is big enough to cause a major problem.

Giving it honey and other influx of composite refined sugars such as white sugar, corn syrup, maple syrup, or Karo with glucose or fructose can only help alleviate the symptoms of insulinoma in ferrets, but for severe cases where the ferret’s life is at stake, surgery is already advisable as an actual treatment to at least prolong the pet’s lifespan along with certain medication to follow afterward.

Not assured to fully cure it, as it may recur but worth a try as it is the only option. Success rates vary between surgeons and generally only about 50 to 60% of stories went well for at least 2-4 more years with a maintained post medication and long-term diet making ones pet-keeping very costly. Once you consider this, be sure that you are ready- financially morally.

This can help temporarily, as it can only cover the problem about their lowered blood sugar levels. You can also take this as an option for your ferret if you have a tight budget and cannot afford the costly rates for surgery.

Aside from the possible onset of the tumor, hypoglycemia (low blood glucose) is also a problem so medicines can help, though temporarily. Prednisone/ prednisolone (or corticosteroids), Diazoxide, Doxorubicin, or Octreotide can be administered to help regulate their blood sugar levels.

The liquid form of Diazoxide is used to treat hypoglycemia in humans while its injectable form is also used to control high blood pressure, but if used for ferrets, constant blood testing should be done to monitor possible adverse side effects (vomiting, loss of appetite, diarrhea, and weakness can be among occasional side effects) so that it wouldn’t cause more problems.

Just make sure that your pet ferret is able to eat as it undergoes drug treatment to at least help it regain its strength and recover faster.

Sweets That are Not Fit for Ferrets

Honey and sweeteners containing glucose and fructose are safe for ferrets provided that it is given with a controlled or a little dose daily or at least twice in a week just until their low blood sugar symptoms are lessened.

A high fiber and carbohydrate diet is not good for them so if you want to start training them while giving treats, make sure to avoid the following sweetened foods: sugary cereals, peanut butter, grains, rice, cookies, raisins, bananas, and other fruits, vegetables, dairy products, ice cream, sweet dried fruits, and chocolates. All of these are full of complex carbohydrates which they cannot digest.

So if you want to give them treats, you can give them offals (trimmings of meat) or meat-based baby food and scrambled eggs instead to be safe or stock honey in a small squeeze bottle and give a drop as a reward for it.

What Ferrets Eat Are Important

Ferrets with insulinoma still need to eat, just be careful with what you give them. Never feed them anything with a high carbohydrate and fiber content as it may aggravate their symptoms and lead to deeper sicknesses or even death.

Complex carbohydrates always have an effect on its pancreatic health so to keep your pet ferret in its top shape, feed it only with the best quality of meat products for protein and fat source.

It is still best to liken their diet as pets to their diet in the wild because they survive better and longer with it. Substitute rewards of sweets, raisins, or chocolates with offals (meat trimmings), liver, chicken hearts, other organs, meat-based baby food, or eggs as rewards or treats for your ferret.

Can ferrets have seizures? Yes, it can happen to your pet ferret as one initial symptom of hypoglycemia (low blood sugar level) and mostly in severe, advanced stages.

Can I give my ferret ice cream as a treat? Absolutely not! Dairy foods and products are toxic for them like milk, yogurt, cheese and even what they love which is ice cream, as these can cause an upset stomach, or be cancerous to them.

Can I give my ferret chocolate or candy as a treat? No, as too much sweet (containing artificial sweeteners) is bad for them. Chocolate contains theobromine which can excite its heart and cause abnormal heart rhythms. Take it away from them!