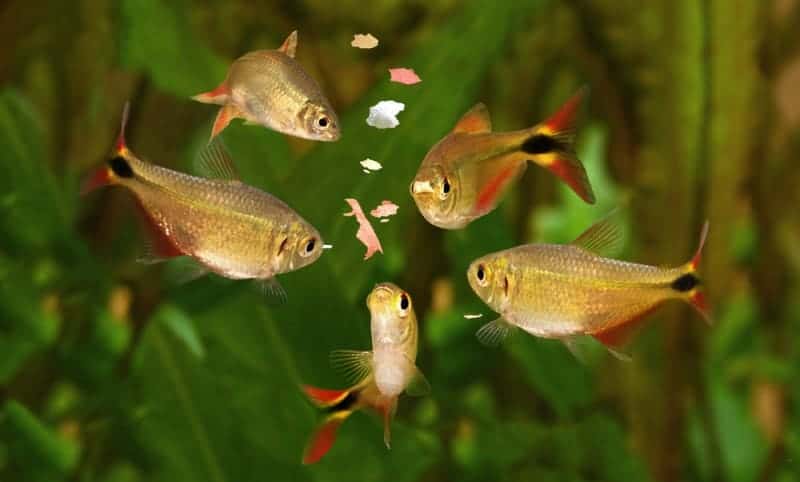 Is it normal that one fish eats other? Do fish eat other fish? What about other creatures like tadpoles, frogs, snails, and shrimps? Do fish eat these animals?

Well, here’s what I found out:

Yes, fish can eat other fish. Fish can also eat tadpoles, frogs, snails, and shrimps. Not because they’re aggressive and brutal but because their mouth, teeth, and digestive system are designed to do so. These are carnivore fish that are meant to kill and eat their prey.

Do fish eat other fish? (Video)

Eager to know more about these fish? There is plenty of detail that you should know before adding these fish in your tank. Also, there are various ways to stop a fish from eating its fellow fish and other swim friends. So, hang on and read below.

Do fish eat other fish?

So, whenever you see fish disappearing from your tank, then take notice and observe. There are many reasons, but one of the reasons might be a fish that eats other fishes in the tank. Again, the “culprit” fish isn’t cruel but it’s designed to do this act.

But sometimes, your fish might get aggressive and starts tearing, and eating its swim partners as well. This aggressive behavior occurs mostly due to territorial issues. So, beware when you add new fish in your tank, and if you find any fish going to this extent due to aggressiveness, then it is best to take it out of the tank.

The fish that eat other fish are actually carnivores, and there’s a specific term for this behavior, cannibalism.

When an animal eats the members of its own species, then it’s known as cannibalism. It’s common among aquatic environments where cannibalism is found in 90% of animals.

So, these bombastic fish that eat other fish are cannibalistic. If you’ve got cannibalistic fish in your tank, then you have to feed them just the right diet to stop them from eating their own fellows.

What to feed the carnivore fish in your tank?

Carnivore fish eat meat only. Some are lazy scavengers who kill and eat whatever comes their way. Others are more specific. Carnivore fish have big jaws, sharp teeth, and a shorter digestive system as compared to herbivorous fish.

Carnivore fish, like all other fishes, need a balanced diet. Their diet should consist of more protein, fats, and a minute quantity of carbs. In fact, carnivore fish’s diet should comprise of 45 to 70% of protein.

So, carnivore fish should be fed meat, including live animals. Live animals are fun to chase, and they contain all the nutrients. You can buy frozen love snails for your carnivore fish.

You don’t want your cannibalistic fish to eat away other fish in your tank, right? Read below to know about the ways you can fulfill the meal-needs of carnivore fish but not at the expense of other beautiful fish in your tank.

How to stop fish eating other fish in your tank?

In case, you have a doubt, that your carnivore fish is eating other fish in the tank, then you have to take steps to prevent this from happening. Because this environment in your tank won’t be suitable for all the fish and will lead to water contamination, territorial issues, and alike.

What you can do is, feed your fish enough frozen, live blood worms. You can also go for a combination of frozen, live, and cooked small fish. These fish are commercially grown for this very purpose.

It is very important to check your frozen, live bloodworms, and fish for any infection and disease. For this, you can keep them in a separate tank for a few days and see if they are active and healthy. After that, you can allow your fish to catch and eat their prey. This will teach your fish to only prey on these instead of their fellow fish. Infected bloodworms or fish can cause your whole tank to get infected.

Carnivorous fish don’t only eat other fish. Many other animals are also their favorite prey. Wondering which animal might become dinner for your fish in a fish tank or a pond? Read below for the answer.

Yes, Fish like bass and carp do eat tadpoles. If you have a pond, and there are tadpoles and fish, then it’s wise to use a fly mesh to separate the tadpoles. Otherwise, they can become a meal for fish.

Both fish and tadpoles can’t survive in one pond. The tadpoles of toads produce toxic chemicals that are offensive to fish and they don’t come close to it. So, toad tadpoles save themselves from fish in this way. However, the tadpoles of a frog would be definitely eaten because they aren’t toxic to fish. Even a Goldfish would eat all the frog tadpoles, as Goldfish is a pretty good hunter.

A great way to free your pond of tadpoles (if you want to), is to introduce some fish in the pond. The fish will eat away all the tadpoles. This is a natural and non-hazardous way to keep your pond clean.

Yes, some fish eat frogs as well. These predator fish include rainbow trout and 6 other species of Salmonids. These fish like to chase and catch their prey.

Obviously, these fish have big jaws and sharp enough teeth to tear and chew a frog. They are carnivores and thrive on the meat of other animals. Frogs are rich in protein and fats. That makes them the best food for predator fish.

Frogs are used to catch fish by the hunters. They find an area where fish are feeding and they throw the hook with a frog. The fish get trapped this way. Fishermen also use other prey to catch fish as well.

What about toads that are closely related to frogs? Do fish eat toads? No, fish don’t like to have toads for dinner. Toads secrete a toxic and unpleasant chemical that repels fish away. So, toads can live in a pond together with fish without any predator-prey relationship.

Yes, fish also eat snails. Some snail-eating fish include loaches, bettas, and Labyrinth fish. They can go deep into the substrate to suck the snails (using their tongue) residing there.

Snails can be found in your fish tank. They are uninvited guests that you sure want to remove. Their eggs or snails themselves come along with aquarium plants and fish. Once there is a snail or a few eggs, they will start to reproduce in your tank.

To get rid of these snails, you can simply add some snail-eating fish in your tank. These fish want to eat snail wherever it is. So, they will remove all the unwanted snails form your tank. Isn’t it a great way to get rid of them?

As shrimps like to live in the deep sea, they are often a great dinner for deep-sea fish and the fish who like to live on the ocean bed. Shrimps are very rich in protein, so they are very nutritious for your carnivorous fish in the fish tank.

You can feed your fish shrimps, but be careful not to overfeed. Fish don’t need to have many shrimps in one go. One or two shrimps would be enough. The rest of it can make water contaminated when they decompose.

Fish can be herbivores, omnivores, and carnivores. Carnivore fish like to be an active predator. Fish, that are meat-eaters, are likely to eat any animal and insect that is reachable as prey. Fish also eats other fish and this behavior is called cannibalism. Actually, fish can also eat frogs, tadpoles, shrimps, and snails.

Carnivore fish have large jaws, sharp and pointed teeth, through which they catch and tear their prey. The prey size depends upon the size of a fish. A small fish can eat tadpoles and small insects, while a large fish can eat small fish and other aquatic creatures.

Let’s address some of the questions related to this topic, in case you are eager to know more.

How to create a friendly habitat in your tank?

If you don’t want to have aggressive fish that can eat their fellow mates, then create a friendly environment. Don’t overcrowd your tank and keep changing the decor to eliminate the concept of territory-formation altogether.

Keep an eye on the activities of your fish. If they seem aggressive, just take out the aggressive fish and put it in another tank.

Another way is to introduce different varieties of fish in your tank. Different fish living together wouldn’t make territories and wouldn’t get aggressive as well.

What to feed your fish?

You can go for commercially available fish food, frozen live prey for carnivores, and scraps of food that is suitable for the fish.

Yes, herbivore fish only thrive on plants. Omnivorous fish also need some quantity of plants in their diet. You just have to beware of some plants that are poisonous to fish.

A few examples of plants that might be poisonous to fish are Aloe Vera, Yellow starthistle, and yew.

And what about fish eggs? It is highly unlikely that frogs eat fish eggs. The reason is that frogs like to chase and catch a living prey. Further, fish eggs are way too small to fill up their tummy.

Why some fish are fin-nippers?

Some fish tear and eat up other fish’s fins. They do so because they want food and they can anything and everything to satisfy their hunger. Another reason is that they are very aggressive and don’t want to share their territory.

Tiger barbs, for example, are the fish, that bite other fish’s fins for food or territorial reasons.