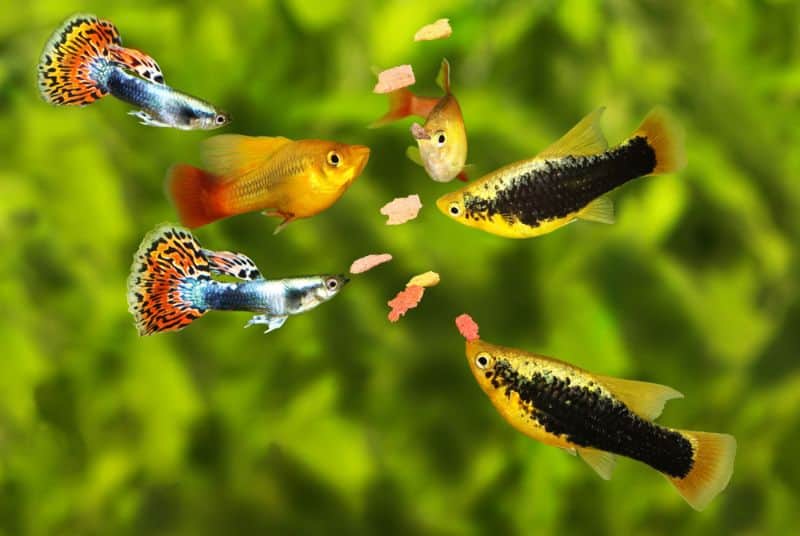 So, is it possible for Guppies and Platies to thrive together? Yes, as a matter of fact, Guppies and Platies can indeed live together as they are both hardy fish that can tolerate similar ranges of temperature, toxin, and water pH levels. Moreover, both these breeds are completely capable of living in absolute harmony with each other.

This article will provide the guidelines and explain the various nuances involved in keeping different species of fish together with specific focus and relevance to guppies and platies as tank mates.

In general, when choosing between dissimilar species of fish in order to form and sustain a community aquarium tank, there are a couple of noteworthy fundamental rules as listed below that you need look into in advance:

Now that we know all the basic guidelines for keeping any 2 species of fish together, let’s study the pair of platies and guppies in particular as potential tank mates.

Since all the basic requirements of guppies and platies overlap, you ought to do completely fine with keeping these community fish together. The thing is, you just need to make sure that other rudimentary requirements are not overlooked.

For example, you need to consider the space, that is, make sure there is enough room in the tank. Seeing as how they are both live-breeding fish and will, without a doubt, fill up the tank with babies quite rapidly, you need to ensure that the tank is large enough and is not too overcrowded before introducing new mates into it.

Male-Female ratio of guppies and platies in a tank

One would think that since Platies and Guppies are similar species that thrive in the same environmental conditions, you can just put them together in one tank regardless of the genders.

As a matter of fact, it is highly important to take into consideration the fact that both species tend to breed readily in close captivity. Therefore, you should make sure that there is a ratio of 1 to 3 between males and females of each species respectively. This way, there will be no issue of a male Guppy not being able to mate with a female one and similarly no issue for male Platies either.

The reason this poses a serious threat is that if a male of a particular species is not able to find a female of the same species, he will end up mating with a different species and, might kill it in the process.

If you haven’t figured it out yet, live-bearing fish are those that give birth to living, free-swimming young ones instead of laying eggs. In the fish world, the term live-bearer is generally used to indicate a particular category of fish belonging to the Poeciliidae family.

This class of freshwater fish comprises recurrent aquarium favorites such as Guppies, Platies, as well as Mollies. The minimum tank size requirement of these fish is 20 to 30 gallons.

Aquarium conditions tend to vary from species to species. However, in general, 64 to 82° F temperature and a 6.0 to 8.0 pH levels are preferred.  These fish are all omnivores and possess a peaceful temperament. Livebearers are all considerably resistant and, therefore, are quite a good fish for beginners.

They tend to breed readily in captivity. Primarily, there are four families of the live-bearers of which the well-known Molly, Swordtail, Platy, and Guppy form the largest group.

Perhaps one of the utmost pleasures of keeping this type of fish is the ease of breeding. Moreover, it is a bliss in itself to be able to witness the birth of a practically fully developed newborn baby.

Therefore, in terms of breeding, live-bearers are a highly preferred choice. These fish are not entitled to the same responsibilities as egg-layers when it comes to caring for their young since these babies can hide from predators on their own.

It is noteworthy that live-bearers usually do not have any maternal instinct and will eat their own babies after birth. This poses a lot of responsibility on the owner to keep the babies safe from their own parents and other adults. For this purpose, you should install a lot of plants in the aquarium which provide good hiding spots for the baby fish.

The females of the Guppies, Swordtails, Mollies, and Platies have a rather astounding skill where they can store sperm that is unused in their bodies for a time period of several months. The process is referred to as Superfetation.

The female can then give birth numerous times after having mated just once. Livebearers tend to produce only 20 to 40 young ones in one go, although a few may drop up to a 100 or more at a time!

Live-bearing fish are perfectly capable of thriving in diverse water conditions and also tend to do well in planted aquariums. As discussed previously, live-bearers are omnivores and, therefore, need both meaty foods as well as algae-based foods. For ensuring that proper nutrition is provided to the fish, you need to maintain a diet of the following:

Harboring a typical life expectancy of 3 to 7 years, live-bearing fish are considered to have a relatively long lifespan. This should be of particular interest to a majority of the hobbyists who want to witness the birth of quite a few generations of fry.

Live-bearing fish are relatively easy to care for and this can be owing to the fact that they provide a certain level of depth and dimension to fish keeping and observing them makes for a fantastic learning experience, not just for adults, but also for children in whom it can nurture a life-long appreciation for the fish keeping hobby.

What fish can you have with a guppies! (Video)

Which types of fish are compatible in the tank with the guppies? Platies are known to be one of the friendliest and the most peaceful fish out there to have in your tank. While they seem to bond with most of the species, guppies, on the other hand, are a bit specific. Apart from platies, the other fish that seem to do well with guppies include:

These fish will become good tank mates for your guppies if you plan on having them around. They are small, friendly and tend to fancy the same environment as guppies do.

What are the methods to find the compatible tank mate for the guppies? While guppies are smaller fish, they still require a lot of space to stay happy. For this reason, you would have to invest in a larger tank if you plan on keeping them around.  As the rule goes, there should be at least 1 gallon of water for every inch of guppy in your tank.

When making considerations about other fish that might be comfortable with guppies, you need to take into account the temperature and the pH value of the tank to decide which species would fit in better. For guppies the temperature lies somewhere between 76 and 80°F and a pH of 7 to 7.5. So, any fish that would comply with these conditions should do well in the tank with the guppies.