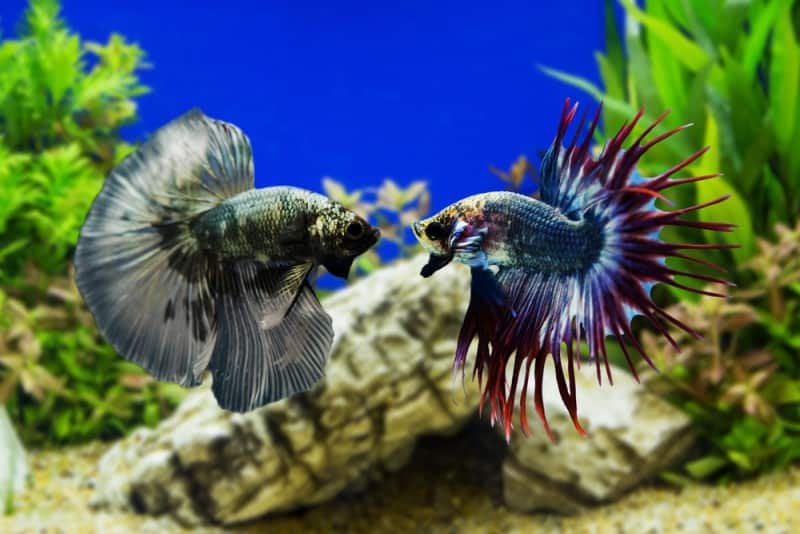 Having just one fish in the tank isn’t that exciting.

You need another fish in there to make the tank look more beautiful and give your betta some company.

But will your betta allow another tank mate in its tank?

Yes, you can place certain species of fish in the same tank as a male betta. It’s important to make sure that the fish you’re planning to buy can adjust to the same water as the betta. But if you’re planning on placing another male betta, get a larger tank.

But what are the exact requirements for keeping another fish with bettas?

Keep reading on to find out more:

Compatibility of betta with other fish

Male betta fish don’t have a very friendly reputation in the fish world. They’re known to be a very aggressive and arrogant species in the marine kingdom. Being a show fish that is really beautiful as well, they don’t like to share the tank with another fish.

Different fish of various species seem to go well with the male betta and adjust with them in the tank, but some of them don’t. The kinds of fish that male betta doesn’t like are tail-nipping fish, but there are some bright fish also with tail-nipping liked by betta as they don’t bother the male betta that much.

It is said that male bettas are aggressive with the other male bettas but can live with the species of other fish, both male and female. Tanks with more than one more species are usually called community tanks. In this case, the scenario includes a male betta fish and other species of the fish that can easily live with each other in a friendly atmosphere.

Bettas usually like to be alone in the tank so they can rest and sleep in their time without any disturbance or interference. Before adding a new fish to the tank with your male betta fish, there are some things to be taken care of such as:

So after taking care of all these conditions, you may place the new fish in your betta’s tank. It’s necessary to observe the fish after this for a while to check if they are compatible with each other and can live without getting stressed. If in case it’s stressful for the betta, he might need a new setup of his own.

Precautions with buying a new fish

Not another male betta

If you still want to do this, you must have a large tank with heavy plantation that could prevent the bettas from fighting with each other and end up dying. Male bettas tend to fight to the death, and when one of them dies, the other one would die in the upcoming days from the wounds and pain as well.

Male betta fish feel that the bright fish are a threat to them and might hurt them, so avoid getting fish with bright colour. Dull-coloured fish are still better and of other species as bettas would see them and ignore them.

Betta fish won’t see that fish as a threat but just a companion. The example of dull-coloured fish would be Corydoras Catfish. These fish are of another species and also dull colored.

No fish with flowing tales

Bettas are threatened by the flowing tail of another fish in water and try to attack it and kill it before it harms them. You must avoid getting fish like Guppies. Guppies are a kind of species in fish with a long tail and they are the ones mostly attacked by the betta fish when put in a community tank.

When to bring another fish

The best way to make the betta fish comfortable in living with other fish is starting from a young age. Bringing in the new fish when the betta is young works every time. This is because bettas aren’t as aggressive when young and are more accepting of other fish.

The betta fish as an adult is far more aggressive than the betta that is young. So bringing in the new fish with a young betta would work as they would grow up with them and get easily used to them.

It is essential to make the environment survivable for everyone, including the male betta, the new fish, the tank plants and everything else. Betta fish require a certain amount of pH in water as well as a certain temperature. If the other fish are not able to live in the same water conditions and with the marine plants, they would just end up dying.

Before getting another fish, you must check for the similarities in the requirements of the tank water to make them live together. In case the fish requires different temperature conditions, it can kill any of them.

This would also put the other fish in danger as the germs can kill them too. These factors should be taken care of to ensure the survival of both your fish and the marine life in your tank.

There are different kinds and species of fish. Some of them are perfect for living alongside male betta fish. These fish are small and don’t irritate the betta fish, so they can cooperate and live peacefully.

These specific species are the ones who have the same requirement as the male betta fish and can adjust in the surroundings easily. Some of the best matches for male betta fish are mentioned below:

The addressed issue of knowing if another fish can be put in the tank with male betta fish has been resolved. The male betta tends to have an aggressive behavior, but can still cooperate with the other fish.

Not every fish is compatible, but many fish are suitable for the betta to live with and if the betta is raised right, he might get used to living with them. The male betta does not fight with all the other fish, but only with another male betta or those with long tails as they consider them a threat to themselves.