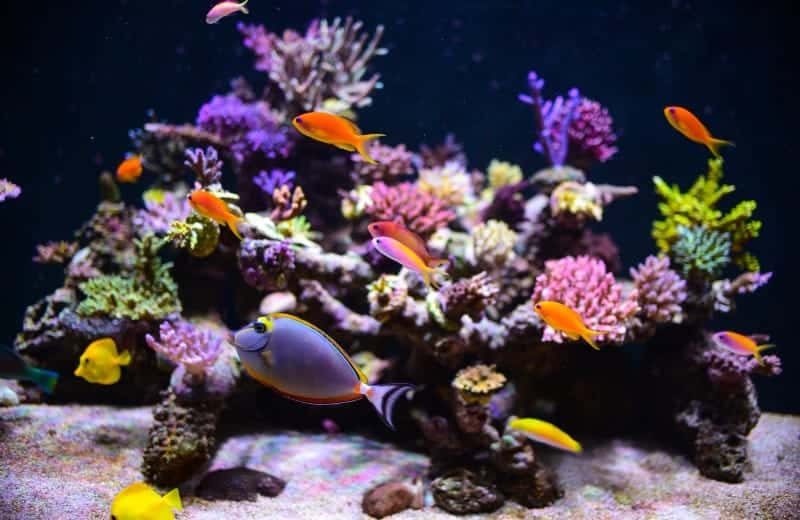 I couldn’t help, but remember all the poor fish I used to have as pets during my childhood. I would keep them in a clean water tank; watch over them; feed them three to four times a day, but none of them ever survived.

Fast-forward to today; I couldn’t help but pity my uninformed younger self. If only had I known, overfeeding fish was the actual problem.

In the following paragraphs, I will give you a detailed review of all the problems that overfeeding can cause, their effects on fish, and how to avoid them to provide better living conditions for our fish.

Why you should not overfeed your fish? (Video)

Why is overfeeding bad?

So, overfeeding is bad. But why?

Here are all the problems that occur when you overfeed your fish:

They don’t know when to stop

In the wild, fish don’t have a proper dietary routine. They can go without food for days, sometimes; even weeks. But when they do catch their prey, they have a habit of overeating because they don’t know when they’ll be able to catch their next prey.

On the other hand, aquarium fish are fed in a proper routine. But they don’t realize that and overeat. This overeating leads to dietary problems such as diarrhea or constipation.

Dietary problems result in a lack of nutrient absorption in the body, which is clearly not a good thing.

Overeating can also lead to hepatic lipidosis; a health condition in which the overeaten food results in a fatty buildup in the liver. Hepatic lipidosis is a serious condition that can result in death if not treated.

Another serious problem caused by overfeeding is the ammonia and nitrite buildup.

Overfed fish produce more waste than they usually would. This increase in waste is what creates the ammonia and nitrite spike in the water.

Moreover, when full, the fish leave the food, and this uneaten food starts to decay over time. This also increases water ammonia levels.

You might be thinking that you have a filtration system in your aquarium, so all is good. However, more often than not, the biological filtration cannot keep up with the high levels of ammonia levels, leaving your fish at risk.

Apart from feeding less, you can avoid this problem by changing the water regularly. You can also remove the waste and clean the aquarium to lower the ammonia and nitrite levels.

Now, there are certain fish species that aren’t bothered by acidic water, but there are also those that need water to be basic to survive. Moreover, water plants in the aquarium also suffer from acidic water.

There are pH adjusters that can be used, but sometimes, it is too late.

To increase the pH levels, you could add coral, limestone chunks, macroalgae, etc.

However, sometimes the water is too basic, so you might need to lower the pH levels you can add peat moss, almond leaves, or you can also use a reverse osmosis filter for the purpose.

The decaying of waste is an aerobic process. Meaning, the waste use a lot of oxygen to decay.

Due to this, oxygen levels are lowered, and it becomes scarce, causing the fish to suffocate.

Lowered oxygen levels not only harm your fish but also your plants, especially when the lights go out.

Overfeeding your fish results in organic waste, which results in algae growth. Most of you know from your High School biology class that algae strive on organic waste materials such as ammonia, nitrates, rotting fish food, etc.

Since overfeed results in an increase in these substances, algae are bound to grow.

There are several issues of algae in an aquarium. Firstly, they feed on the valuable nutrients that would otherwise go to water plants. Secondly, they don’t look aesthetic and cover a lot of area. Thirdly, they suck out all the dissolved oxygen, leaving little for fish and water plants to survive on.

Not only does overfeeding fish give rise to algae growth, but it also results in mold growth.

Dissolved organic waste on top of ammonia and nitrates are among the primary reasons why molds grow.

Mold growth is bad for fish because it is poisonous and uses up oxygen, resulting in lower oxygen levels.

Another grave issue that follows overfeeding is a disease referred to as fin rot.

Fin rot is known to consume the membranes of the fish’s fins and then slowly eating the rest of the body until death occurs.

Fish rot is quite a fatal disease, and its chances are increased especially in water that is filled with bacteria and other toxins.

We have already established that overfeeding fish renders a lot of fish waste and uneating food.

This uneaten food and fish waste eventually builds up to significant levels and ultimately clogs the aquarium filter.

But even before that happens, the filter has to work overtime using up more energy. This means that you will have to recharge the filter more often, resulting in more time, effort, and finance in the form of electricity bills.

And once the waste buildup is so much that the filter clogs, the water gets dirtier, and the toxicity of the water increases. And I don’t think I need to mention that such an environment is not good for your fish.

But, how should I stop it?

Now that you are aware of the dangers of overfeeding fish, you might be wondering what steps can you take to avoid it.

If that’s so, do not worry as we have you completely covered.

But before we go on talking about that, it is important to know when you are overfeeding your fish.

And for that, there is a simple way of knowing:

If you see a certain amount of uneaten food floating around in the water tank several minutes after you have fed your fish, that means you are overfeeding your fish.

Follow the following simple and effective steps to ensure that your fish is getting not more and not less than what is enough for it:

The first thing you need to do is develop a feeding schedule for your fish. Keeping a schedule is important because we often tend to forget whether we fed our pet or not, which either results in underfeeding or overfeeding.

Do not feed your fish more than two times a day.

So if you have a 9 to 5 job, you can feed your fish before going to the office and once after coming back. In this way, you’ll not only prevent overfeeding but also underfeeding.

It is hard to tell you the exact quantity of food you should feed your fish at a time. As a general rule of thumb, it is enough to feed your fish food that it can finish in two minutes or less.

To get a better estimate for a specific species, it is best to research the dosage on the internet or to consult a specialist.

Some hours after feeding your fish, you should check if there is leftover food floating around in the fish tank.

If there is, remove it with the help of a net. This will prevent uneaten food from decaying and creating further problems for you.

Don’t get baffled; I am not asking you to hire someone to clean your water tanks for you.

You should get some snails, catfish, or other similar aquatic creatures that are scavengers. Not only will they clean up all the algae and eat all the uneaten food, but they will also provide a complete aquatic look to your aquarium.

I overfed my fish, what to do?

If you or someone else overfed your fish, then refrain from feeding it.

Fish are cold-blooded creatures. It helps them survive without food for extended periods of time.

Leave the fish without food for a few days.

But if you are concerned that your fish will starve, you can lower the temperature of the water.

How to feed pond fish?

Some hobbyists keep a fish pond instead of an indoor aquarium for a more natural environment for the fish.

And in a different environment, the feeding should also be done a bit differently: