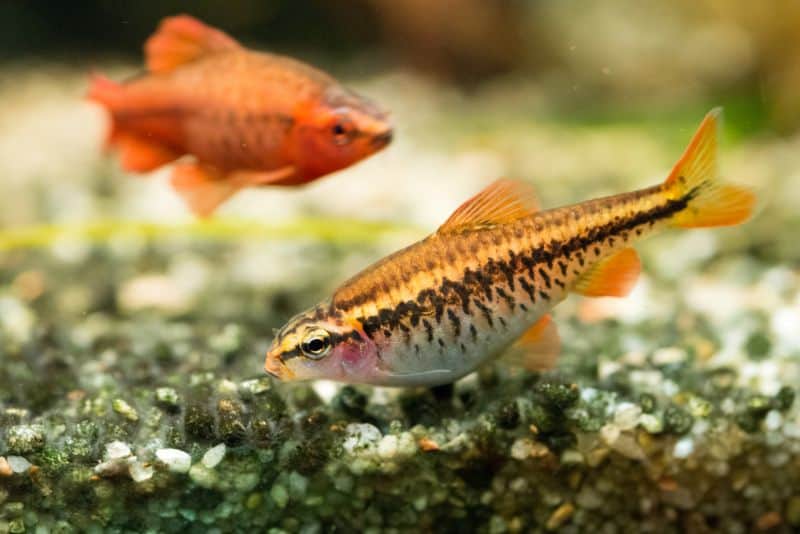 Seeing your fish with a bloated stomach can definitely alarm you. In case you’re looking for answers, you’ve come to the right place!

Bloated stomach in cherry barbs could be due to a simple issue like overfeeding or even a serious one like dropsy. You should increase their vegetable diet to improve the condition. Dropsy is usually a complicated issue as the root cause is difficult to detect. As there are no specific medications for it, dropsy can be fatal.

If the infection’s root cause is detected, the issue can be treated in time to fully cure the cherry barb fish.

Dropsy is a common cause as it is also known as stomach bloat. Cherry barbs or even any other fish may face this issue at any stage of their lives.

Sometimes, even if you take good care, dropsy can still appear due to no apparent cause. This should rather be taken as a sign that your fish’s health is slowly deteriorating and may keep going down till it dies.

This is basically the swelling of the abdomen. there can be many possible causes which include the imbalance of water parameters. This is highly important, especially for cherry barbs.

If the nitrites and ammonia levels are not right, your fish may face dropsy. This happens when these levels are raised even before the nitrogen cycle is finished.

If the water maintenance is weak, the pH levels may fall causing the same issue. Water parameters play a vital role in order to keep your fish happy and healthy.

Many other reasons can open the door to bacterial infections which are a cause of dropsy or bloated stomach. For instance

The worst part is that this is very difficult to diagnose. And if the real cause is not confirmed, the right treatment cannot be done. Dealing with an issue like dropsy is still complicated. Sometimes, the issue is only possible to discover if the fish is dissected and that means sacrificing the fish.

Dropsy occurs due to swelling when the fish is unable to regulate the fluid in a specific body part. In most cases, it is the stomach. Although, kidney, gall bladder, and intestines could get affected due to this problem as well.

This is why the chances of survival are often weak.

There are specific symptoms that can be seen to understand if the stomach is bloating or not. This is often done by physical examination.

You must closely monitor the physical changes in the body of your cherry barb. It will mostly seem like the fish is flaring up its fins. This is because of the swelling as the ends start to point outwards.

Moreover, a swollen belly is another major symptom to look for. It is very unlikely to give a successful treatment to the cherry barbs in such a situation where the organs have started to get affected adversely.

Expected reasons to inflectional dropsy/swelling may include:

These are the most likely symptoms that can be examined and noted down to be sure of the problem being faced by your cherry barbs.

Causes other than infection and dropsy may include overeating. This also includes a bloated stomach.

Bloated stomach is not a problem which cannot be addressed.

It is mostly caused when the owner overfeeds the cherry barbs or the fish eats a lot more than it requires. You must give the right amount of food to the fish to avoid overfeeding.

This can also be caused due to stress or discomfort. Other than that, poor water quality, wrong levels of water parameters, a sudden and a very low drop in the water temperature can also be listed as top reasons.

It is all about getting hold of the right diagnosis in order to prevent the cherry barbs from getting into the phase of dropsy and this is actually the trickiest part.

Mostly it is highly difficult to look for the symptoms until they are shown physically. Once they are obvious, it is already too late.

So, make sure you focus on the early symptoms, your fish might not be able to eat properly or it may avoid coming to eat when it is feeding time. Cherry barbs may also stay low in the tank. These are some important points which must be taken under consideration.

You must research well before you buy the fish and provide them with the best suitable environment. The right amount of ammonia, nitrites, and nitrates is highly important to keep your fish happy and healthy along with clean and hygienic water in the tank.

Is dropsy or swelling contagious? Swelling due to general issues is not contagious. It highly depends on what is the root cause behind it. If it is parasites and infection then yes, it is contagious. Otherwise, if the problem is due to overeating or stress then it might not transfer to other cherry barbs or other species in the tank. However, it is a known fact that if there is one dropsy-affected fish in the tank, chances are other fish will also face a similar issue sooner or later.

Is dropsy fatal? Yes. As there is no proper treatment for dropsy, it is often a deadly condition for the cherry barbs. If the problem is detected at a very early stage and treated by antibacterial medications, aquarium salt and relevant medicines on time, only then the fish can survive. But once the fins start to point outwards, it is nearly impossible to cure the fish.

What is a suitable diet for cherry barbs in case of stomach issues? You should always keep a balanced diet of your cherry barbs. If it is facing issues, then make sure the diet is right. You can give boiled peas or raise up the vegetable diet as sometimes a diet which is too high in proteins can also cause stomach troubles. For dropsy, you should use flaked foods. Make sure you use the food within a month after opening it.

The major things you should not do are keeping the affected fish and healthy fish in the same tank. You are advised to set up another tank and move the ill fish to that one for their required treatment. Make sure the water parameters are working right, the water is filtered and changed regularly and the salt treatment is also done right. If you are unsure, do not proceed with the treatment without consulting a professional vet. These issues can worsen very quickly so make sure they are treated in time.