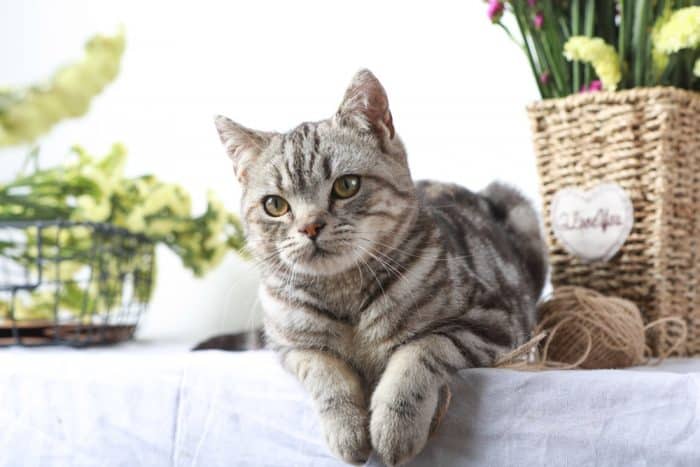 Owing to their incredibly endearing and intelligent persona, the American bobtails are peculiar both in terms of nature and cost.

However, their high price has been set on the basis of their exceptional character and looks which makes them stand out from all other cats.

Originating from the United States of America, the American Bobtail is a unique and a relatively new breed of cat as it first appeared in the 1960s. When a female Siamese was crossed with a short-tailed male tabby, kittens with tails of about one-half or one-third the length of a normal cat tail were born.

They had a distinctive bob-tail look and hence were named American bobtails. The shortened tail was a result of cat body type genetic mutation which affected the tail development.

The American bobtails have a stocky and muscular body with a distinctive wild look. Along with an athletic appearance, they have a broad, wedged face with almond eyes. Their ears are medium-sized with rounded tips and their hind legs are slightly longer than the forelegs. Their short tail may be straight or curved, usually ranging from 1-4 inch in length. In some cases, it may be knotted or may have bumps.

The shaggy fur of American bobtails comes in two different lengths, on the basis of which they are classified into two:

Shorthaired American bobtails have a double coat consisting of a hard outer-coat with a soft undercoat. The Longhaired bobtails have heavy hair around the neck, hind legs and tail. The soft textured coat of American bobtails comes in all colors and patterns. With coat colors, the eye color also varies. However, they do not have odd eyes like the Turkish Angora.

Cats are particular about their meals and timings. However, to raise a disciplined cat, you must set specific timings for your cat’s meals. It is preferable to feed twice a day for maintaining optimum health. Keep a consistent meal which has a fixed proportion of wet and dry food.
There are a number of things you can feed your American bobtail like:

The best choice for your cat’s diet is the packed high-quality cat food available in your vicinity. I feed my American Bobtails this delicious cat food by Purina and they ABSOLUTELY love this product. I’m honestly worried by now that they’ll get fat by having too much of it.

You can feed a home-made meal, too! Just make sure that the meat is boiled or cooked, boneless, and free from spices or salt.

All cats need care, especially breeds like American bobtail, which are entirely domestic cats and dependent on owners.

The basic tasks which are classified in care and grooming of American Bobtails are:

American bobtails have a variety of coats upon which the frequency and time of hair brushing depends. Generally, hair brushing should be done twice a week with a rubber curry or slick brush. Regular brushing keeps the coat shiny, clean, and hair ball free. American bobtails experience seasonal shedding in fall and spring so make sure you brush on alternative days during this time period.

Your cat’s teeth should be brushed preferably thrice a week to prevent the spread of any teeth problems or bad smell. To brush your cat’s teeth, you simply need to open its mouth with one hand and with the other hand brush in circular gentle motions. Remember to keep the cat toothbrush away from the gums or else it can cause injury and bleeding. Use feline toothpaste as it is edible.

A pet cat will never intend to hurt its owner but sometimes such accidents occur due to untrimmed and dirty nails. For nail trimming, use a cat nail cutter and gently press the upper and bottom part of the cat’s paw. The nails will extend, after which you can cut the pointed ends. Do not cut in deep as the nerve endings located there will get damaged.

Ear Cleaning is the easiest part of pet grooming and it has to be done once a week. Take a cider vinegar and warm water solution, 1:1 ratio, and moisten a soft cloth in it. Then slowly clean the inside of the ear. Do not use cotton balls and do not go in deep for it is dangerous. This will prevent infections or growth of termites.

American bobtails are naturally beautiful but they may lose their charm if they are dirty and may fall ill. Thus, you need to give them a bath once or twice a month depending on the climate. To bathe your cat, first wet it with some water and apply a good quality cat shampoo. Massage and then rinse it off thoroughly. Wash the head and face with a damp cloth. With a separate cloth clean the discharge from the eyes.

American bobtails are highly playful, sociable, and friendly cats. They are widely known for their stranger-friendly attitude. They demonstrate a warm welcoming behavior towards other humans and pet animals. This is why the majority of American bobtail owners have other pets in the house, too. These humble cats reduce the risk of fights between different pets.

Moreover, they are very obedient and loyal to their owners, hence they are also termed as ‘dog-like cats’. They demand great attention and time from their owners in exchange. They love being petted, groomed and played by their parents.

To further deepen your bond with your cats, take them on a walk. Use a leash and collar for this purpose. Being an adventurous and active cat, American bobtails enjoy exploring new places. If you prefer keeping them indoors then provide them with some interesting things like:

These will enhance your cat’s smartness and will occupy its curious mind. Also, they will prove to be exercising activities which will help in maintaining healthy muscles. American bobtail’s dominant characteristics can be summarized as:

There are three cat breeds that are quite similar to American bobtails. These are:

The American bobtails are a variant of the Manx gene pool. The Manx and American bobtails have similar body structure except that the Manx has no tail at all. Native to the UK, the Manx requires lots of care and is known to suffer from several hereditary diseases like corneal dystrophy, arthritis, etc. The Manx can give birth to tail-less, long-tail, or short-tail kittens.

The Pixie-bob have a thumb-length tail of about two inches in length. Just like the American bobtail, it has a muscular and athletic body. Its head is pear-shaped with hooded eyes.

Japanese bobtails only have a ‘puff’ or ‘pom’ of a tail. Their tufted pompom tail is no longer than three inches in length. Similar to the American bobtails, their tail can either be flexible or rigid. It has long and slender body structure with a silky and soft coat. The offspring of Japanese bobtails may contain kittens with either full-length tails or short tails.

How long do American Bobtails live? The American bobtails have a lifespan of about 11-15 years. Apart from the breed, there are a number of factors that affect the life span of an American Bobtail cat. These include health status, environment, and spaying and neutering.

In order to ensure a longer lifespan of your cat, provide it with a clean and hygienic environment. It’s advisable to keep your cat indoors. This is because indoor cats tend to live longer than outdoor cats as they are not exposed to parasites and ticks. Give your cat some exercise everyday and feed it properly. Also, spaying and neutering help to protect the cat from a lot of dangerous diseases (like cancer).

Do American bobtails have health problems?

Generally, American bobtails are healthy. However, like all other cats, they have the potential of developing or inheriting genetic diseases. Tail-less bobtails may have spinal problems. As a result of which their ability to control defecation may be affected. Therefore, one must take a written health guarantee from the breeder before buying an American bobtail cat or kitten.

What to if my American bobtail returns home injured? The very first thing to do is to deal with the situation calmly. Do not panic. Either call the vet home immediately or take your cat to the hospital. Do not feed your cat until you’ve visited the vet and prevent its physical contact with other cats, animals or children. After that, provide your cat with the prescribed medical treatment properly.