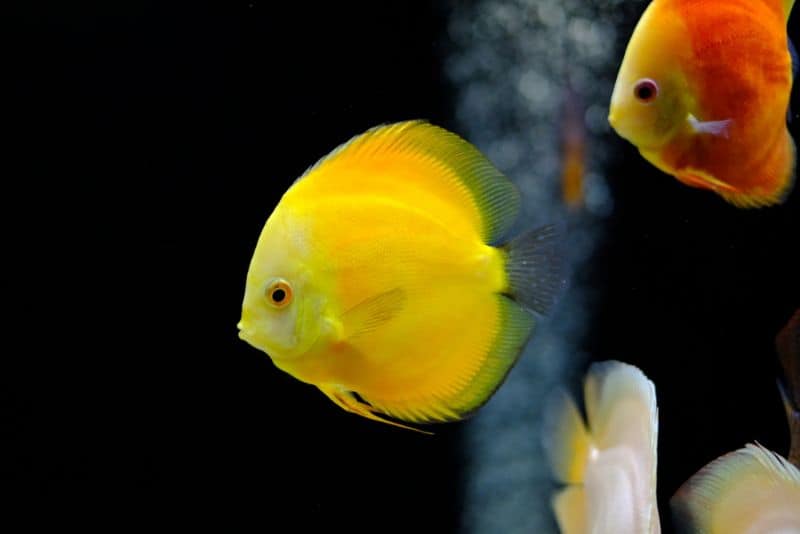 White to yellow stringy poop in the tank can be a sign of possible issues with your fish which should be assisted in time!

So, why is your discus fish’s poop white and stringy? The most common reason behind this is fecal disorders like parasitic infections. Discus fish must be instantly treated with antibiotics prescribed by a vet. However, if it is due to constipation, then you should feed the fish with a fiber-rich diet.

To find out more about how to distinguish normal fish poop from white and stringy one and its treatment, continue reading this article.

When a fish has an infection, the poop will turn out to be lumpy, yellowish or stringy white which hangs down from the rear of the fish. There can be a number of reasons for such poop; stress being one of them.

The major reasons of white stringy poop are digestive disorders and diarrhea. It does not matter what is the source of stress for the fish but what matters is the right diagnosis and treatment. If you diagnose it right, the root cause can be eliminated for good.

Stress can occur if the food is not right or if it is taken in large amounts. Another cause can be the changes in tank water. This might not sound like a big problem but in reality, it is.

Water is the main environment the fish live in therefore you need to pay really close attention to it. High level of chlorine and ammonia can also be a reason behind the stress. You should also keep in mind that the amount of light in the tank is also sufficient as too much brightness can also cause discomfort to the fish.

When the exposure to stress and discomfort is long-term, it turns into physical issues such as abnormalities in fish poop. You must maintain your fish tank regularly and make sure healthy environment is provided to all the fish.

There may also be an existing disease in the tank which might be causing uneasiness in the environment for the other fish.  Another important thing is to keep a check on the diet of the fish. Poop is highly affected by the kind of diet that goes into the body.

New food can also cause adaption changes and digestion issues. Vegetables and greens that are rich in fiber can be difficult to digest for the fish. If you really want to feed vegetables, then make sure they are nicely boiled before they are consumed by fish.

When the fish are infected by a disease, there can be many possibilities and causes such as internal parasites causing a stringy poop. These can be intestinal worms or intestinal protozoa.

When we talk about common intestinal protozoa, Hexamita always tops the list. However, there can be other causes too like Spironucleus. This is basically a disease which causes a hole in the fish head which leads to changes in the poop.  Roundworms and tapeworms are also common when the fish is having an intestinal issue. This also directly affects the shape and form of fish poop.

People often place new plants into the tank for the aesthetics of it. These plants may carry parasites which is how they spread among the fish already living in the water. Similarly, it can be spread by new fish entering the tank as well.

Some fish might have some internal bacteria growing inside them which make the poop go stringy. Such bacteria can affect the fish internally in many ways. This includes stomach bloating, dropsy, swim bladder infection, rectal infections, and many more. These types of bacteria can be treated easily with the right antibiotics given on time. These medicines should be prescribed by a vet and should not be tried on your own.

There can be other numerous reasons which must be diagnosed well for effective treatment by a professional.  Other reasons for stringy poop can be dealt with easily at home.

If there is a severe case of constipation, high fiber food can be fed to the fish but for a little while just for it to act as a laxative. Remember; when this treatment is being done, you should cut down on other food especially dried foods that come in frozen form. The ideal food for this time is tinned peas in a whole or a mashed form. Epsom salt is also widely known as a muscle relaxant which is mostly to treat constipation. Dosage should be suggested by a professional to be safe and effective.

For the issue of internal parasites, it is suggested to bring a change in the body of the fish. If only a change in the water is made, it alone will not be enough to treat the problem. For this, it is recommended to use Praziquental as it is an effective drug for many kinds of fish especially goldies.

You can also use anti-parasite food as it has similar characteristics. These parasites can be formed in any species whether it is goldfish, betta, discus or any other. What is important is that it is treated immediately before the entire tank gets infected. You should always look out for symptoms and get a hold of them in time to prevent any further spreading of the disease. If you are unsure about the disease, you must consult a vet for efficient and effective diagnosis and treatment.

These issues can be prevented by keeping a high-quality diet to prevent stomach bloating or constipation.

Diet plays a vital role in the poop formation of any species. Preferable plants to keep in the tank are Algae and clusters of aquatic plants.

Algae are famous for having cellulose but since it is not enough for the fish satisfaction, that is why other measures should also be taken. The option of keeping plants in the tank can prove to be very useful as it is a cheap but great food intake for the fish. The fish will gladly graze on the plants, keeping their digestive systems healthy too. Other green foods are also recommended to prevent digestion issues like tinned peas, spinach, blanched lettuce, thin slices of cucumber etc.

What is a healthy color for fish poop?

Fish poop should not be stringy at all. It should be in long segments but not as one long string. As far as the color is concerned, normal fish poop is dark in color. The poop color is basically just like that of other animals. If you need to diagnose stringy poop for your fish, all you have to look for is yellowish or white poop which hangs from the rear end of the fish in a long string.

Can a fish die due to stringy poop?

It is not always the case, however if the issue is left untreated, it can lead to fatal results. Some issues may have grown out too far which cannot be even successfully treated. It highly depends on the diagnosis and care afterward. You should always keep a check on all your fish in the tank to detect an issue at an early stage.

Is stringy poop in fish contagious? It is essential to understand the cause behind the stringy poop of the fish before deciding if it is contagious or not. If the root cause of the disease is a parasite, then it is highly contagious; other fish in the tank can easily catch it from the infected fish. You never know when a fish is already infected by another fish or a plant. These parasites grow and spread pretty quickly and should be treated right away to prevent other fish from getting sick.

What is the most common parasite which causes stringy poop? The most common parasite found in fish is Ich. Spot disease is also often linked with Ich parasite. This can be seen as white spots on the entire body of the fish mainly the fins, gills, and the skin. These parasites grow under the skin of the fish, triggering an internal infection. All freshwater species can be affected by this parasite.

Can we eat fish infected with worms? This is a question which is often asked by many. A simple answer to this question is not to eat fish with worms in raw or an improperly cooked form. Lightly cooked fish can also have effects similar to raw fish. These infections can transfer to humans as well. On the other hand, if the fish is well cooked, it can kill the bacteria and might be safe to eat. In some cases, even if a fish with worms is eaten, it may get easily digested, eliminating any risks. It may also depend on the immunity of the person who is eating the infected fish.