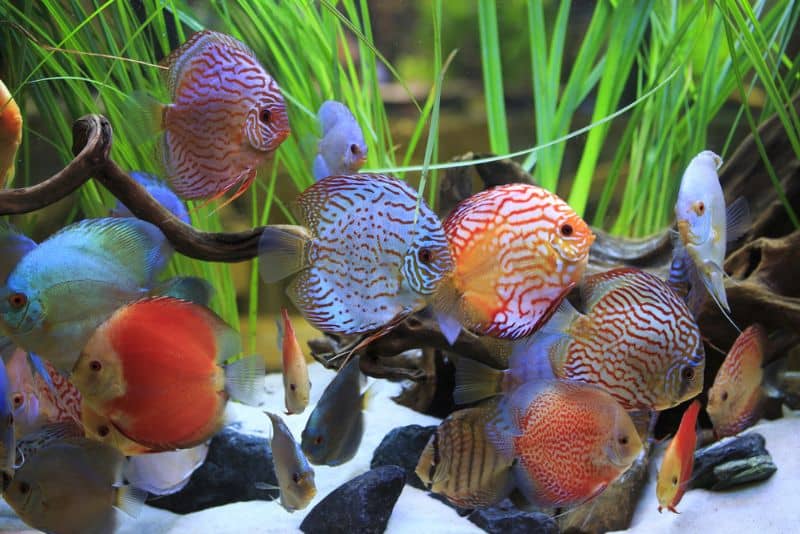 In a home aquarium, you might have noticed fish jumping out of the tank. This can kill the fish if you do not rescue it on time.

How to stop fish from jumping out of the tank? Fish jump out due to poor water quality, fighting with other fish, the absence of hiding spots, or stress. Precautionary measures like covering the aquarium with a lid and maintaining ideal tank conditions for fish can restrict them from doing so.

Before sharing some helpful tips to stop your fish from jumping, we need to acknowledge why a fish even shows this strange behavior in the first place.

Reason for jumping out of the tank

Following are some viable reasons that explain why the fish tries to kill itself by jumping out of the aquarium:

Fish need dissolved form of oxygen in the water to breathe properly as they lack lungs for the intake of gaseous oxygen. If the aquarium water is not capable to provide enough dissolved oxygen to fish, it might instinctively jump out of the tank in search of oxygen.

The lack of oxygen is caused by several factors.

First of all, if the tank is over-crowded then there will be a deficiency of oxygen molecules to fulfill the requirement of each fish.

The presence of algae inside the aquarium also creates a breathing problem for fish. Algae suck up a lot of oxygen and it literally suffocates the fish.

Even a minimal amount of ammonia can stress out the fish, eventually leading to its death.  The level of ammonia increases in water due to decaying food materials, fish waste, or decaying plants.

Sudden and extreme change in temperature

Fish are very sensitive to temperature changes. The maintenance of an ideal tank temperature is necessary for the survival of fish. If water suddenly becomes too hot or cold for fish, they will try to escape the aquarium in search of moderate temperature.

Aquarium fish breed very fast and you will find the tank filled with fry (baby fish) in no time. This results in overcrowding of the tank. Also, as an enthusiastic aquarist, the desire to own many kinds of fish is understandable, yet it does not justify overcrowding your fish tank.

This leads to many problems and if the fish becomes stressed due to less living space, then it will try to jump out of the stifling environment of the tank.

How to stop the fish from jumping?

You can make the conditions appropriate for your fish to halt it from jumping outside the tank and dying. Follow these instructions to save the life of your fish:

Make sure that the environment of the tank meets the requirements of your fish for a happy life. If the water is clean, the pH level is 6.0-7.0, and ammonia level is low, the fish will have no reason to look for better conditions. Along with the other parameters, temperature should always be kept between 82-86 degrees Fahrenheit for discus fish.

You should change the tank water on a weekly basis and install a filter which will break down the ammonia into harmless materials. Eliminate the excess food particles from the tank to prevent them from decaying inside as the decayed particles will contaminate the water. You can use beneficial bacteria supplements to clean the water naturally.

Small tanks are extremely unsuitable for discus fish as they are very active in nature. You should be able to provide them with a big space where they can swim around freely. Keeping fish in a small tank is equal to confining them in a suffocating environment.

So, you should get the right-sized tank according to the number of fish to keep them inside the tank. A general rule for discus fish is that each one of them needs 10 gallons of water. So, if you keep a group of 4-5 discus fish, you’ll need an aquarium with a capacity of roughly 50 gallons.

In the previous section, you studied how lack of dissolved oxygen molecules pressurizes the fish to jump out of the tank to breathe. If you wish to provide your fish with easy breathing conditions, then consider the following options:

Do not keep larger fish in the same tank with the smaller ones. The large fish will frighten the little ones by harassing and attacking them. It is very likely for frightened fish to jump out to save their lives but they have no idea that outside the tank, nothing but death is waiting for them.

So, aquarists should keep compatible tank mates together which can cause no harm to each other.

When the fish will have good choices inside the aquarium to hide and rest, then they would be less prone to jumping out. Honeycomb shaped aquarium accessories are very suitable for hiding purposes. If the fish is ever bullied or frightened, it will take refuge inside the hiding spots in the tank rather than jumping out.

Cover the tank with a lid

This is an ultimate safety measure to keep the fish inside the tank even when it tries to jump out. Do not forget to cover the tank after taking it off to add food.

Keep in mind that if your fish is trying to jump out, that is because of some disturbance inside the tank, identify the problem and try to eliminate it quickly, otherwise the other fish can die of stress.

Why does my goldfish keep on jumping out of the fishbowl? Goldfish usually jump out of the water if the water is not clean. But in the given scenario, the possible reason might be less space for the goldfish to live in. No matter how cute they look in it, goldfish do not like living in a fishbowl as it is usually too small for them.

Does a sick fish try to jump out of the aquarium? A fish that catches an infection or parasite can possibly show this behavior. A continuous itch on the body which cannot be scratched creates discomfort, and as a result, the fish might take an extreme step. You should isolate the infected fish in another tank and cover it with a lid until the fish gets cured. Otherwise, the infection can be transmitted to other fish.