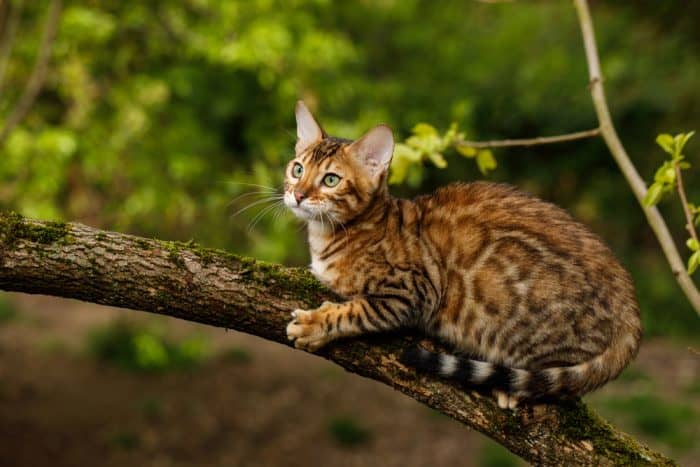 Bengals are popular particularly because of their leopard-like coats that are the result of a feral ancestry.

Most people still do not know much about these peculiar cats and their appearance.

Note: Tabby is not a cat breed, rather a coat type.

But the “M” is not the only distinctive quality of a Bengal’s coat.

If you have a Bengal cat, then be sure to read our Bengal cat checklist which contains our list of the top 20 products that every Bengal owner should have.

This article contains several astounding features of Bengal cats that will leave you in awe.

The majestic “M” on a Bengal cat’s forehead 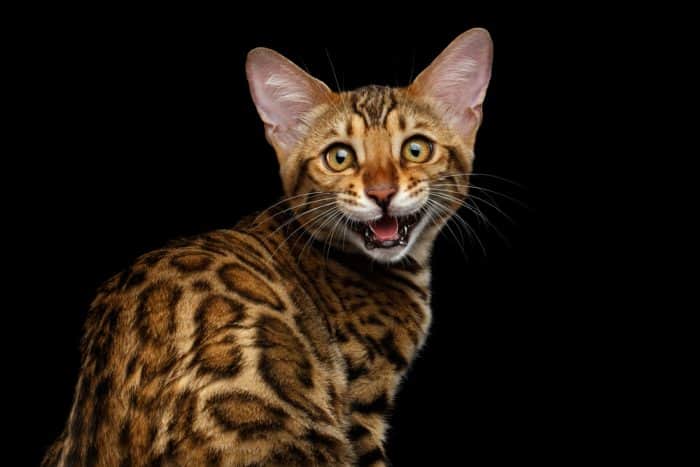 All tabby cats have an “M” pattern on their foreheads.

But here’s the deal:

This “M” is not just limited to Bengals but can be found on tabbies of other cat breeds as well.

It is important to note that tabby is a coat type known to have distinct stripes all over it.

Although all Bengal cats have tabby coats, not all tabby cats are Bengal cats.

Cats of other breeds can also have tabby coats; hence, they would also have an “M” on their foreheads.

The “M” stretches across the space between the cats’ eyes.

Dark lines are present across the coat of a Bengal that meet just above and between its eyes.

These dark lines stop just before the innermost part of the eyes.

And meet two angled lines on the upper part of the forehead.

Mostly, there are lighter lines contrasting the almost vertical dark lines of the “M” which add to its charisma.

Does a Bengal cat’s coat glitter?

If you don’t already know:

You’d be amazed by this magical nature of a Bengal cat’s coat.

Several Bengal cats are known to have coats that glitter under sunlight.

Not all Bengals are lucky enough to enjoy this trait.

Those who do, look spectacular.

It is like sprinkling fairy dust over your Bengal cat.

Especially with shorter coats, it is easier to notice but for others, it is harder to see.

Interesting fact: When a glittering Bengal was first shown in a cat show, the judges were skeptical.

They tried to rub off the glitter with a cloth, thinking it was artificial; a trick to make the cat stand out.

Types of glitter in a Bengal cat 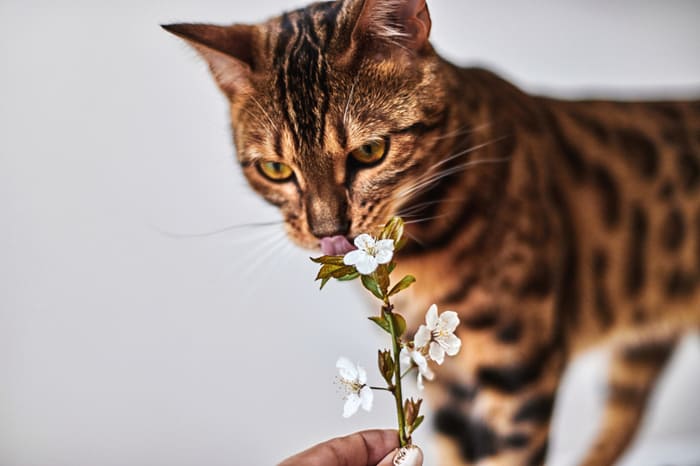 Fundamentally, there are two kinds of glitter:

Some Bengals have tiny reflective crystals on the tips of the hairs of their coats.

Some Bengal coats have hairs that contain tiny air pockets throughout their shafts.

These air pockets refract the incoming light and consequently, a glittering effect is produced.

These air pockets in the hair strands make the coat smoother and silkier than any other cat’s coat.

But, how does it happen?

It was believed that this “glittering coat” effect in some Bengal cats was because of a recessive gene.

However, recent studies reveal that it might actually be due to the presence of an accumulative gene.

An accumulative gene is a valuable asset to cat breeders because:

If you breed two Bengal with glitter, their offspring will have even more glitter than the parents.

According to Gene Ducote:

Early in their breeding program, they produced Gogees Warhawk.

Warhawk was the first ever Bengal cat to have the glittering coat effect.

It was so stunning and magical that people couldn’t believe it at first glance.

Warhawk was then bred with his sister.

Thus, began the legacy of the glittering Bengals.

Other physical features of a Bengal cat

Following are some of the standard physical features of a Bengal cat:

Bengals are medium-large sized spotted cats that have an athletic build.

An average male Bengal will weigh anywhere from 10 to 15 lbs.

A Bengal’s coat is one of its most prominent features.

Their coats are extraordinarily soft and shiny.

Bengals are known to have pelts instead of coats.

A pelt is more of an undercoat: a skin with short, silky hair.

Just like its coat, a Bengal’s color is one of its most distinctive features.

Most Bengals you’ll see will probably be brown spotted tabbies as they are the most common.

But a Bengal can be of other colors as well.

Although Bengals can have a variety of variations of these colors, Bengals with an orange tone in their colors are preferred.

Bengal cats have smaller heads in proportion to their bodies.

A Bengal’s head should be broad and slightly longer than it is wide.

Male Bengals also have wider jaws, probably thanks to their wild ancestry.

A Bengal’s forehead has a slight inward curve.

It has prominent cheekbones.

Bengals have big red noses that are also wide.

The big, oval-shaped, eyes of a Bengal can be of various colors, viz.:

A Bengal’s eyes are at a distance from the base of its ears.

Bengals are known to have small to medium sized, slightly round, ears symmetrical to the face outline.

Bengals have thick and muscular necks.

Due to a wild ancestry, Bengals are gifted with strong muscular bodies and strong bones.

Although Bengals have large bodies they are not as large as the largest domestic cat.

A Bengal’s legs are medium sized but have strong bones and muscles which make them excellent jumpers and climbers.

Moreover, the hind legs of the Bengal are longer than the front legs.

Due to which, a slight upward curve can be noticed at its back.

Bengals have thick tails that are medium in length.

All Bengal tails get narrower and end at a round, black tip.

Bengals have slightly round tummies which might fool one to believe they are overweight.

However, the truth is that most cats are known to have these slightly hanging bellies, especially Bengals.

These round bellies are due to a Primordial Pouch of the cat.

A primordial pouch is a feature passed on by the wild cats that has the following purposes:

By the way, Bengals with white bellies are generally preferred.

Is my Cat a Bengal cat?

Bengals are such spectacular cats that they gained sky-rocketing popularity as soon as they were officially recognized.

Many times, you’ll visit a cat shelter or an adoption center and find the representatives claiming that a certain cat is, in fact, a Bengal.

But how can you be sure?

Truth is there is no certain way of knowing if a certain cat is a Bengal or not.

Without a pedigree, breeding papers or documentation, there is no way to confirm.

One can only make an educated guess based upon one’s experience with Bengals and a thorough understanding of the breed.

To be sure your cat is a Bengal you’ll have to judge every aspect of it.

Be it the appearance, the gait, behavior, or personality.

How to distinguish between a Primordial Pouch and Obesity in a Bengal cat? One of the most prevalent problems in all cats, including Bengals, is obesity.

But, due to primordial pouches, it can sometimes be difficult to determine if your cat is getting overweight or not.

In order to differentiate one should know the following: