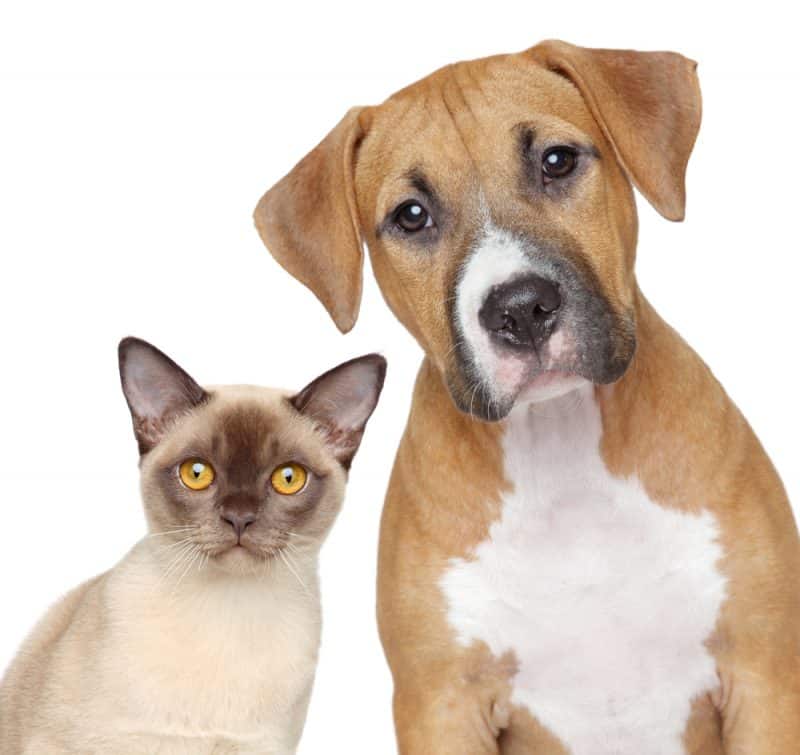 Tom and spike didn’t get along. Does that mean all cats and dogs are mortal enemies?

Well, in reality, many cat breeds get along well with dogs.

Are Burmese Cats one of them?

Yes, Burmese Cats are highly affectionate creatures that get along with all kinds of pets, especially dogs. The fact is that Burmese cats themselves are considered the dogs of the cat kingdom. These beautiful creatures are great additions to any household.

Burmese Cats are not just great with dogs they are also fantastic with other cats as well as children.

If you have a toddler in the house, Burmese cats are a safe choice. 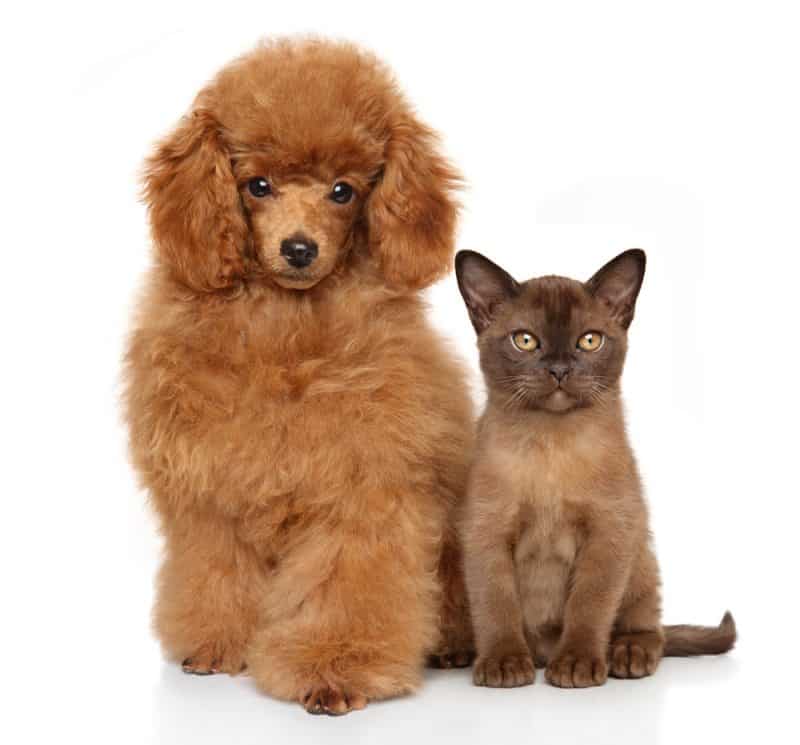 As I have mentioned before, Burmese cats are extremely loving creatures that love to be the center of attention. These felines will do their best to get involved in everything you do and will find ways to end up in your lap.

These amazing creatures consider their duty to keep you entertained, and if you are someone with a lot of time on their hands, then Burmese cats should definitely be your first choice.

Burmese are very active cats, and they love to play, and many cat owners have actually thought these fluffy creatures to play fetch. It’s like having a dog wrapped in a cat’s body.

With such a quirky personality, the Burmese cats tend to be very stubborn felines. Once they get fixated on something its very difficult to change their mind. They are very vocal, and they will make sure you know what they want. Hence, people who find the constant meowing irritating should go for a different cat breed. 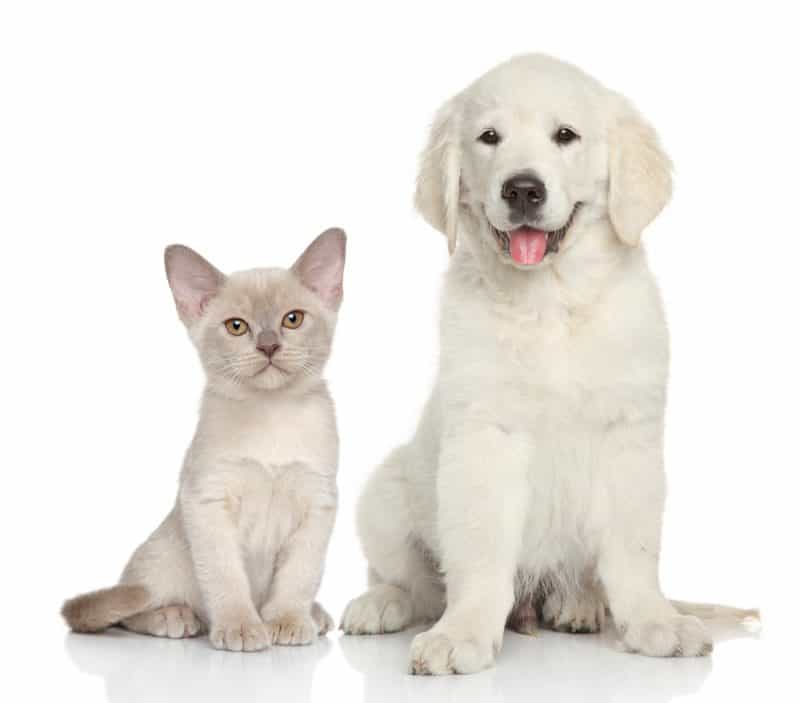 I honestly cannot stop myself from raving about this dog breed. Golden Retrievers are at the top of my favorite dog breeds and with good reason. Golden retrievers are not just great with kids, but they are also amazing with cats, especially Burmese Cats. These beautiful creatures know when to give their feline siblings some space and rarely get offended. These mild and playful dogs are great companions for Burmese Cats.

Pugs are incredibly adorable creatures that are to me, of the perfect size. Not too big and not too small. These bundles of fun easily accept any cat as their own, and they love to snuggle with their feline mates, using them as a source of comfort and warmth. If you have a Burmese cat, then Pugs are definitely the way to go.

These white balls of fur are a great addition to any household, and they are great with Burmese Cats. The best thing about them is their miniature size, as cats do not get threatened by them. You can often find these fluffy dogs chilling out with their Burmese friends and playing. The only downside with this dog breed is that they are really clingy, and this might be a little off-putting for some cats who value their personal space.

Labs are playful and gentle animals that, to be honest get along with all kinds of cats and pets. These are the perfect family pet and great with households with children. These cute canines are always ready to have fun and are super intelligent. They can be found bundled up with their feline friends or playing in the water. Burmese cats love to play with water, and labs are always ready to join in the fun.

Chihuahuas are your cat’s best friends; they get super an attached to their feline friends, especially if both the animals are introduced at a very young age. The size of these canines also helps to eliminate their ability to be a threat, and they are excellent companions for your Burmese Cats. These dogs are even known to mimic cats and start showcasing cat-like behavior, which makes them more attractive for felines. 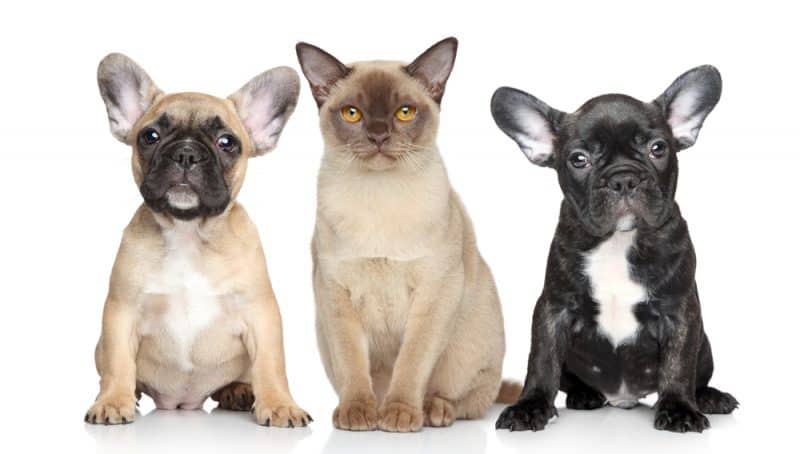 Contrary to contrary belief Bulldogs are actually very affectionate canines. All the reports of erratic bulldog behavior always include a poor dog that I either abused or malnourished. These dogs definitely have the build to intimidate cats if they wanted to, but they choose not to. These friendly creatures are nice to all animals and will be a great addition to a household that has Burmese Cats. These dogs actually enjoy the company of a cat. 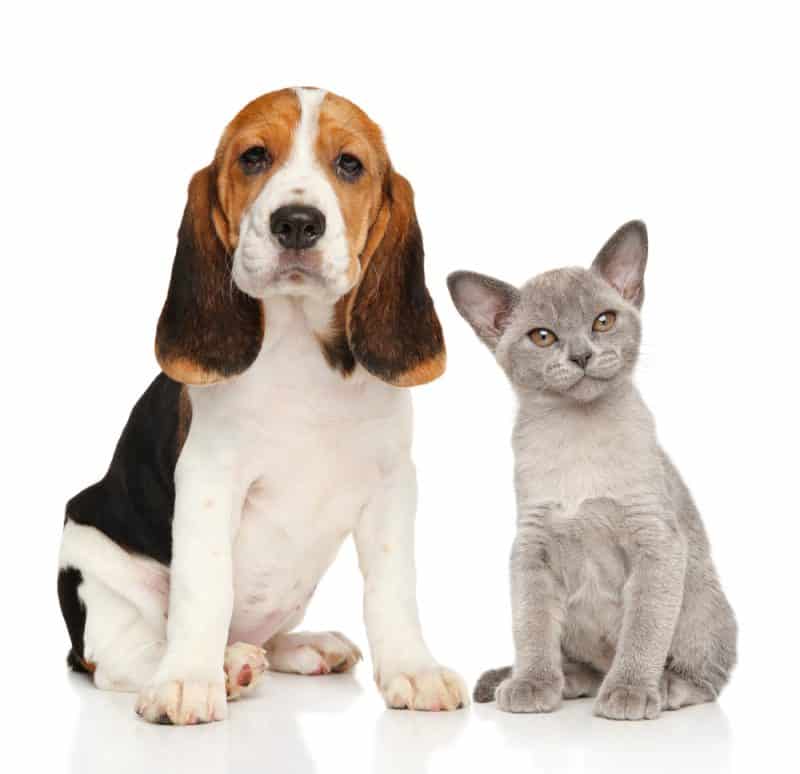 Beagles are an easy-going dog breed that gets along with all kinds of creatures, especially cats. They are super friendly, and they cohabitate peacefully with cats. The best part is that these adorable creatures are just beautiful to look at. They are the kind of dog that everyone wants in their household. They rarely showcase any aggressive behavior and are super gentle and sweet. You should think about getting one for your Burmese Cat.

How to Introduce a Burmese Cat to a Dog?

Whether you have a Burmese and are adopting a dog or vice versa, remember to do it very carefully. There are a lot of factors at play there, and it’s not as easy as it sounds.

Sure, Burmese cats are affectionate and loving creatures, but that doesn’t mean that they’ll be best friends with a dog they just met. Tread lightly, my friend!

Remember to always carry out the introductions at home. You need to do it in a safe environment, where at least one of the animals is comfortable. Doing it at a dog or cat shelter is just exposing your Burmese cat or the dog to potential diseases or deadly bacteria.

Always inspect any animal that you bring home. You can easily bring home a dog or a cat that might carry deadly bacteria that might make all your pets sick.

Start the introduction slowly and gradually. Place your Burmese in a cage and allow the dog to roam free. This way, the dog as well the cat can sniff each other without hurting one other. After some time allow the Burmese out of the cage and put the dog in. Continue to carry out these rotations for a few days. This will help both the animals to get familiar with each other’s scent.

Never leave the two animals alone. When you are not home, confine both the animals in their own separate space. The dog might show some obsessive tendencies towards the cat, wait for the canine to calm down. You will know the cat is calm once she starts to eat regularly and also use the litter box with ease.

Once both the animals seem calm, allow them to roam around in the same room. Closely monitor the whole situation. Remember to put a leash on the dog. Once the dog begins to ignore the cat, you are good to go. This means you are on the right track.

If anyone of the animals showcases fear, you need to take things even more slowly and wait for both the animals to be happy and relaxed. Again at this stage, remember to confine your dog to a separate area when you are not home.

On the other hand, if you have a Burmese cat that attacks a calm dog and doesn’t believe in surrendering, then you should definitely not bring home a dog.

Burmese cats are the decedents of the Siamese cats, and due to that, they have inherited the smartness trait. Burmese cats are brilliant creatures, and they are super affectionate.

How Much Does a Burmese Cat Cost?

The price of a Burmese Cat really depends on the Breeder you opt for. In general, A Burmese cat will cost around 400 to 600 dollars, but if you buy a cat that is registered and belong to a reputable breeder, then it might cost a bit more. In the UK Burmese cats cost around 500 to 700 Pounds.

Do Burmese Cats Shed a Lot?

Burmese cats have a very short coat, and they do not shed as much as most cat breeds. The Burmese cats are actually considered as hypo allergic as they shed very little. These beautiful creatures have a silky and soft coat.