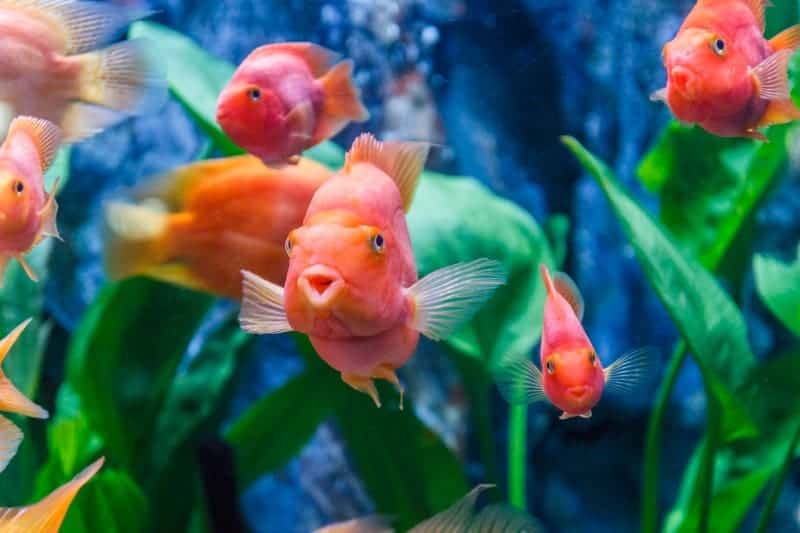 “Stop and wait until they chew their last bite!”, this is my mind when I feed my pet fish. I always wait for them to chew food well, as we humans are trained to chew ours. But my Goldfish become so anxious and want the next food pellet right away. It might not be a good idea as my fish might choke. But guess what? My these apprehensions just flew away as I investigated that whether fish actually chew the food? As they are always eager for the next bite, so might be they just gulp the food without chewing? How do fish eat their food?

I got answers to all these questions and this is what I found out:

No, fish don’t chew food the way we do (with one exception). Fish prefer to chop or cut the food into pieces and gulp it with the help of their teeth and tongue. Fish don’t have hands to eat food, so they use their mouth to grasp the food, and teeth and jaws help to fix the food in the place. The tongue helps to push the food to the throat. The eating process differs from species to species.

Do you want to know about that one fish that chews its food just like mammals? And the whole process through which fish are able to eat food? Read below and get all the right answers.

Do fish chew their food?

All the living beings need food and they eat it one way or the other. But mostly it’s about putting food in the mouth, processing it, and then digesting it. Talking about animals, some start processing food right from their mouth, but others process it in the stomach. When the food is processed in the mouth, it has to be turned into very small particles throw chewing. The chewing process has started from mammals. All other animals start processing their food in their stomachs (if any) or intestines.

So, if we talk about fish, then fish actually don’t chew the food. They prefer to gulp it after cutting it into small pieces. Then these bits are gulped as they are.

Fish don’t need to chew food as it can’t choke in their throat. Also, the food is digested in the stomach instead of some digesting in the mouth, like some portion of our food already digests in the mouth when we chew the food.

Having said that, every fish species has adapted different methods to bite and cut the food. So, fish species eat in different ways depending upon whether they feed on animals, plants, or both. Let’s see how fish eat.

How do fish eat?

Wondering how your pet fish eat food? And do all fish eat in the same way? Well, every fish species has its own way of eating food. Fish live in diverse habitat from small ponds to deep seas and oceans. So, fish eat in their own different ways, depending upon the waters in which they live, their surroundings, and the type of food that they eat.

Humans have the choice to eat whatever they want- some choose meat only, some prefer veggies only, and some eat both. But fish don’t have a choice. They are bound to be either herbivorous, carnivorous or omnivorous. So, they have a particular mouth, teeth, tongue, and digestive systems, depending upon what they eat.

The first and foremost step is to put food in the mouth. We put food in our mouths through our hands. We can hold the food, while our teeth and tongue can fix it in the mouth. But what about fish as they don’t have hands? Let’s find out how fish eat without hands.

How fish capture the food without hands?

Fish have usually largemouths. When they want to eat, they open their mouth and expand the buccal cavity. This creates a low pressure. They allow the water to enter the mouth, which creates suction and the food particles or prey gets inside the mouth. The excess water is then removed from the body through gills.

Now, once the food enters the mouth, it is held inside the mouth through their jaws and teeth. Fish can hold food by biting it in the mouth, and then the cutting process is easy.

Unlike we humans and other mammals, fish don’t use their tongue to hold the food and move it inside the moth. But the tongue is shaped to push the food to the esophagus.

The role of teeth in eating

All fish have teeth except adult sturgeon, pipefish, and seahorse. The shape of teeth differs from fish to fish, depending upon what they have to eat. Some sharp teeth, some have pointed ones, and some posses large, flat teeth. Fish also possess two teeth on the roof of their mouth, just above the esophagus. These teeth are called pharyngeal teeth that are used to crush the food.

The teeth are embedded in the jaws that are made up of cartilage and are moveable. These moveable jaws help the fish to eat food quite efficiently. Some fish also have pharyngeal jaws, while others don’t have it.

Carnivore fish generally like to run after the prey and catch it. That is why their mouths are way bigger than other fishes. They have sharp and pointed teeth. This helps them to catch their prey efficiently.

Carnivore fish create suction through opening the mouth and expanding the buccal cavity. Once the prey gets inside the mouth, fish starts to cut it into pieces through sharp teeth. They then gulp those pieces in their tummy without chewing much.

Pharyngeal teeth help to cut the prey further, and tongue helps to push it to the esophagus. This is how carnivorous fish manage to eat their prey.

As herbivores have to feed on plants, they don’t possess sharp teeth. They just put the plant in their mouth and cut it if necessary. Otherwise, they just gulp the plant and digest it.

Herbivore fish create much powerful suction if the plant is rooted. Herbivore fish have a long digestive tract because they have to digest the food full of fibers.

Omnivores, as they have to eat both meat and plants, have a combination of teeth. Some are sharp that help cut the prey into pieces.

The digestive system of omnivorous fish is designed to digest any sort of food.

The eating method of omnivorous fish is similar to that of herbivores. Omnivores are not fond of chasing and gulping a live prey.

How filter feeders eat their food?

Filter feeders, like the whale shark, has large flat teeth. They have a filter located in the mouth through which they filter out the food particles. Filter feeders usually forage on phytoplankton.

So, every fish have a different way of eating food. Their digestive system is also modified for the type of food they eat.

Now, as you know, how fish eat and digest the food, you can easily understand when your fish in the tank requires to be fed and also how to feed it. As it’s clear that fish don’t chew the food much, so you can throw a pellet whenever your fish asks for. No need to wait, it gulps the food within milliseconds.

Sting Ray: The only fish that chews food like mammals

This amazing discovery has taken this pride form the mammals that only they can chew food.

A study has clearly shown that freshwater stingray, which has beautiful spots on it, actually chew just like mammals!

Stingray captures food by folding the edges of its flat body to create. This enables it to capture the prey through its pectoral fins. It can now put the food inside the mouth where it has teeth on big moveable jaws.

While the prey is inside its mouth, it moves its jaws from left to right, up and down, just like we chew. Afterward, the food passes to the throat, and this movement stops.

Stingray always chew when they eat insect larvae. Insect larvae have healthy fats that are good for stingrays. It tears the outer hard protective layer on insect larvae, by this chewing process. Breaking it into pieces wouldn’t be enough as the outer shell doesn’t break like this.

So, this discovery shows that mammals and stingrays have evolved similar chewing processes to eat efficiently.

If you’re wondering how your fish eats, then your search is over. Above is a detailed article on how fish eats and do they chew or not?

Actually, fish don’t chew. They gulp the food usually. The cutting off food and gulping depend on the type of fish you have. Fish creates suction to put the food in mouth as they don’t have hands to do so.

Do fish have teeth?

Yes, most of the fish have teeth except old sturgeon, sea horse, and pipefish. Fish have a set of teeth in moveable Jaws. Carnivorous fish have sharp and pointed teeth, while others have flat teeth. Fish also have two teeth near the throat which are called pharyngeal teeth.

Do fish have a stomach?

Some fish lack stomachs. Lungfish is one such fish that lives in freshwater and breathes through the lungs. The digestion in lungfish takes place in the intestines.

Do fish know when they are hungry?

No, fish can eat whenever they’re fed. So, you have to be very careful not to overfeed them, as it can lead to many health problems.