Fish are living beings just like us, and there are certain things they need in order to survive. All living things have a limit to which they can adapt to extreme temperatures.

Do Fish Get Cold? Where Do Fish Go When It Freezes Outside? Most fish are lukewarm blooded, and the temperature of the water does have a drastic effect on their metabolism. They do feel a little sensation of being cold but not like us. When the water gets too cold, fish form groups and gather at the bottom of the water bodies.

Effects of Temperature on Fish Movement

The temperature of the water around the fish greatly affects their behavior. The activity levels of fish increases or decreases, it encourages fish to move in one area whilst avoiding other areas, and changes in water temperature can also influence reproductive and feeding activity.

Fish are intensely influenced by the temperature around them as they are unable to regulate their body temperature. If the water in their surroundings is warm, fish metabolism accelerated, respiration and feeding increase, and there is a general increase in movement. On the other hand, when the water is cooler, fish tend to become lethargic and stay inactive.

The same can be said for other organisms that live the water bodies and are prey for the fish, and some fish species have adapted to this fact and go after slower kinds of prey. This is also another reason why carp and bass fishing is conducted in winter. These fish are more specialized in slow prey, and so they are much more active colder waters as compared to warmer waters.

In general, most fish species prefer faster prey, and they are considerably more active in warmer waters.

In areas where waters with different temperatures meet, fish often start to produce eggs and sperms, and they begin to display reproductive behavior such as forming schools or changing the position in the water column. Drastic and sudden changes in the temperature of the water bodies can sometimes trigger migrations to spawning grounds.

Maintaining the Temperature  Balance in Your Aquarium (Video)

How Does Water Temperature Change?

The depth of water is one of the major factors that influence water temperature. As heat is derived directly from the sun, warmer tends to be much warmer near the surface of the water, and it gets cooler with increasing depth.

This is why the discussion about how the temperature of water influences fish behavior tends to emphasize on the surface of the water and the area which is present immediately under it.

Another way the temperature of water bodies change is that the currents also bring different temperatures together, and the areas where this tends to happen are zones on intense fish activity. Such regions are known as oceanic fronts, and there the drastic and sudden changes in temperature encourage the growth of plankton itself or other fish that prey on it.

Effect of Winters on Fish

Winter can be a little hard on Fish, as I mentioned before, Fish do not have the ability to regulate their own body temperature.

First off, fishes in freshwater are seldom threatened by the notion of freezing to death because of one of water’s most unique qualities, just like most substances, the density of water increases as the temperature drops. However, water is the densest when its slightly above its freezing point, density tends to increase between 4 and 0 degrees Celsius; this causes the ice to float.

This property is super important for Fish, were it not this quality, then lakes and rivers would begin to freeze from the bottom-up and Fish in more colder waters would freeze to death.

You need to understand that not all Fish are so bad at adapting to temperature changes; some have the ability to tolerate very cold or even very warm temperatures. Thermal tolerance actually plays a huge role in fish distributions, but within their range, Fish have adapted in unique ways to deal with cooler temperatures.

When the temperature becomes too cold for the Fish, they make seasonal movements to thermal refugia. Thermal refugia can be specifically vital in northern climes, where the warmer groundwater helps to keep the aquatic habitats free from ice.

Other fish are known to utilize allozymes, which are different forms of the same enzyme, which are controlled by various alleles, which enable the reactions to function at different temperatures.

How to Fish Regulate their Temperature 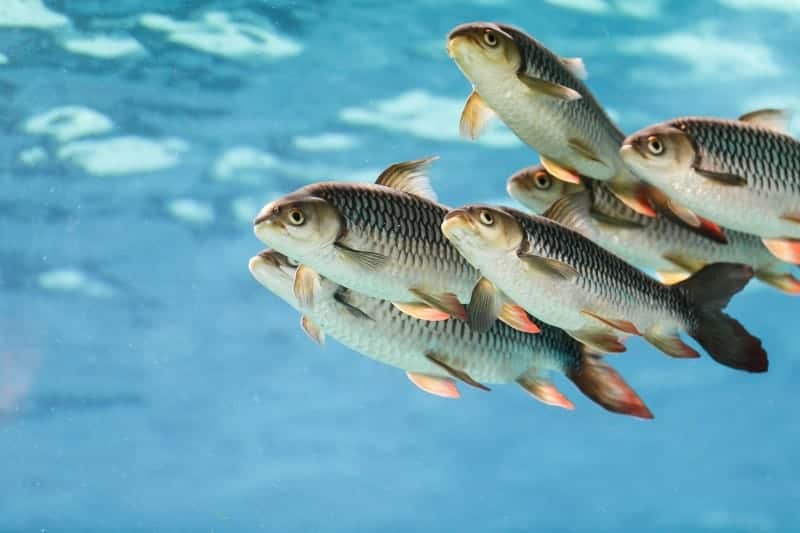 Cold-blooded animals, like most fish, have the ability to tolerate different temperatures. This is because, in order to survive in different environmental temperature changes, they need to function in several body temperatures.

Thermoregulation is another concept that involves the maintenance of body temperature relatively constant. So apart from their ectoderm or endoderm, at the same time, fish can be thermoregulation or not. This characteristic can be explained by their behavior or by physiologic methods.

Different water masses in the sea present different temperatures, the deeper waters are much colder than the shallow waters. Fishes can hence choose the water mass they want to live in according to the temperature. This is an avid example of thermoregulation.

When fish are subjected to high temperatures that produce Heat Shock proteins, this quality is not just exclusive to fish; this response is actually produced by all the animals. These proteins are synthesized when the temperature around the body of the fish rises drastically. The increase in temperature could be fatal for fish as high temperatures destroy cause proteins to get denatured and lose their function.

This is where Heat Shock Proteins play their role; they are responsible for compensating the denatured proteins, helping them to fold again.

Fish have a body that protects them from freezing to death; without it, their body fluids would freeze from -0.1 to -1.9 degrees Celsius. In order to avoid being frozen to death, some fish produce a substance that helps them decrease the freezing point, the substance is known as anti-freeze.

The substance helps to join the ice crystals and prevents them from growing. Some fish who live in the northern part of the planet, have to carry anti-freeze in their blood all year round, most fish produce this substance only during winter.

Supercooling is another method that helps fish to survive in cold water. Supercooling is the process in which the temperature of a liquid or a gas is lowered below its freezing point without it becoming a solid. Most aqueous solutions are progressively cooled, and they do not freeze even when they are below the freezing point. Keep in mind that this is an unstable state, and the supercooled solution can suddenly freeze.

Can fish die if the water is too cold?

Coldwater has different effects on different fish. Generally, it affects the ability of the fish to move and eat. If fish that cannot tolerate cold water are kept in freezing waters for a prolonged time, then they will eventually starve and die.

Can fish freeze and still live?

This might come as a shock to most people, but yes, they can sometimes. It has been witnessed that some fish spend the winter being frozen in ice, and in the summer they come out swimming once the ice melts. Some fish species have a kind of anti-freeze substance that helps them to survive in freezing cold waters.

Fish can die due to a lack of oxygen in the water, but the word drown does nit suit the case. Drowning implies that fish have air-breathing organs which they do not. Smother or asphyxiate are much suitable terms.

Can fish survive in milk?

Fish can swim in milk as it had the same viscosity as water, but I doubt they can survive in it as fish are not evolved to survive in milk, and they can even catch certain bacterial infections.

Yes, they can, but the fish equivalent to pain is much different than that of humans. Fish have neurons known as nociceptors that are able to detect potential harm such as intense pressure, high temperatures, and caustic chemicals.

Why do fish die when the water changes?

Contents show
Effects of Temperature on Fish Movement
Maintaining the Temperature  Balance in Your Aquarium (Video)
How Does Water Temperature Change?
Effect of Winters on Fish
Mutant Enzymes
How to Fish Regulate their Temperature
Frequently Asked Questions
Can fish die if the water is too cold?
Can fish freeze and still live?
Can you drown a fish?
Can fish survive in milk?
Can fish feel pain?
Why do fish die when the water changes?