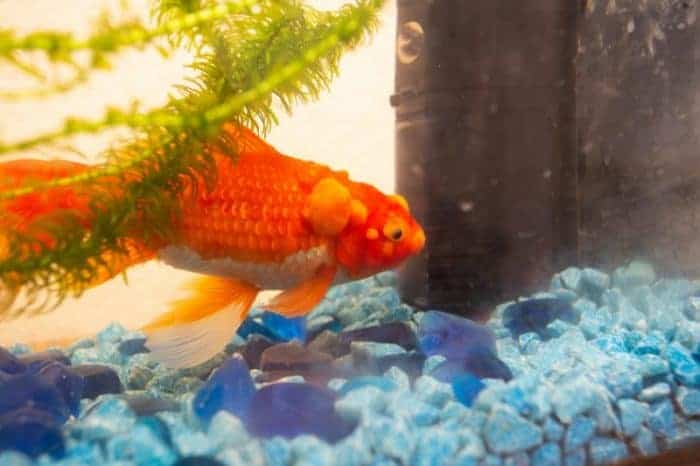 I bet you’ve never seen a fish with ears that makes you curious about its hearing sense so let us learn about how they hear and communicate in water.

So, do fish have ears?

Yes, they absolutely do. But how come no one has ever seen them? Well, fish have an inner ear just behind the brain that works with the help of a lateral line, ear stones, and vibrations in the water. This means that their hearing sense is pretty much normal and no different than other marine animals.

That being said, if you’re looking for a detailed yet simple explanation for it then make sure to read further.

How do fish hear? (Video)

How do fish hear? 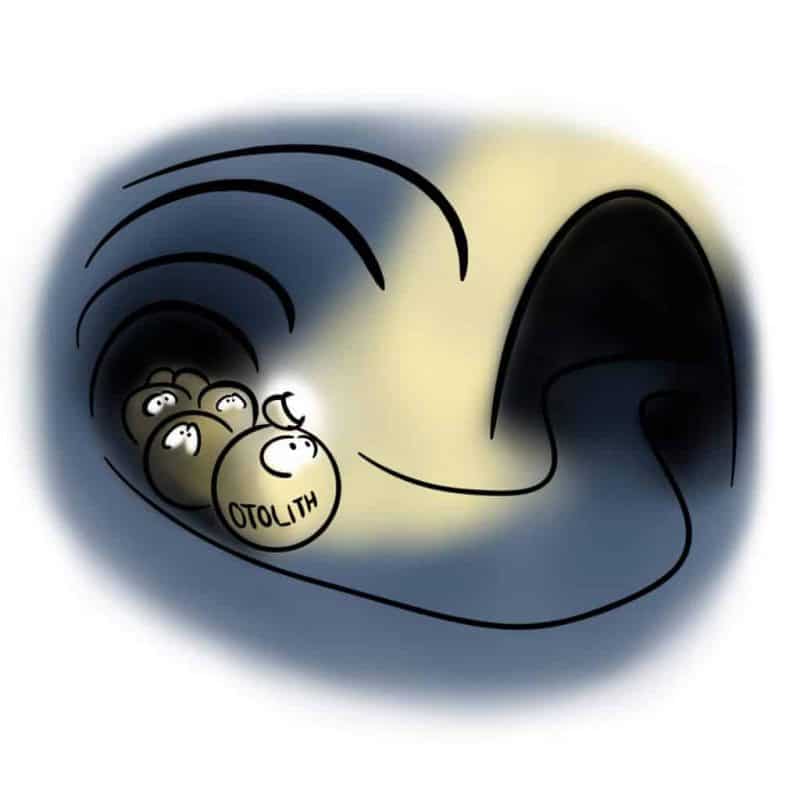 So now that it is clear that fish have the absolute ability to hear, you might be thinking how does it happen?

As none of us has ever spotted a fish with ears, it would be funny to imagine one with the same. This is exactly what made me dig in for some more information on how they can not only hear but also detect motion in the marine environment from long distances.

So, the main fact to consider here is that fish have an inner ear that works in correspondence with muscle bone, swim bladder, and water vibrations.

However, to have an elaborated version of this knowledge, let us take a look at some more accurate pieces of information.

All of us are taught in elementary school science that sound travels faster in water than in air. Well, now is the time to use the information in knowing some details like fish’s natural communication tactics and hearing efficiency relating to stuff like sound frequency etc.

So if you’re more interested in learning about it then you’ll get your answers gradually in simple explanations given below.

Can all types of fish hear?

Yes, all species of fish can hear, some with the help of lateral line and otoliths while some using their swim bladder.

According to marine wildlife experts, fish have the ability to hear at low frequencies as they are highly sensitive to sounds.

Remember the movie ‘Finding Nemo’ and how Nemo’s father and Dory could sense danger even from far away just by hearing some suspicious sounds?

Yeah so that is exactly what we’re discussing here. You see, lateral line and otoliths are parts of the body that every fish has. However, not all kinds of fish have swim bladders because it also serves other purposes than helping in hearing.

In fact, other than working as a hearing aid, one of the main purposes of swim bladder is maintaining the fish’s stance in water. Hence, it also makes it easier for species like Herring and Pacific Blue Tang to quickly pick up sounds instead of using muscle bone or water vibrations.

Let me share another example. Carps use their swim bladder to hear sounds, sense motion, and all other kinds of voices in the aquatic environment. This is also why their hearing ability is more efficient than the ones without a swim bladder.

Do fish hear less than other marine species?

This is equivalent to asking do all humans have the same eyesight or sense of smell?

This might not be the best example but you got the picture, right?

So, to get to the point, not all types of fish have the same abilities and organs. For instance, fish that live in or near the seabed are not that sensitive to sounds like the ones that float near the surface or mid of the ocean.

Also, as mentioned earlier, not all fish have swim bladders which means that their hearing ability somewhat gets affected by it too.

If we look at the numbers, fish that stay near the seabed cannot hear at a frequency of more than 1 kHz. However, some types of fish with increased hearing sensitivity can also hear at frequencies as low as 0.1 Hz.

Having said this, it would be unfair to say that fish hear less than other marine species because as fish have different and multiple skills plus capabilities, the other marine animals might also have more or less the same.

How does sound travel to fish’s inner ear?

Fish have an amazing natural hearing system that works through inner ear and otoliths present inside it. Here is a step-by-step explanation of how sounds travel to fish’s inner ear.

Not to forget, water and fish’s bodies have almost the same density which is why sound can go through its body. This also gives a simpler explanation of how a fish can sense water vibrations through its bones and muscles.

Fish’s hearing sense: Is it any less than any other senses?

Here is another ‘human’ example to help understand the phenomenon more clearly.

I’m sure all of us have experienced when every person in a group like a certain taste of food or have same comments about it. However, there also might be someone who finds the taste more or less salty, bitter, sweet, or spicy. This does not mean that the person with a different opinion has taste buds that do not work fine or are lesser than the other senses.

Similarly, although fish do not have an ear on the outside of its body like eyes and tongue etc., it can still hear much clearly like other marine species in the ocean.

However, when it comes to finding out the ability of senses based on frequency rate and sensitivity, it can be said that the hearing sense of a fish might be relatively lesser.

The main reason for this speculation is very much obvious and that is the evident appearance of main organs i.e. eyes and mouth whereas the ear is nowhere to be seen on the body.

This, however, is an assumption only that has not been confirmed by marine specialists. Therefore, it would be wrong to approve of it while definite claims are being made by official marine authorities around the globe about hearing and other senses of fish that relate to its intelligence also.

Is there an opening to the fish’s ear? 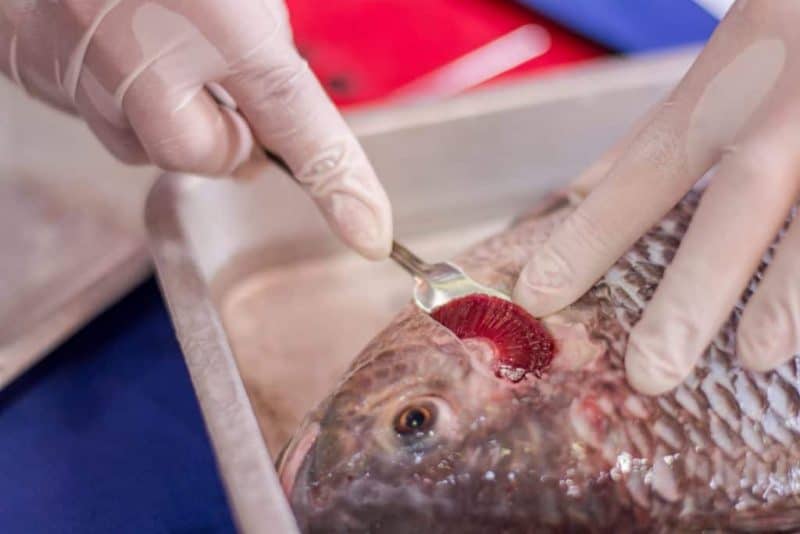 Although a fish’s ear is present on the inner side just behind the brain, it has a small opening from both sides of the head that leads to it.

The ear stones are not visible from the opening as it is a very thin passage. So even if you try to have a look at a fish’s inner ear, there is no way it can be seen or detected without the usage of special equipment.

However, it can be said that the spiral thing on the head of the fish is the opening because it is the only open thing that might direct to the ear.

How well can fish hear?

For instance, a carp has a swim bladder which makes it capable of hearing sounds and sensing vibrations from very far.

However, regardless of not having a swim bladder, all types of fish can hear that helps them detect prey or predator or even get used to a certain type of sound as music.

Can fish hear when you talk to them? 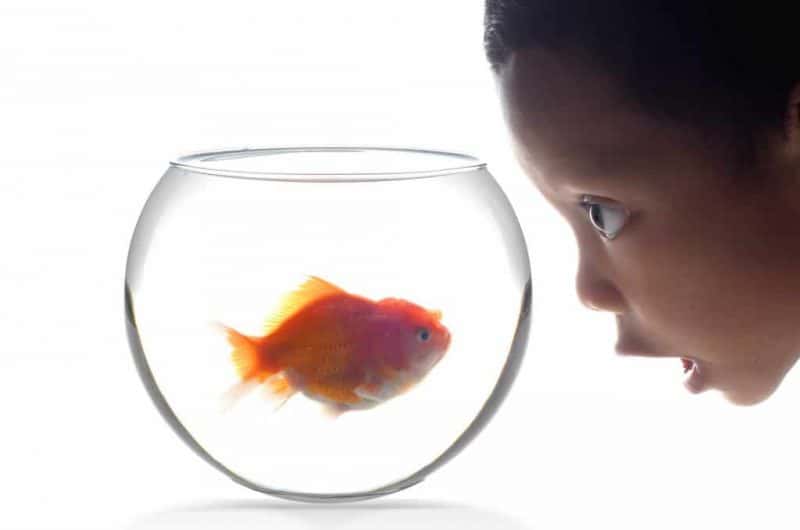 Although fish have the ability to hear like any other water animal, they are not bothered by the different kinds of voices unless they are:

So even though i hate to burst the bubble but when you think they’re paying attention when you’re talking, it is most likely that they’re either sleeping or relaxing.

The reason for this is that they’re not disturbed with a human talking to them because it’s neither sharp nor melodious enough to draw attention.

How do fish use sound?

Although fish do not particularly make noises from their mouths, they have this system based on 3 different methods that help them produce various sounds.

However, the most common and used method of fish producing sound is drumming i.e. using the sonic muscles as it is a relatively easier and more natural way of creating vibrations in the water.

What does a fish use for the hearing?

Mainly, there are three things that fish use for hearing.

The ear stones or otoliths are used by fish to detect vibrations through muscle sense while most of the bony fish use water vibration for hearing motions.

For instance, fish can sense the movement of prey, predators, and their mates to react accordingly.

Other than this, the hearing balance is done with the help of the inner ear that results in picking absolute correct sounds.

What frequency can fish hear?

As sound travels faster in water than in air, fish have a highly sensitive inner ear to detecting acceleration. They can hear at low frequencies below 100 Hz and a maximum of 200 Hz.

Apart from this, studies have also shown that fish can hear at extremely low frequencies starting from 0.1 Hz.

Which part of a fish does not help it to hear?

Almost all body parts of fish somewhat participate in helping to hear and sense vibration. For example, bones, muscles, and otoliths.

However, its tail is one of the parts of the body that does not in any way help a fish in hearing as it is not able to identify vibrations and motions.

This also proves the fact that fish have a strong sense of hearing as almost the whole of its body works simultaneously to identify different sounds.

How far can fish hear?

The fact that  most fish have swim bladders near to the inner ear makes them highly sensitive to hearing sounds from very far. The hearing sensitivity of fish is up to 3 kHz which makes them a little less capable than humans with a sensitivity of around 17 to 20 kHz.

Do fish respond to music? 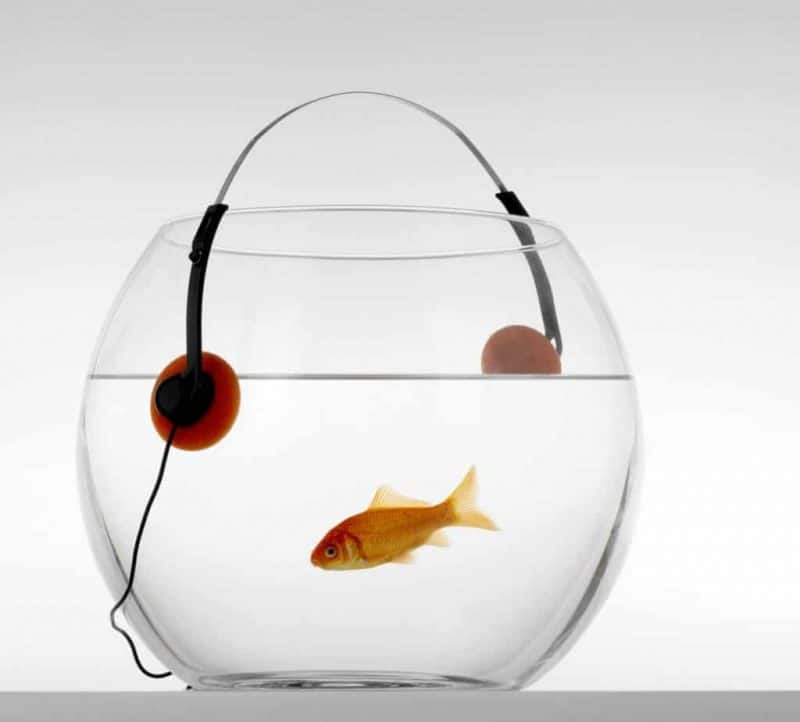 Yes, fish seem to like music when it’s soothing and additive, especially goldfish that not only loves to listen to music but can distinguish between two different types of compositions.

This means that if a fish is made to listen to the same music frequently then it might as well follow it for relaxing or swimming in particular motions.

Also, fish can easily get used to hearing similar sounds or noises that are melodious, soft, and calming.

Apart from sharks, whales, and big marine species, fish is one of the calmest aquatic creatures while they swim in peace while making subtle movements in the water. Their hearing sense is no more a secret when the anatomy of its inner ear has been clearly explained with the help of the whole system involving multiple organs.

The lateral line and muscle-bone work in correspondence with vibrations in the water for the fish to give a green signal of the type of sound interpreted by the brain.

So, if you have a fish as your pet then you must try playing music or having a conversation as you never know, it might also start responding to it sometime by showing different ‘fishy’ gestures!