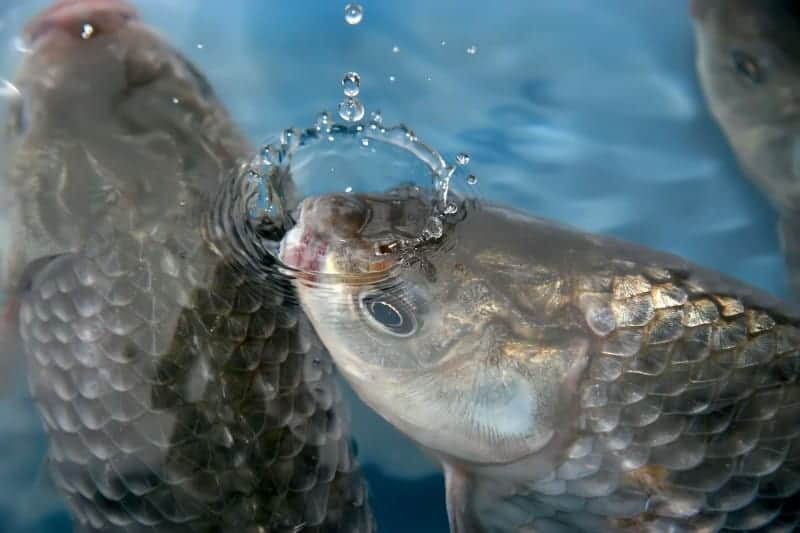 Like mammals, reptiles, and many other creatures, fish also need oxygen to survive. However, their mechanism differs massively compared to other animals, given that they are surrounded by water.

So, do fish have lungs?

No, fish do not have lungs. Instead of lungs, they have gills on the outside, and they use these gills to take oxygen into their bloodstream and live. Lungs are used for breathing in oxygen from the air, and they will not be able to function in a watery environment. 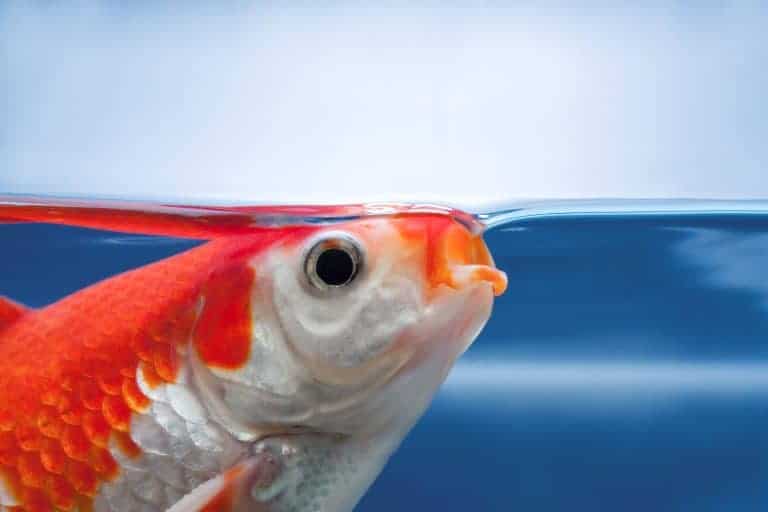 Why do Fish not Have Lungs?

Fish do not have lungs because lungs are meant for breathing in air. Fish take in gulps of water to absorb oxygen in their circulatory system.

If they had lungs, the water would fill up inside the lungs and drown the fish instead of helping them breathe.

Gills, on the other hand, are designed for pumping out the water that fish take in so they can breathe and not drown.

You can imagine gills as pumps of water that release excess water from the fish’s system back into the water body.

How do Fish Breathe?

One thing is clear now:

The other thing we know:

They have gills, and they need oxygen to survive.

We mammals and other land creatures have oxygen all around us in the air we breathe. Similarly, oxygen is also dissolved in the water that lives in as well.

Fish take in water by the mouth, absorb the oxygen in their bloodstream and pump the rest of the water out through their gills.

The gills are seen as bright red openings on the exterior of the fish.

They are bright red because there are blood vessels just underneath the surface of the gills.

The gills are covered by a breathable covering to allow for the exchange of gases between the capillaries and the water outside.

Just like the lungs in mammals, carbon dioxide is taken out of the gills as it leaves the capillaries, and oxygen is absorbed in.

So just like we humans breathe in lots of other gases in the air along with oxygen (Nitrogen, Noble gases, water vapor) and then keep the oxygen and breathe out the rest, fish do the same with water.

They keep the oxygen dissolved in water in their little systems and release the water and other dissolved gases back into the sea.

Gills are, therefore, specifically designed to work only in a fluid environment.

An interesting fact about this mechanism:

It turns out that the circulatory system of a fish flows in the direction opposite to the flow of water.

The contrasting flow of both the system is what makes the breathing of a fish so efficient.

Mother Nature never fails to impress us with its nifty inventions for keeping creatures alive!

How do Fish Breathe? (Video)

Do Fish Only Need Gills to Breathe?

Interestingly enough, even though gills are basic components of a fish’s body, there are other ways to let fish breathe as well.

The process of evolution has developed the bodies of modern fish to have an alternate method of storing and circulating oxygen in their blood.

For example, some fish have a swim bladder below their kidneys.

Through evolution, the swim bladder has become a specialized lung-like organ that stores oxygen.

Fish that contain a swim bladder need access to the surface above water to survive, or they will drown due to lack of air.

The fish contain this organ also control their depth in the water with its help.

If the swim bladder is mostly full of oxygen, the fish becomes buoyant and stays close to the surface.

If the fish releases the oxygen in the bladder in the bloodstream, the fish goes deeper underwater.

Another specialized organ is involved in absorbing oxygen from the swim bladder into the bloodstream.

Do all Sea Creatures Have Gills?

Gills are the most common breathing organs in all sea creatures.

Many sea creatures possess organs that perform the same function as gills do even if they don’t have true gills.

However, not all sea creatures and aquatic animals have gills for breathing.

Here are some sea creatures other than fish and their breathing mechanisms:

The diversity of creatures in the sea maintain the environment and keep it habitable for many forms of life.

Can Fish Survive in any Liquid Environment?

After figuring out these fascinating facts about fish, the question of their survival in other environments certainly comes to mind.

Liquid environments, to be precise.

And as for survival, fish can most likely not survive in other liquid environments for more than a short period.

However, most fish can breathe in certain liquids for some time.

It mainly depends on how much the new liquid is like water.

You see, fish have evolved over a million years in the water. Water has oxygen dissolved in it that the fish need, yes, but there is a specific concentration of other solutes as well.

For example, water has a specific amount of salt, carbon dioxide, and other solids and gases dissolved in.

Not every watery environment has the same concentration of these substances, but the difference is not too vast if it is inhabited by sea creatures.

You have probably heard of the terms saltwater fish and freshwater fish.

You would benefit from knowing that saltwater fish cannot survive in freshwater and vice versa.

The reason for this is that their bodies are only adapted to a certain concentration of substances that they can filter through when they breathe.

If you put fish in, let’s say, Coca Cola, the carbon dioxide level, the sugar level, and the number of other substances dissolved in would be very different from water.

If there is some oxygen dissolved in, then some fish might survive for only a short time. Most fish will have their cells burst or shrivel up in environments with harsh levels of electrolytes.

Milk, on the other hand, has a very water-like environment. There is oxygen dissolved in milk, as well.

However, there is a large number of other substances like protein molecules, sugars, and fat molecules in milk that will hamper the taking up of oxygen by the fish.

In conclusion, we can safely say that fish will not be able to survive for long in any liquid other than water. 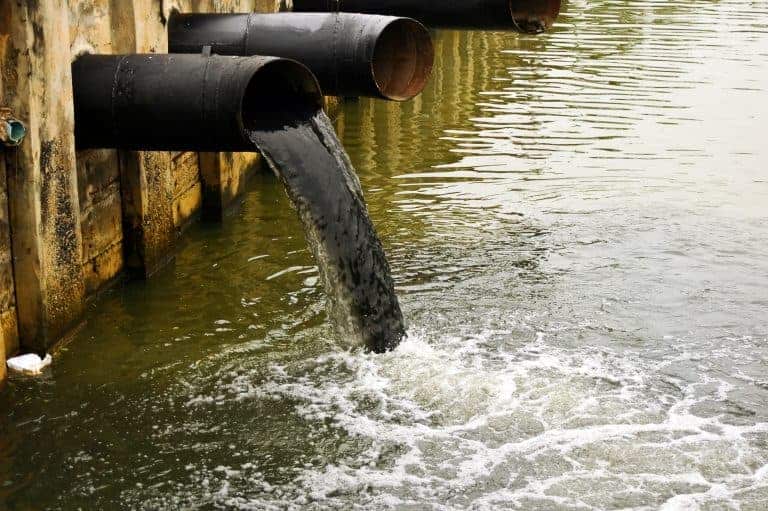 Industries are polluting the oceans and other water bodies at an alarming rate now.

And disasters such as oil spills only make it worse.

We can see how such vast changes in the oceanic environment change the concentration of substances that are found in the sea.

So, we can also imagine how difficult it must be for fish to survive in these waters that are becoming poisonous so rapidly when they have spent all of their time on Earth adapting to a specific concentration!

Gills are not lungs.

Gills are, however, the organs that fish have instead of lungs so they can breathe.

However, the only similarity between gills and lungs is the gaseous exchange that takes place between them and the outside environment.

Why Do Fish Have Gills Instead of Lungs?

Fish have gills instead of lungs because lungs are not adapted for breathing underwater.

If you fill the lungs with any fluid, even water, they stop functioning normally.

Fillings lungs up with water are how you drown.

So, if fish had lungs, they would drown.

Gills are pumps that pump out the water in the system of the fish after it has taken up the desired oxygen from it.

Do fish Have Alveoli?

No, fish do not have alveoli.

Some fish have air sacs to store in oxygen as supplements, but most fish are devoid of alveoli.

Their only source of breathing is through their gills.

Can You Drown a Fish?

However, fish can die due to a lack of oxygen if they are devoid of it.

Some fish also need to stay close to the surface to breathe in oxygen. Even then, they can get asphyxiated but cannot drown.