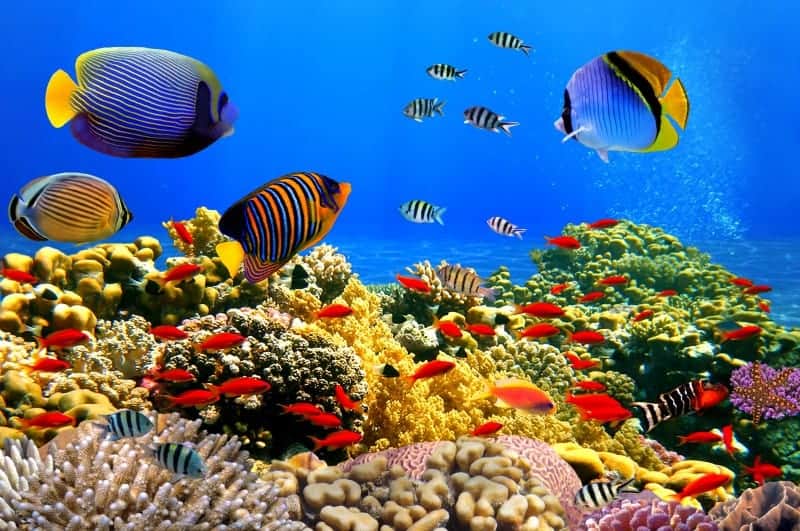 The underwater world is a riddle for humans. We are yet to discover all the mysteries of ocean beds and deep seas. The sight of underwater is incredible- fish of a gazillion types, plants, algae, plankton, and what not! But what do you think: is this underwater world silent? Do the fish make noise, or they just don’t talk? If they make noise, then what are these sounds like and how they produce them? All these questions are soo intriguing. The good news is that after doing deep research, I got answers to all these questions.

Here are the answers:

Yes, fish do make noises. Fish make different types of noises for different reasons. But they don’t make sounds by using their mouths. Fish use their swim bladder, bones, and by changing directions abruptly. The underwater world is noisy, and that makes it even more fascinating!

I know many deets are missing in the above summary. So, read out below because all the interesting details about fish noises are worth knowing.

Do fish talk to each other? (Video)

Talking about cats and dogs, they are good at making noises. Even two years old baby can imitate them. But what about fish? Yes, fish do make noises. Surprised? Many species of fish make different sorts of noises for different purposes. Yes, the fish in your fish tank might be making some noise right now. Some fishes don’t make sounds at all. For example, the Goldfish are completely silent fish.

We can’t hear fish, obviously because of the difference in our habitats and frequency of sounds. Fish make low-frequency sounds, often less than 1000 Hz, which explains why we can’t hear them most of the time.

Even in the early 2000s, we humans were of the view that fish remain silent. They connect with each other through many other ways, like changing the color of different organs, including gills, moving their fins and tails, and likewise. Nobody thought that fish can make sounds and that also of different types.

But scientists really wanted to know what’s going on underwaters. They wanted to “hear” the underwater world. They tried but couldn’t because of the bubbling sound of scuba gear. So, they said goodbye to the scuba gear and used another way of breathing- the scuba diver was now able to breathe its own exhaled air again and again. A filter removes carbon dioxide from the exhaled air, and it’s good to breathe that air again. No scuba gear and a hydrophone finally made it possible to hear the inside of an ocean. And surprisingly, there was too much noise in there!

Using hydrophones, researchers were able to conclude that there are different types of sounds. So if we talk about fish, then fish make a variety of sounds depending upon the species and the reason they are making the sound.

Next, what scientists did was that they used a camera as well. Whenever they heard a noise by the hydrophone, they saw from the camera to figure out which fish is making the sound and why.

What sort of noises do fish make?

You will be amazed to know, but fish make diverse sounds.

Fish can grunt, hum, bark, purr, hoot, rattle, whistle, and tinkle. And this is not it. They make noises that even have no names.

Fish make these noises depending upon what they are signaling. But researchers are also of the view that often fish make noises without any purpose as well. They just hum around without any specific reason. It makes them sound even cuter!

This is important to know as we can better figure out the needs of fish. Fish communicate not only with the members of their species but with others as well. Fish can hear each other, and they also respond. It’s just like two people talking (obviously, somewhat different).

The reasons fish make noises are:

How do fish produce sounds?

Fish use different organs to produce sounds. They don’t use their mouth and tongue for this purpose.

Fish use their swim bladder, bones, teeth, and swimming to produce sounds of many different kinds. The frequency and effect of all these sounds are way different from one another.

Let’s know about the three main organs and movements that are used for making noises.

The most commonly used organ for creating sounds is the swim bladder. The swim bladder produces a drumming sound when it’s contracted and expanded using sonic muscles.

The swim bladder is an organ present in the abdominal cavity of bony fishes. Its main purpose is to maintain buoyancy. Swim bladder fills with air either through a duct or by a gas gland. Some fish come at the surface of the water and take the air in. The air through a duct between swim bladder and esophagus allows the swim bladder to be filled by that air. The fish that use the gas gland, extract gas from the circulatory system and don’t need to come to the surface.

In various fish, lateral to swim bladder are sonic muscles. These sonic muscles contract and expand very rapidly, producing drumming sounds. These sounds are produced with different frequencies, from 50 Hz to 1000 Hz, depending upon the species.

Sometimes, the sonic muscles aren’t attached directly to the swim bladder but are connected to it via any other anatomical feature.

Drumming sounds can be interpreted as anything like a purr, knock, thump, and pulse.

Drumming sounds are made by many fish, like a drum, croaker, silver perch, and toadfish.

Many fish use their bony structures and teeth to produce stridulatory sounds. These sounds are produced as a result of rubbing and grinding teeth and bones together.

Some fish grind their teeth, including pharyngeal teeth, while they’re eating. They also produce these sounds intentionally, often to scare off a competitor or predator.

Stridulations are often produced to save the territorial boundaries. In some fishes, the swim bladder amplifies the stridulations by resonating with teeth and bone sounds.

The sounds produced by stridulation are of varying frequencies. Some go above 4000 Hz as well. Stridulations sound like clicking, snapping, or squeaking.

The fishes that make noises by this method are Catfish, sea horses, and other marine fishes.

Many fishes produce sounds by changing the direction or velocity when they are swimming. These sounds are referred to as hydrodynamic sounds. They are often unintentional.

Hydrodynamic sounds are extremely low frequency. They are mostly associated with predator-prey interactions. Sharks can hear the low-frequency hydrodynamic sounds produced by a school of small fishes, and thus, sharks can find their prey easily.

The above-mentioned sounds are not all. Every fish makes different sounds using different methods, depending upon the species.

Let’s look into the noises of some particular fishes to understand it better.

Toadfish have a flat face resembling toads, and they have eyes above their face, instead of sides of the face.

They live in oceans. Male toadfish produces sounds to attract the female. This makes mating easy.

Toadfish have a swim bladder divided into two separate compartments. Each compartment has its own sonic muscle and they can move independently of each other. When swim bladder compartments move at the same time, then bi-phonic sounds are produced.

The three-spines toadfish are the only fish that produces non-linear sounds. These are complex than linear sounds, and they affect humans and other animals very differently. Non-linear sounds are produced by a crying baby and in movies to induce fear and suspense.

Black drum is black or Grey colored fish found in estuaries. The young black drum fish has dark stripes that fade away once they’re adults. Black drum can become huge once they grow up.

Black drum fish often become very noisy. So much so that in 2005, residents of Cape Coral in Florida complained of low pitched sounds that kept them awake throughout the night. Upon investigation, it was revealed that the black drum fish are making noises during their mating season and it surprised the people as to how fish can make this much loud sounds.

Both Atlantic and pacific Herring produce FRTs. They do so at night time when other herrings are close together. Researchers say that they might produce FRT to ensure safety and closeness.

Mostly the sounds of Catfish are heard by their predators, and they become easy prey for them.

Talking Catfish can produce sounds in two ways. They either vibrate the pectoral girdle within, or they vibrate the swim bladder.

Most of the fishes make noises whether they are inhabitants of freshwater or seawater. If we talk about other fishes, then seahorse produces a click sound. This sound is produced when they rub the two sections of their skull together.

Another type of drum, weakfish, produces a purring sound with the help of sonic muscles contracting against swim bladder.

Do fish in your fish tank make noises?

We know now that fish in oceans, seas, and rivers, making a vast variety of sounds. But what about the fish in your very own fish tank? Do they make noises and can you hear them?

Yes, some fish in your tank are also making sounds. Some that are higher than 1000 Hz are audible while others go unnoticed. The Goldfish is completely silent. Bettas make some rattling sounds. Mostly they make sounds at night time, probably finding a mate. Similarly, Gouramis can make grunting noises and can be heard sometimes. Gouramis use their pectoral fins to make noise.

It’s not obvious that you’ll hear your fish. Most often we don’t notice this little squeaky sound. But it’s not that the fish in your tank are all silent.

But don’t think that they make noises because they are hungry. Fish don’t make sounds when they want food. So, if in case you hear a little sound, just enjoy it, but don’t disturb or feed your fish when they’re making noises.

Many living things around us make noises. We can hear out pet cats, dogs, horses, etc. making sounds and communicating. But what about fish? Have you ever wondered whether the fish in your fish tank is making noises or not? Well, fish do make noises. Not only this, they make a variety of noises. They use their swim bladder, sonic muscles, swimming pattern, head, and other organs to produce sounds.

The studies regarding fish sounds are comparatively new. So, many new investigations are on their way and we will be able to figure out more sounds and ways by which fish make those sounds.

Yes, all fish have the ability to perceive sound. They can hear and understand the signals they are giving to each other. Goldfish don’t make noises, but it does hear sounds.

Do fish have ears? Know more about it!

Yes, pufferfish make noise with the help of their swim bladder. The sound can be a blub or a squeak that can be easily heard.