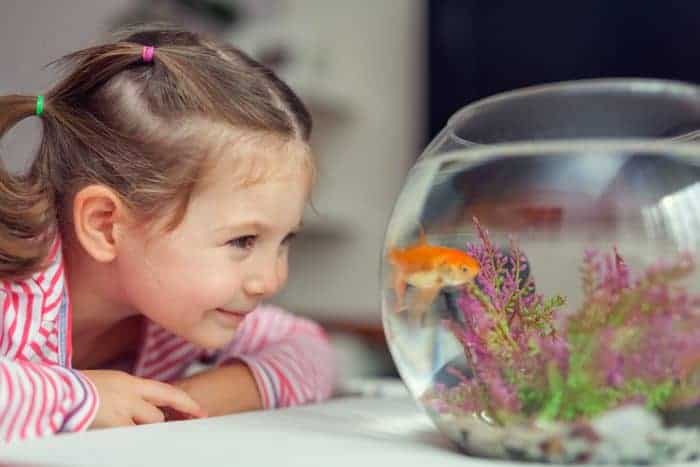 One of the many incredible things that human beings can do is recognize faces. Even though most faces we encounter are similar — a rough oval or round shape, two eyes, a nose, a mouth — most of us can notice subtle differences and distinguish among hundreds of faces. But can fish do the same?

Most people think of fish as lesser than pigs, chickens, cows, and other land animals. We have a vague idea that fish aren’t as intelligent (think of the popular belief that fish only have a three-second memory) and actually wonder whether they can feel pain. This idea is a total myth.

Many fish can recognize owners they’ve spent time with previously, know their territory within fish social hierarchies, learn from other fish, and remember complex maps of their surroundings.

Many Fish Recognize Their Owners

Pet owners want to form a meaningful and lasting bond with their pets. You might think it’s easier to form a bond with a fluffy dog or car, but research suggests that fish can develop a strong attachment with their owners.

Fish aren’t a trivial species with minimal cognitive abilities. Emerging research suggests that fish are not only intelligent but can form a meaningful connection with humans. This is fantastic news for fish owners across the world.

A fascinating new paper in Scientific Reports provides the evidence that archerfish — a tropical fish that spits water jets to stun prey — can recognize human faces with surprising accuracy. Despite lacking complex brain structures, you can train fish to recognize their owners. Fish are smarter than we think and can tell a familiar human face from dozens of other faces.

Do fish bond with their owners?

Fish recognize human faces well… but do they develop a bond with their owners as well?

The answer to all these questions is YES. Fish develop feelings of affiliation with their owners. Your fish can get excited the moment you come into the room. Studies have shown that fish memorize their owners and show affection by swimming rapidly, jumping and flipping, and asking for food.

So, your pet fish know you well and want you to be with them but obviously not in the way cats and dogs do.

As humans, we try to examine and understand animal intelligence. But can we really compare fish intelligence to a pet cat or dog? It turns out that fish are much smarter than we give them credit for and have astounding cognitive abilities. The popular myth associated with goldfish having a three-second memory is untrue, and scientific tests disprove this myth.

Multiple intelligence studies performed on fish measured their memory. During these tests, fish had to memorize a complex pattern to avoid being caught in a net. After only about fifteen trials and about five minutes of practice, the fish knew precisely where to go and escape being caught. Interestingly, the fish remembered the escape pattern to avoid capture even after two years. They also took less time to escape the net.

This trial shows that fish are intelligent and can remember complex routes. Can you tell that fish can recognize human faces too? Probably!

Fish gets excited when it sees its owner (Video)

If a fish can remember how to evade a net, it can also remember a person. Pet owners crave the bond and attachment with their pets. It turns out new research proves that fish not only have a good memory but can recognize and bond with their owners.

A study by Dr. Newport, ‘Discrimination of Human Faces by Archerfish’ determines a fish’s ability to recognize a particular face. Archerfish were trained to distinguish a photo of a human face by spitting water at it. Training fish was relatively easy, with most fish completing training in little time. The doctors rewarded fish for spitting at the right face. When presented with newer faces, sometimes up to 44 human faces, the archerfish spit at the familiar face nearly 81% of the time.

While this is surprisingly accurate, it suggests larger implications. It means archerfish can recognize a specific human face. It can detect the details and nuances that make each appearance special and unique.

Does My Fish Know Me?

There is plenty of fish in the sea with different cognitive abilities. These fish also have varying levels of vision. Fish have a bat-like sense that helps them detect obstacles in their path. Furthermore, fish can make a mental map of their environment.

Evidence suggests that many fish can recognize their owners, and it all depends on their individual analytical capacity. Fish that can identify their owners can also form an attachment. Scientists who worked on the archerfish study report that different fish appeared anxious or skittish if a stranger entered the room. On the other hand, they expressed their bond with familiar scientists by spitting water in their direction.

Do Fish Recognize Their Tank Mates?

Fish can recognize their mates and form a strong attachment. Fish have big eyes to help them find friends and keep track of each other. They also rely on their chemosensory system to recognize other fish of the same species in the vastness of the ocean (or aquarium). Additionally, fish can smell itself and recognize others with the same smell. They use their sense of smell to choose who to school with.

Besides mastering social hierarchy inside the aquarium, fish can understand what’s happening outside of the aquarium.

Different species of fish have different abilities. For instance, guppies can recognize about fifteen different individual fish. Fish need to recognize other mates because they have to understand the established fish hierarchy.

Fish also keep track of the individual relationships within their environment. If two fish fight with one another, other fish will undoubtedly remember both the winner and loser. They can identify who has a higher pecking order in their community.

It can be tough bonding with your pets when they are in an aquarium. Fish owners wonder if they can train their fish to truly recognize and bond with them.

Not only can fish enjoy meaningful attachments with their owners, but also with their fellow fish mates.

Training Fish to Recognize their Owners

It may surprise you, but you can train fish to recognize you. The more you get to know them, the better bond you can create. Fish can quickly become attached to their owners. If you spend time near your new fish, it is more likely to remember you.

Give your new fish at least a week to recognize you. Fish usually swim towards owners they can recognize better. Here are some fish training steps you can take:

It’s easy for fish to recognize anyone who brings them treats. Purchase fish snacks like freeze-dried bloodworms for your new pet. These are excellent training treats because they are small and breakable. Fish also eat mosquito larvae, tubifex worms, and daphnia (small crustaceans.

Treats and food are great for bonding, but over-feeding your fish is dangerous. A full-grown adult fish can eat two to three pellets or three to four bloodworms per day.If your fish’s body becomes swollen, cutback feeding.

Get your fish’s attention

Softly tap on the aquarium glass and check if the fish looks at your hand. If not, give them half a worm or a treat to grab their attention. Once they focus on your hand and their gills move quickly, you can begin recognition training.

Do not tap hard or hit the fish tank repeatedly. You will shock your fish and make them dislike you.

You can train them for three to five minutes every day over a week. Soon they’ll recognize you and form a bond. Plus, once your fish can recognize you, teaching tricks will be easier.

Make sure your fish’s color is always bright and clear. The fins should have holes or tears, and the scales should be smooth. Your fish should not move in a lazy, sluggish manner. Instead, they should swim quickly. Bubbles on the water’s surface are a great sign that your fish is doing well. If you want to train your fish to recognize you, they need to be in top condition.

Do fish eat other aquarium fish?

Sick or weak fish get picked on by their tank mates. If a fish dies, other fish will quickly take advantage of the situation. Fish are opportunists, just like other living creatures. If food presents itself in any shape or form, they will eat it.

Do fish get lonely?

Some fish can get depressed and lonely if isolated for too long. Stressed fish often die very quickly.

How can I tell if my fish are happy?

You can tell if your fish are happy and healthy when they:

Are round tanks good for fish?

Round fish tanks are great for fish. Most round tanks have small water volume levels, and small fish are the best choice for these tanks.

2 thoughts on “Do Fish Recognize their Owners? and do they bond?”