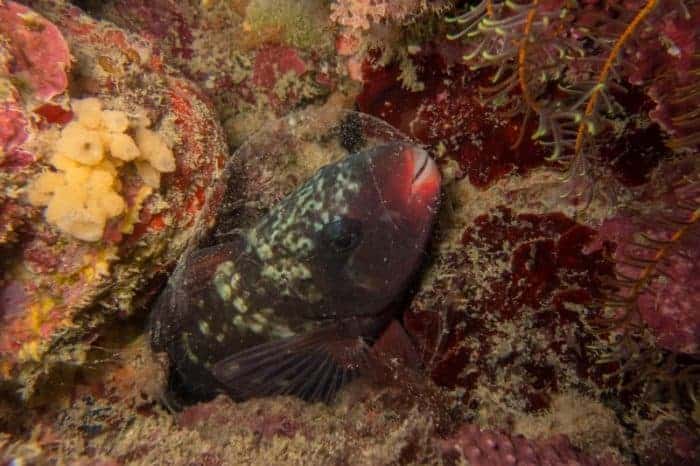 Watching a fish circling the tank day and night without any rest makes me wonder if it ever sleeps? Have you ever asked yourself if a fish ever sleeps? If it does, does that mean a fish sleeps with its eyes open?

In this article, I jot down everything you need to know about a fish sleeping. I’ll even talk about whether or not it suffers from insomnia like us. These are questions that need to be answered, and you know it.

Let’s dig right into it, shall we?

Getting a good night’s sleep or some amount of rest is incredibly important. A disturbed sleep routine could actually affect your health. Fish aren’t really that different, they also face health issues when they aren’t able to sleep. The only thing is, we rarely find a fish sleeping in the aquarium or a fish tank.

Do fish sleep? Honestly, I should’ve seen it coming; the answer is a resounding duh! Of course, it does. A fish does sleep, and yes, it’s with their eyes open. It’s creepy, I know! I’ll talk a bit more about it in depth later on.

So, yeah, a fish does sleep, but its a bit differently from the way we sleep. While we close our eyelids and get cozy in the bed, a fish simply lower its brain activity. So, the next time you see a fish circling around the fish tank, or if you catch it floating at one place for too long – don’t tap at the fish tank, its asleep-ish.

Why Do Fish Sleep?

When humans sleep, it gives the body some time to rest and recuperate. Our body goes through stages of sleep too. Without going into too much detail, let’s just say that a human’s sleeping pattern is a bit more complex. On the other hand, a fish has a simpler sleeping pattern.

Similar to humans, a fish sleeps to get some rest and recuperate. Sleeping can also be helpful in recovering from an injury or illness. Additionally, a diurnal fish has a similar sleeping pattern to humans – work in the day, sleep at night.

Does a fish dream? No. Unlike humans, our little friends don’t have a neocortex, the part of our brain which makes us dreamers.

How Do Fish Sleep?

So, now that we have established that fish do, in fact, go to sleep. The question arises, how on earth does it manage to do it with their eyes open?

When a fish falls asleep, it becomes inactive. The extent of their inactive behavior depends on every other species. There might be one species that will become completely inactive and float at the same place until it wakes up. Then, there are some species that would be mildly inactive; meaning, it will circle around the fish tank while being asleep.

I talked about it briefly in my previous article, but let me repeat it. The easiest way to explain how a fish sleeps is by reminding yourself what it’s like to daydream. While sleeping, a fish is in a semi-conscious state where it is still aware of its surroundings.

When Do Fish Sleep?

At night, some fish might actually go into hiding to find a place where it can rest. This proves that a fish has a sleeping pattern like its mammalian owners – humans. Interestingly, there are some nocturnal fishes too, which stay in hiding during the day, and at sunset, it comes to life.

Biologically, every animal, including fishes, have a hormone called melatonin. Because of this little hormone, our body is automatically exhausted by the time our sky turns dark. This only happens to diurnal animals – animals that habitually sleep at night. Melatonin has the opposite effect on nocturnal animals. At night, it is active, but during the day, it will feel exhausted due to the opposite effect of melatonin.

It is important to establish a proper sleeping schedule for the health of your fish. Here is a cautionary tale; once upon a time, scientists genetically modified a zebrafish to make it incapable of producing melatonin. As a result, it never goes to sleep, which is great. However, due to the lack of rest, the zebrafish suffered from anxiety and has a shorter lifespan.

Do All Fish Sleep In The Same Way? 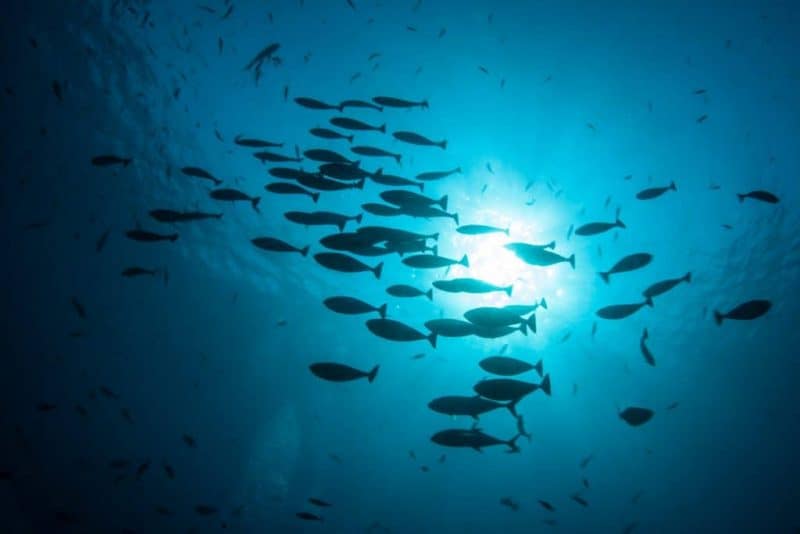 The fish will swim down to the bottom of the tank and rest. The way it appears, you might think its playing dead. Don’t worry, it’s just asleep.

Similar to how we use the comforter to cozy up, a fish finds burrows to comfortably sleep. It might camp out in those toy caves, or reefs.

Fun fact: Fish that burrow will keep moving while being fast asleep. This constant moving creates oxygen, which is actually important for the reef.

Do you see a fish just cruising through the waters aimlessly? It is probably sleeping. You might find its fins or tail moving, but it is really fast asleep.

A school of fish refers to a pack of fishes that swim together. In a school of fish, some fishes sleep, while others are on alert for predators.

In any case, regardless of how a fish sleeps, it is usually on alert for predators. If it ever senses a predator, the fish will wake up and quickly swim away. Not all fish species are like that, some fishes, such as Spanish Hogfish, sink to the bottom to let themselves get eaten.

How Long Does a Fish Sleep?

Scientists have been scratching their heads, trying to answer this question. The truth is it will vary from one species of fish to the other. You will also find fish that don’t sleep at all; it’s active and wide awake 24/7.

As soon as it gets dark, most fishes go inside the reef to sleep. Inside, it will become completely inactive until daylight. For such fish, which need a day and night cycle, I would suggest getting a timer to regulate the fish tank light evenly. This will ensure that the fish gets a healthy exposure to light and darkness.

Freshwater fishes, the ones who live in rivers and lakes, sleep for different time duration. Their sleeping pattern does change along the seasons. During colder months, a fish might sleep twice as much as it would in summer.

How Can I Tell My Fish Is Asleep?

It can be difficult to tell if your fish is asleep because of their monotonous swimming. To help you out, I got a couple of tips that can help identify if a fish is sleeping;

You could also look out for resting posture. Some fish sleep at the bottom of the tank or cover themselves in mucus, it is easy to identify these fish.

Look for a fish floating while zoned out, that’s your sleeping fish. If you are worried that the fish is just sick, keep an eye out for some of the following symptoms;

If your fish has any of the above symptoms, it is possible that it is sick.

How to Tell If Your Fish Is Sick or Asleep? 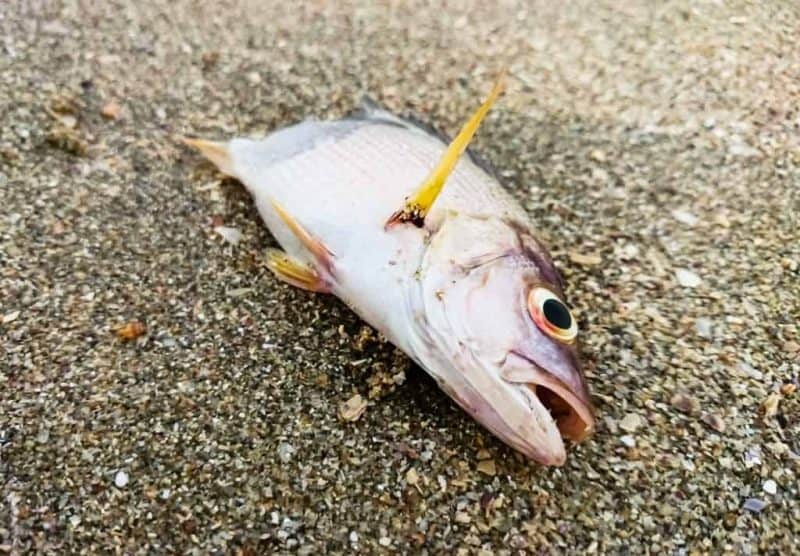 On the topic of sickness, I wanted to help clarify things a bit better. Hopefully, this part of the article will help you easily know whether your fish is sick or asleep.

1. Sleeping on the Back

So, a fish may sleep on its side, sure. But, if you catch it sleeping flipped on its back, the fish probably has a bladder disease. How can you prevent it? Don’t overfeed the fish. Overeating and too much air are some of the reasons why a fish might develop bladder diseases.

So, when your fish has bladder disease, it will swim sideways, and sleep on its back because of a disturbed sleeping pattern. There is an easy fix; separate it from others, stop feeding it for a couple of days, and keep him inside warmer water.

Has it been sleeping for way too long? I’d understand if you are worried if the fish is dead or alive. So, here is a checklist to help you check just that;

Why Do Fish Move while it Sleeps?

We already know that most fishes sleep differently, and some of them tend to keep swimming while asleep. The reason why it keeps swimming is to keep the water moving past their gills. Why? This helps maintain oxygen levels, which are needed to keep their body stable. You’d even find some fish that flip to the side when it goes to sleep; this sort of fish is swimming without a pelvic fin. The other type of fish that have gills called spiracles, which can let the fish stop swimming to get some rest.

Consider sharks for a moment; some of these guys tend to sleep swim. It shuts part of their brain to rest while their body continues to swim. How? It is theorized that these sharks’ spinal cords, not their brains, are responsible for movement.

Little fishes need to stay slightly aware, which is why it keeps swimming too. The little sense of awareness could be life or death for them. You can learn more about this in the deep sleep section ahead.

Can Fish Have Insomnia? 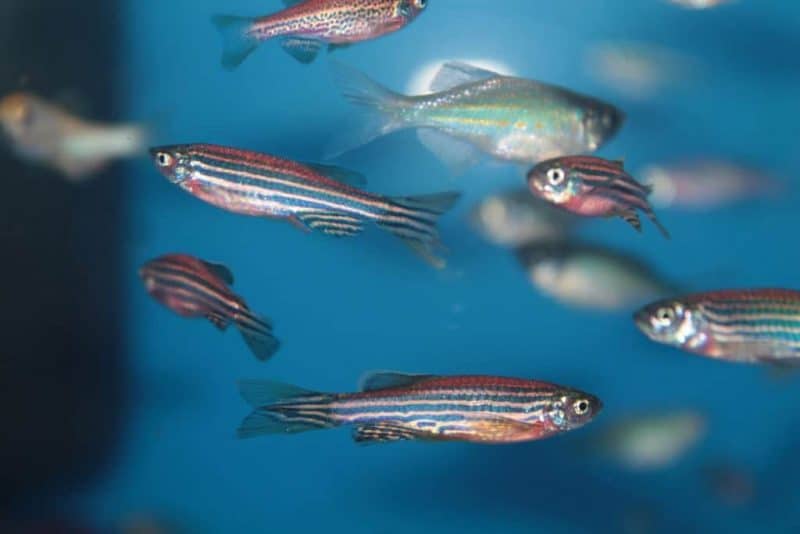 Remember the poor zebrafish from earlier? Yeah, those poor little guys are suffering from insomnia. The zebrafish has a mutant gene due to which it gets 30% less than a fish without that mutant gene. Interestingly, when the scientists tried to prevent it from sleeping, the zebrafish fell asleep. Alone, in a dark environment, the zebrafish tried to make up for lost sleep. In a well-lit water tank, it was naturally, wide awake.

To conclude, it seems like sleep is a part of the majority of animals’ biological systems, and in that case, it too can suffer from sleep deprivation. To establish a healthy sleeping routine for your fish, I would recommend getting a timer that regulates the fish tank light to ensure it is exposed to both day and night at a regular time.

Does a Fish Go Into Deep Sleep?

Deep sleep for a fish can be a life or death decision, which is why it doesn’t go into a deep sleep. If a fish were to go into a deep sleep, it is possible that a predator might eat them up. Normally, a fish stays semi-conscious to stay aware of any predator that might be nearby.

Alternatively, if you happen to be one of the sharks – the kings and queens of the waters, you can go into a deep sleep without any worries. Consider the bluehead shark for a moment; these guys are sleeping so deep, it won’t wake up even if you lift it out of the water using a crane.

Sure, it is a bit freaky to see a fish sleep with its eyes wide open, but it’s not like it has a choice. The poor little creatures don’t have eyelids. There is one fish that does have eyelids though, sharks.

What animals sleep with eyes open?

Here is a list of some animals that can sleep with their eyes open;

Which animal does not close its eyes while sleeping?

The ability to sleep with one eye open is a natural ability that was recently discovered in Wahlberg’s epauletted fruit bats. It isn’t the only animal that sleeps with its eyes open. Our marine friends, such as porpoise and bottlenose dolphins, are also used to sleeping with their eyes open. Then, we also have some birds that sleep with open eyes, namely; mallards and chicken.