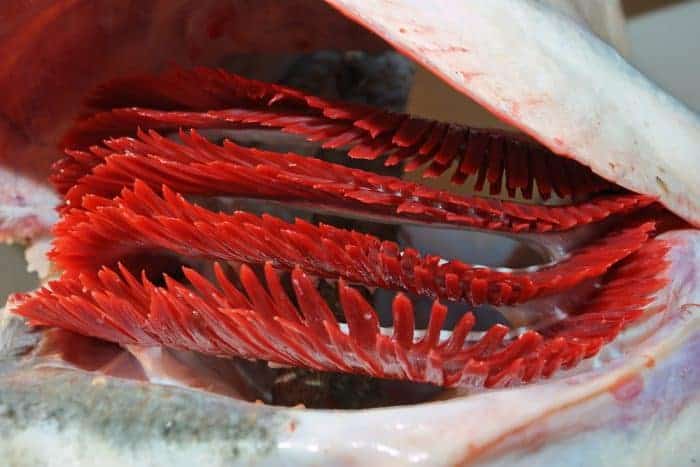 If I could magically be granted just one wish, I’d probably want the ability to breathe underwater. For those of you who swim, the most frustrating bit, if you’re anything like me, is having to resurface every few seconds to take a breath. Imagine how cool it would be if we didn’t have to do that. Speaking of which, it does make me wonder often how fish breathe underwater, so I did some research on it.

Fish do breathe. However, their breathing mechanism is very different from ours. Humans use their lungs to breathe. Within the lungs, oxygen from the air we breathe is absorbed into the blood, and carbon dioxide is diffused from the blood back into the air. Our lungs are so sensitive to water that even a few drops of water going into our windpipes can trigger a violent cough. Fish, on the other hand, use their gills –feathery, slit-like organs –to extract oxygen from water. Interestingly, when humans are tiny little embryos, they also have primitive slit-like structures that disappear later.

So, how are fish gills different from the human lungs? And what makes them capable of extracting oxygen even from salty ocean water? Why are our lungs so sensitive to water? And why were humans not lucky enough to be able to breathe underwater? I’ve worked hard to find the answers to these questions, so you don’t have to.

How Do Sharks Breathe? (Video)

How are gills structurally different from lungs?

At the very beginning of their development, the embryos of most animals look remarkably similar. Unless you’re an expert, you may not even be able to tell if the embryo you’re looking at would develop into a human, a chicken, or even a fish! But while the slits on a fish embryo will go on to give rise to its gills, those on a human will eventually form other important structures within the neck, such as glands and muscles. This is all thanks to evolution. There is plenty of evidence to support the theory that all forms of life can ultimately be traced back to one common ancestor. Over millions of years though, we have evolved to retain the characteristics necessary for our survival and lose what we don’t need.

Both humans and fish are vertebrates –animals that have a backbone. When it comes to body structure, you might think this is where the similarities between these two end, but that is not true. On a microscopic level, our lungs and the gills of fish work on very similar principles. Both the organs have a large surface area and are rich in blood vessels to allow efficient gas exchange. Our lungs can be compared to an elastic bag with millions of branches –the small, grape-like, alveoli. Since they are made up of elastic tissue, they can fill up with air with very little effort, and recoil to expel the air easily as well. However, because of their structure, they cannot function if flooded with fluid, and unlike air, expelling fluid from the lungs would require a lot of effort as well.

On the other hand, gills are composed of fine thread-like structures. Fish swallow water and then forcefully expel it through their gills over these strands. When a fish is taken out of the water, the strands in the gill quickly collapse, much like wet hair. The gills not only lose surface area but the cells within them also rapidly become dehydrated and die. In a nutshell, gills collapse outside water and fish suffocate.

How do fish extract oxygen from water?

Much like in humans, gas exchange in fish also happens through the process of diffusion. Diffusion is the process where gases travel from areas of higher concentration to areas of lower concentration. Oxygen from the water diffuses into the blood, and carbon dioxide from the blood diffuses into the water, just like in humans. As we have already established, the only major difference between gills and lungs is that one is designed to work efficiently underwater, and the other in the air.

Is there a difference between the gills of bony and cartilaginous fish?

Yes, there is. As a rule, bony fish have four pairs of lungs, while cartilaginous fish have five. Another major difference is that bony fish possess an outer covering of the gills or an operculum. The operculum is basically an outer covering for the gills, that closes when a fish opens its mouth and makes it easier for the fish to swallow water. Thanks to the operculum, bony fish can essentially drink water as humans do. Since cartilaginous fish like sharks do not have an operculum, they cannot create suction to swallow water. They have to constantly keep moving with their mouths open in order to maintain a flow of water through their gills. Boy, that sounds exhausting!

How do gills function in both fresh and saltwater?

Well, the simple answer to this is that the internal body environment of freshwater fish is different from that of freshwater fish. As we discussed earlier, diffusion requires the maintenance of a gradient. If you were to put a freshwater fish in salty or brackish water, the fish would quickly lose water from its cells and die. That is because of a process called osmosis, whereby much like diffusion, water flows down a concentration gradient.

So basically, water from the less concentrated body fluids of the freshwater fish flows into the more concentrated salt water. In order to prevent this from happening, the bodies of saltwater fish naturally have more concentrated fluids than those of freshwater fish. The process of gas exchange within their lungs is essentially the same, it is the internal body environment that makes all the difference. Some fish, like the Molly, are even able to alter their body environments and can thus live in both fresh as well as brackish or salty water.

So, what is the deal with the mudskipper?

Many of us have seen or heard of fish that can fly, jump, or breathe on land. Strangely enough, these are not folklore. Such fish actually do exist. Yet another marvel of the evolutionary process is that some fish, especially those that inhabit shallow swampy waters, have learned to breathe air since there isn’t much oxygen in the surrounding water. Some like the mudskipper use their skin to breathe, much like frogs and other amphibians, while others have developed special organs for air-breathing. What is even odder is that there is a class of fish called obligate air breathers, that must come to the surface to breathe air every now and then.

Are there any fish that do not require oxygen?

Strictly speaking, no. Except for a few simple microorganisms, all forms of life do require oxygen for their survival. On a cellular level, oxygen is required for the efficient utilization of food and the production of energy. Some species of fish, however, are capable of temporarily slowing down their metabolism and surviving without oxygen. This process is similar to what happens in our own muscle cells during vigorous exercise. When the oxygen demand exceeds oxygen supply, a process called anaerobic respiration begins, resulting in the formation of lactic acid. While our muscles can only carry on without oxygen for a few minutes, and ultimately start aching and cramping, some fish, such as goldfish, can go on for several months without oxygen. They slow down their bodies so only the most vital functions are occurring, and do so until adequate oxygen is available again.

Because the concentrations of oxygen in water can be highly variable, all fish have adapted in some way or the other to respond to low oxygen. Most fish would increase their speed in response to sudden oxygen drops in order to be able to escape to waters with more oxygen. They can slow down their metabolism for varying time periods, and their bodies become more resistant to the waste products formed from anaerobic respiration.

Just like terrestrial animals, aquatic animals also require oxygen to survive. Through evolution, all living things have developed characteristics that make them most suitable for surviving in their habitats. While higher vertebrates like humans developed lungs, fish and amphibians retained gills –specialized organs for breathing underwater. These, along with many adaptations for low oxygen conditions, enable fish to survive in waters with varying oxygen concentrations and salinity.