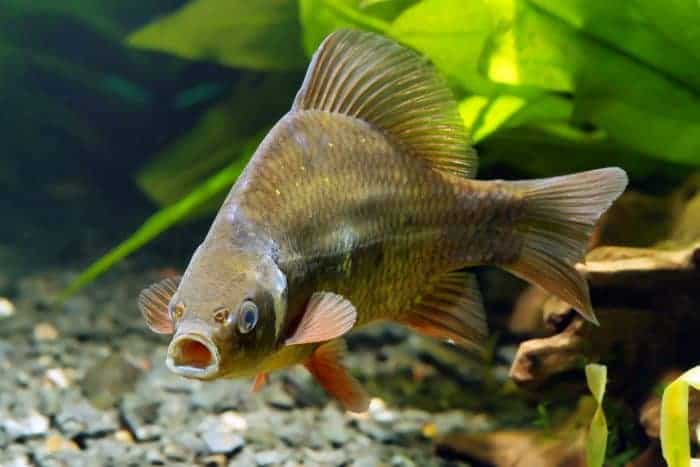 I’m in a serious relationship with my pet fish. Yes, you heard it right. Providing them with the best habitat, feeding them the best food, and then just watching them playing around are my things to do in leisure hours. The most “wow” moment comes when my fish yawn which kills my weariness and makes me love them even more. But at times, I feel like they yawn, maybe, because they’re too bored of the same surrounding? So, before changing aquarium ornaments and adding some new friends (more fish) for my fish, I decided to browse about why fish open their mouth wide open? Do they really yawn? And why they do that?

Here’s what I found out:

Yes, fish do open their mouths as if they’re yawning. But not for the reason we humans yawn. Fish “yawn” to give sexual, aggressive or territorial displays and to cleanse their gills to absorb maximum oxygen from the water to meet their high oxygen requirements.

Keep reading to know why it’s not good for your fish to yawn frequently and what to do then.

Also, yawning increases the oxygen level in the body and thus speeds up your metabolism.

All mammals yawn and this yawning is to cool their body temperature and increase oxygen supply. That is why, yawning makes mammals fresh. Other animals like birds and reptiles yawn because of aggressive behavior or courtship rituals. Wondering about fish? Let’s find out now. 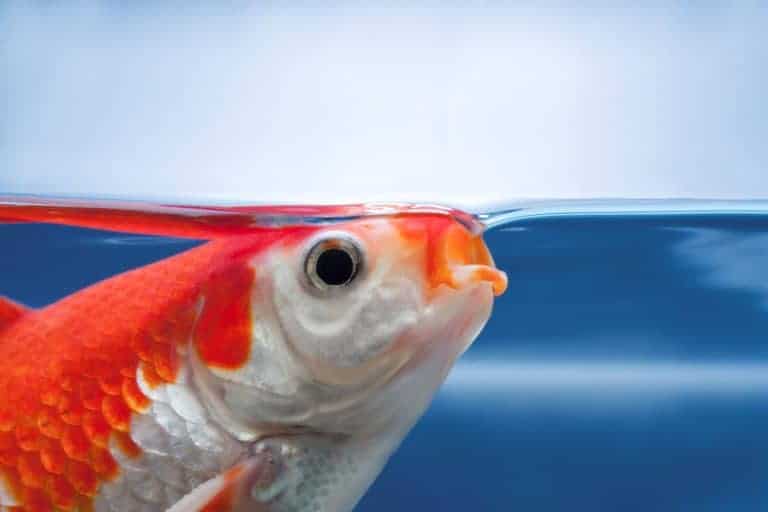 I’m sure you’ve seen your fish open their mouth wide open as if they’re yawning.

To answer the question, yes, fish appear to yawn. They open their mouth, let the water in, and then flush it through their gills. The cool term for this is “buccal pumping“.

But fish don’t yawn for the reasons we yawn and also their yawning isn’t contagious! Contagious yawning is seen in mammals, reptiles, and even birds.

Many fish seem like yawning just like we do. Stickleback fish open their mouth accompanied by raised spines and flexed body. It appears just like they are yawning followed by a stretch. But we have to keep in mind that they don’t do this to cool down their body temperature. Fish also don’t yawn as we do just after waking up.

So, if fish appear to yawn but not for the reasons mammals do, then why they open their mouth like they’re yawning? Let’s get an insight into it.

Why fish open their mouth wide?

Fish yawn but not to cool their brain temperature. Fish are ectotherms (cold-blooded) which means their body temperature depends upon the external environment. So, their brain doesn’t warm up and thus they don’t yawn for this reason.

Fish yawn or open their mouth wide because of other reasons like:

Fish breathe through their gills. As water passes through the gills, many small unwanted particles also stuck to them. This can hinder a smooth gas exchange and fish can be in real trouble if their gills continue to clog.

For cleansing their gills, fish open their mouth (yawn) and allow water to enter the moth and leave the body via gills. In this way, all the unwanted particles flush away and fish can breathe normally.

This cleansing process is normal and all fish do that. They don’t seem restless while doing this but they just look like lovely creatures yawning and stretching!

Reaction to a threat and sexual display: 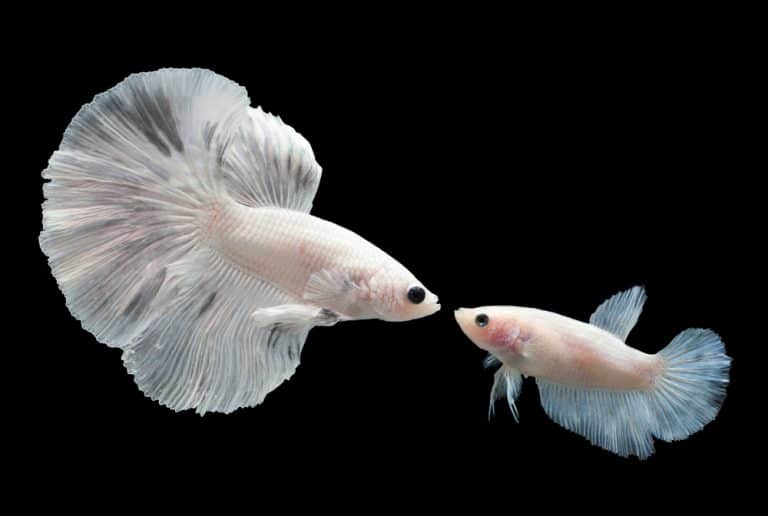 Fish open their mouth wide as aggressive behavior towards an intruder. Fish protect their territories so that they can live safely and get access to their mates to produce offspring.

Male fish especially show this behavior to keep their territory safe for intrasexual activity. Female fish yawn to attract male fish by making sounds and directing them towards their mates.

Not only fish but many other animals like reptiles and birds yawn to show aggression or signal for mating.

Many fish ranging from cartilage fish to bony ones, filter feed. Filter feeding is the process of literally filtering small food particles from the water.

Fish open their mouth wide and allow water to come in the mouth. The food particles are filtered from water and eaten. The water is then excreted out through gills.

While fish are filter-feeding, their mouth opens for a relatively greater time than in the case of a yawn. 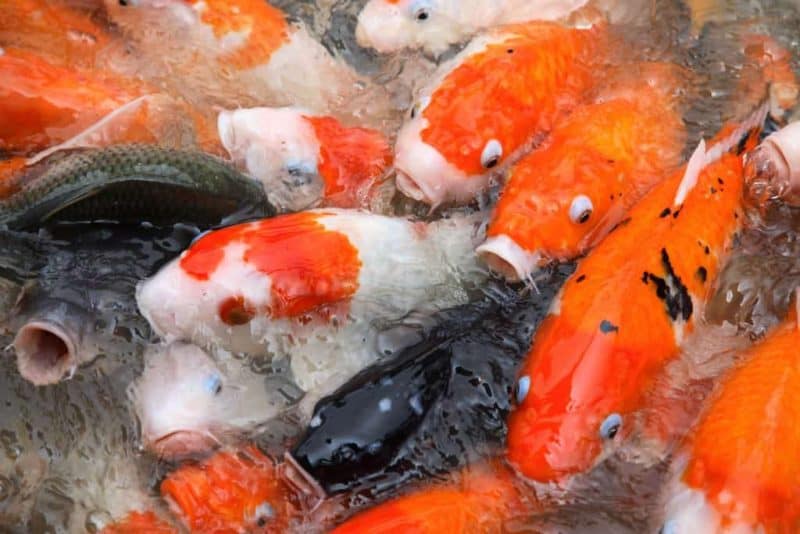 If you feel like your fish’s open mouth seems like more gasping and less yawning, then it’s due to the lack of enough oxygen in the water. Fish find it difficult to breathe and thus they keep their mouth open, restlessly.

The water becomes oxygen-poor when it remains stagnant and/or is heavily populated. In fish tanks, the oxygen level can be increased by producing water currents continuously through filters and air pumps.

Nitrates are very dangerous for your fish. Nitrates accumulate due to waste of fish which remains in their tank for a long time.

In this case, fish seem restless and open their mouth to breathe properly, which is difficult if the water is high in nitrates.

Is it normal for a fish to yawn?

It is totally normal if you see your fish yawning. Actually, it’s a behavior they show to feed, protect themselves, and attract their mates.

But in some cases, yawning or opening mouth wide open is a sign your fish is restless and is asking for your help. This type of “restless yawning” is discussed below.

When you should worry about your fish yawning?

When your fish is gasping and opening its mouth while coming to the surface, then it’s time to change the water altogether. Fish show this behavior because of a lack of absorbed oxygen in the water and they can’t breathe properly. Less dissolved oxygen in water results in difficult breathing and if nothing is done to increase the oxygen level in the water then you might die as well.

Don’t ignore this and see what you can do to increase the oxygen level in the water. You can change the water, install an efficient filter and air pumps, and add some plants. These steps will make your fish breathe normally. Your fish will not gasp but will only yawn which is normal.

Fish open their mouth wide and appear to be yawning. But the reason for this behavior is different than we humans. Yawning is often explained as a physiological change to cool down brain temperature and increase the oxygen levels in the body.

Fish yawn to show aggressive behavior, to attract their mates, and to cleanse their gills for efficient breathing. Many fish are Filter feeders and they also open their mouth as if they’re yawning.

If your fish is gasping and opening its mouth frequently then it’s time to change the water because fish do this when there is a lack of oxygen in the water.

So, yes your fish open their mouth and stretch their bodies just like yawning and it’s normal (until they’re gasping).