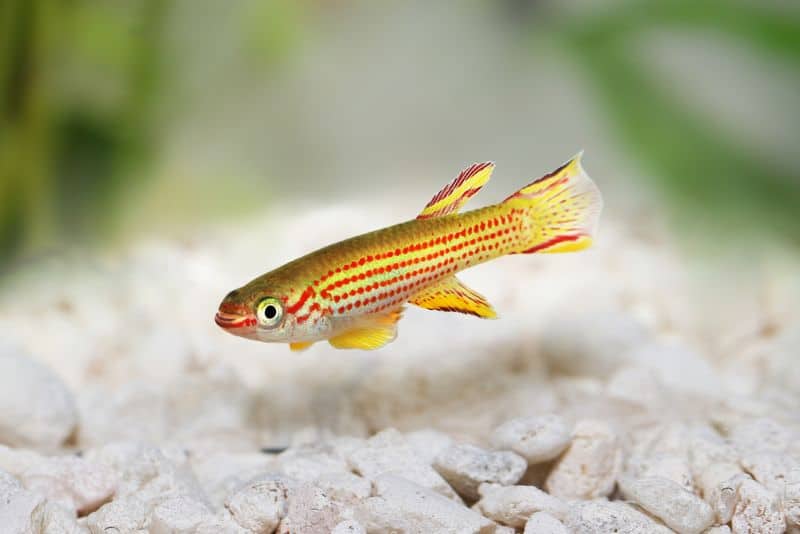 A commonly prevailing conception about Killies is that they stay peaceful and do not show any aggression toward other fish as long as they are kept in pairs.

Wish to learn more about Killies?

Keep reading as I share with you more in-depth information about keeping Killies in pairs, its effects on their behavior, their ideal living conditions and much more.

Behavior of Killies In Pairs

While Killies are generally a very peaceful species of freshwater fish, when its two genders are compared, the males are known to show more aggression toward each other and sometimes even toward males of other species of fish, especially in a community tank environment. Hence, I suggest all beginners to keep Killies in pairs and in species-specific tanks.

But for experienced aquarists out there, keeping Killies in larger community tanks is also recommended. In fact, they are so beautiful that they make quite a bright and colorful addition to community tanks. However, if you just wish to keep Killies in your tank, make sure you provide a lot of hiding places and the perfect population ratio in there.

So, what is the ideal population ratio, you ask?

Well, I’ll try to answer this without complicating the subject too much. Whether you wish to keep your Killies in a species-specific tank or a community tank, you need to make sure that you have at least 3 female Killies for every male Killi in that tank. The number of females per male Killi can go up to 5 females but no less than 3.

Male Killies go after females a lot. By putting in fewer than 3 females for every male, you risk the life of female Killies as constant persuasion by males exposes them to a state of great stress which can ultimately kill them.

However, if you plan to just keep females, you need not worry about the count. Any number of female Killifish is acceptable as they can easily survive together in a group.

One thing to keep in mind about Killies though, is that they are magnificent jumpers and can jump to great heights. So, remember to place a hood on your tank.

And, speaking of tanks;

Let’s discuss a little about tank requirement for Killies.

The information I share here is especially for those of you who are just starting out your fish keeping hobby and those who have absolutely no experience keeping Killifish.

To be totally honest;

It isn’t very challenging or hard to replicate the natural living conditions of Killifish inside a tank.

While it could vary depending upon the species of Killies you plan to get, a 20-gallon tank does just fine for a regular pair. The tank needs to be shallow with still water, live floating plants and gravel covering the bottom. And don’t forget to cover the top of the tank or you could end up collecting them from the floor all day.

But that’s not all;

You still need to learn about the water conditions. Fortunately, I have covered them in the next section.

Just like the size of the tank, the water conditions also depend on the species of Killifish you wish to get.

While most can survive in freshwater easily, there are certain species that require saltwater to thrive. But since those are very few, I will be discussing the more common freshwater conditions.

The water temperature needs to be anywhere between 72 to 75 degrees Fahrenheit. These temperatures can be easily attained with the use of an ordinary tank heater.

A tip for all the pros out there:

if you have a room full of tanks like I do, heat the room instead of investing in individual heaters for every tank, the result is much better and uniform.

Sharing the right pH balance here is tricky as each type of Killi has an individual preference. Some enjoy greater levels of alkalinity while others thrive in acidic environments.

Specifically research for the type of Killi you plan to purchase to get the pH levels right.

As far as water hardness is concerned, it is not that critical and Killifish can survive in the water with 120 to 160 ppm.

For your assistance, here is a recap of all the tank parameters for Killfish:

From the beginning, I have mentioned many times that Killies are a peaceful species of fish which makes them a good choice for community tanks.

As true as it is, not all fish settle well with Killies. But the setup of your tank, its size and water conditions can be the deciding factor on what type of other fish can peacefully coexist with your Killies.

Given their timid and peaceful nature, they can commonly share the tank with Platies, Danios, Tetras, Rainbows, Rasboras, smaller Catfish and other small hardy species of fish.

I think it is important to mention here that you may find it difficult or nearly impossible to breed Killies in a community tank. If that is your purpose, keep them in a species-specific tank.

Let’s talk a little about breeding your Killifish, shall we?

I mean, what’s the use of keeping them in pairs if you do not enjoy breeding them and raising their extravagantly colorful fry, right?

The fact of the matter is, many expert and pro aquarists only get Killies because they are one of the easiest fish species to breed only if you can get it right. They have two distinct types of reproductive nature:

The annual Killies have a lifespan of no more than a year. Hence, they reach maturity quickly and the females die soon after they have laid the eggs.

They require moss substrate or sand inside the tank to hide their eggs.

Once the eggs have been laid, the pair should be moved from the breeding tank and its moss is to be kept moist and warm for about 3 months in a dry tank.

Add water back into the tank once this duration has passed to hatch the fry.

With non-annual Killies, the breeding process is even simpler.

They have a much longer lifespan and all they require are some plants in their tanks to lay their eggs on.

Once the eggs have been laid, the pair should be removed from the tank or they can eat their own eggs.

After the pair has been removed from the tank, the fry will soon start to hatch. You do not need to dry the tank or wait 3 months.

While Killies are fun to keep, they can be hard to maintain for beginners with zero experience. If you are a beginner, I suggest you join a social group of Killifish enthusiasts to find support in your journey or you can keep visiting this blog for regular advice and tips on fish keeping.

How many types of Killifish are there? More than 1200 types of Killies are found in the wild. The most common ones are from Africa and include Aphyosemion, Epiplatys, and Fundulopanchax. All these types further include subcategories of Killies and are commonly known by their scientific names. Apart from the African Killifish, there are a few North American and European species of the Killies available as well.

Between Annual and Non-Annual Killifish, which ones are better for beginners? Because of their longer lifespan and easier breeding process, I advise all newcomers and beginners to go for non-annual Killies. Once you have bred them a couple of times and find yourself an expert in the process, only then give annuals a shot.

Why are Killifish so expensive? Killifish are hard to find in your usual pet store or aquarium. They are mostly sold online by hobbyists or fish enthusiasts who breed them in their home tanks. This makes most of the Killifish exclusive to just a few sellers resulting in high costs. And if you come across a color that is unique and hard to find, you can expect the price to go even higher.